With AstraZeneca’s vaccine trial still on pause in US, questions abound about study participants’ mysterious illnesses 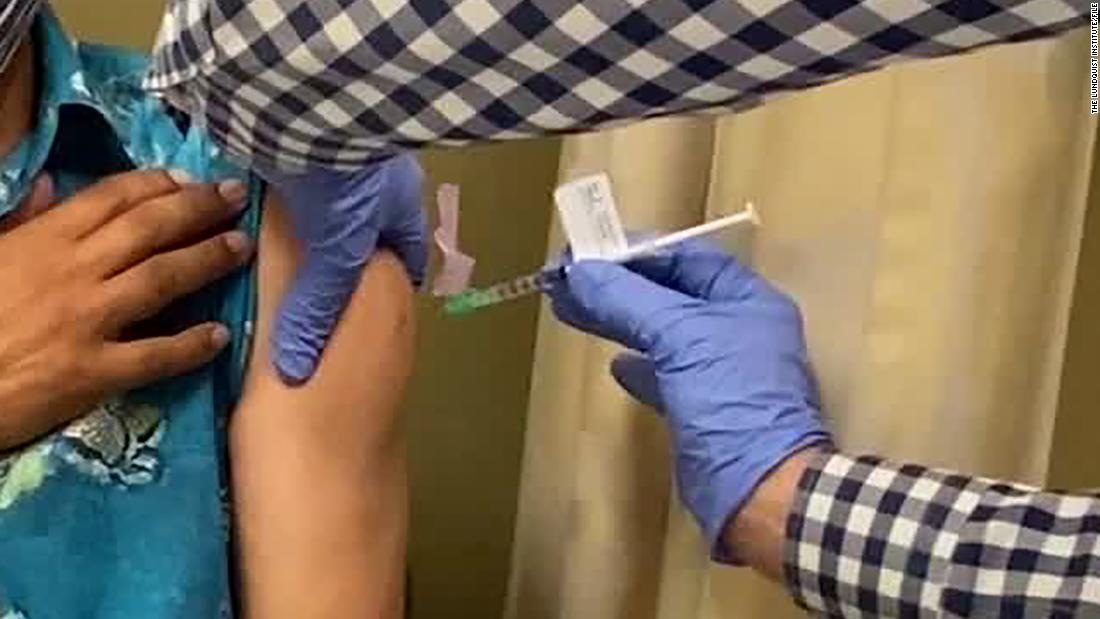 The trial has been on hold in the United States for more than two weeks, and regulators face the task of trying to figure out if these illnesses were random and disconnected from the vaccine, or if they are related to the vaccine.

AstraZeneca and its partner, the University of Oxford, have given various accounts of the sick volunteers.

“Those are very different statements,” said Dr. Harlan Krumholz, a professor at the Yale School of Medicine, after reading accounts from AstraZeneca and Oxford about the first participant’s condition. “Their information should be consistent, and when it’s not consistent, that raises questions.”

Krumholz and other scientists said the nature of the participants’ neurological illnesses matter. If the two study subjects had similar conditions, that would raise more questions about whether the vaccine was to blame. If their conditions are different, that might suggest that they were random and not the result of the vaccine.

“That’s why this is so shocking to me — these are both neurological diseases, and that by itself is a red flag,” said Slifka, a professor at the Oregon Health & Science University.

On its website, Oxford wrote that the volunteers’ illnesses “were either considered unlikely to be associated with the vaccine or there was insufficient evidence to say for certain that the illnesses were or were not related to the vaccine.”

AstraZeneca’s CEO, Pascal Soriot, said at an event Thursday that “we should place safety at the center of everything you do.”

The clinical trial for AstraZeneca’s coronavirus vaccine has already resumed in other countries, including the UK. A company spokesperson said they’re working with US regulators to resume the trials in the US as well.

“We are continuing to work with the FDA to facilitate review of the information and the agency will decide when the US trial can resume,” the spokesperson wrote in an email.

An FDA spokesperson declined to comment, referring CNN to AstraZeneca.

The nation’s top infectious disease doctor told CNN on Monday that AstraZeneca and Oxford will have to carefully watch for any other volunteers who develop similar symptoms.

“What this triggers is extra alertness as trial goes forward — if it goes forward — on the part of the clinical trials sites to look out for anything even remotely similar, to see if there are any additional cases,” said Dr. Anthony Fauci, director of the National Institute of Allergy and Infectious Diseases.

Slifka and other scientists said they’re pleased that the FDA is taking time to consider whether the trial should be allowed to resume in the United States.

“It makes sense that the FDA wants to keep on digging,” Slifka said.

Spokespersons for the University of Oxford and AstraZeneca spokespersons declined to answer specific questions about varying accounts of the participants’ illnesses.

On its website, Oxford notes that as of September 12, “globally some 18,000 individuals have received study vaccines as part of the trial. In large trials such as this, it is expected that some participants will become unwell and every case must be carefully evaluated to ensure careful assessment of safety.”

“All trial investigators and participants will continue to be updated with the relevant information, and this will only be disclosed according to the clinical trial and regulatory standards. We are committed to the safety of our participants and the highest standards of conduct in our studies and will continue to monitor safety closely,” according to another university statement.

In a statement, a university spokesperson said Oxford does “not offer access to individual patient data as per guidelines in clinical trials.”

AstraZeneca told CNN that “to maintain trial integrity and protect the privacy right of patients enrolled in trials, serious adverse events are communicated to trial investigators, independent data safety monitoring committees, and health authorities during the study. It is important to note that events are assessed and evaluated over time by these parties as additional information is available.  These events must be reported to health authorities and investigators and may require safety updates to the consent form and notification of patients in an ongoing protocol.  Such events may have an impact on the conduct of the study.”

AstraZeneca and the University of Oxford announced the two neurological illnesses earlier this month.

In an information sheet given to study participants, the University of Oxford mentions “volunteers” who developed neurological symptoms, but does not specify how many.

When CNN asked how many study participants had developed neurological problems, AstraZeneca and the University of Oxford declined to answer.

Of the two study participants who are known to have become sick, the first illness occurred in July.

That volunteer’s condition wasn’t announced until September 9, when AstraZeneca wrote in an email to CNN that this patient was found to have “an undiagnosed case of multiple sclerosis.” The study then went on a “brief trial pause in July while a safety review took place,” and an independent panel then concluded the condition was “unrelated to the vaccine,” according to the email.

However, an older version of a participant information sheet lists a different neurological condition.

These are the accounts that Krumholz, the Yale physician, said seemed inconsistent. He said it was still unclear if the participants developed similar illnesses that might have been caused by the vaccine.

“All of this is really big stuff,” said Krumholz, director of the Center for Outcomes Research and Evaluation at Yale.

On September 8, AstraZeneca said a volunteer’s illness in the UK had triggered a pause in the trial.

At first, AstraZeneca and Oxford called it an “unexplained illness.”

The trial was paused worldwide while the illness was investigated. Four days later, it was announced the trial had resumed in the UK.

At the time, the university said safety data was reviewed by an “independent safety review committee and the UK regulator, the MHRA,” the Medicines and Healthcare products Regulatory Agency.

On September 17, CNN reported that an internal AstraZeneca document, labeled an “initial report,” said a previously healthy 37-year-old female volunteer had suffered transverse myelitis. The report was sent out to doctors who are running the study’s clinical trial sites.

The most recent Oxford participant sheet says the volunteers’ illnesses underwent “independent review,” and were found to be “either considered unlikely to be associated with the vaccine or there was insufficient evidence to say for certain that the illnesses were or were not related to the vaccine.”

But they don’t explain how the reviewers came to that conclusion.

Dr. Paul Offit, an infectious disease expert at the University of Pennsylvania, said AstraZeneca and Oxford should explain why they consider the illnesses to be unrelated to the vaccine.

Krumholz, the Yale physician, agreed. Hundreds of millions of people could be asked to take this vaccine, and incomplete information about these volunteers’ illnesses will only plant doubt in people’s mind, he said.

“They really need to get people to trust the process,” he said.

AstraZeneca and Oxford have repeatedly stated that they can’t reveal certain pieces of information due to confidentiality concerns for the study participants.

The scientists, however, say the company and the university have not been consistent in how they apply these confidentiality concerns.

For example, AstraZeneca nor Oxford have not identified the second volunteer’s final diagnosis, citing confidentiality requirements.

But AstraZeneca has given a diagnosis — multiple sclerosis – for the first patient. The company has not explained why confidentiality rules constrain them from giving a diagnosis for one patient and not the other.

The company has not denied a report in STAT News that said AstraZeneca CEO Pascal Soriot discussed the second volunteer’s diagnosis on a phone call with investors.

Scientists say they’re concerned about inconsistencies from the company.

“If you can’t speak because of confidentiality, don’t do it in front of your shareholders,” Offit said. “This choice to give incomplete or shifting information — what do you make of that? I don’t think you can make anything of that, other than that you’re not getting the whole story.”

Offit is a member of the FDA’s Vaccines and Related Biological Products Advisory Committee, which is expected to review drug companies’ applications to put coronavirus vaccines on the market.

In a statement to CNN, AstraZeneca said that on September 19 they published the protocol for their study. Two other companies developing vaccines, Moderna and Pfizer, had published their protocols two days before.

“Given the unprecedented global impact of the Coronavirus pandemic and the need for public information, AstraZeneca has published the detailed protocol and design of our AZD1222 clinical trial. Good clinical practice (GCP) and regulatory standards dictate the information we share is tightly controlled so as not to unduly influence or bias clinical studies. Typically in clinical development, protocols are not shared but in this instance because of the increased scrutiny we have shared our US FDA protocol.
At a Thursday event at the World Economic Forum, Soriot, the AstraZeneca CEO, said his company has been considering how much transparency is possible to provide.

He added that once regulators approve a vaccine, the public should have confidence in it.

“You really have to love conspiracy theories to believe that all regulators around the world will all agree to uphold a vaccine that is not safe and effective,” Soriot said. “People have to accept that they have to trust someone at some point.”

Offit said if AstraZeneca is going to reveal some pieces of medical information about the two study subjects, it should be completely clear about their diagnoses, and what that means for the safety of the vaccine.

“This choice to give incomplete or shifting information — what do you make of that? I don’t think you can make anything of that, other than that you’re not getting the whole story,” he said.

CNN’s John Bonifield and Sierra Jenkins contributed to this report.