When school isn’t safe: ‘You feel like you are sending your child into a lion’s den’ 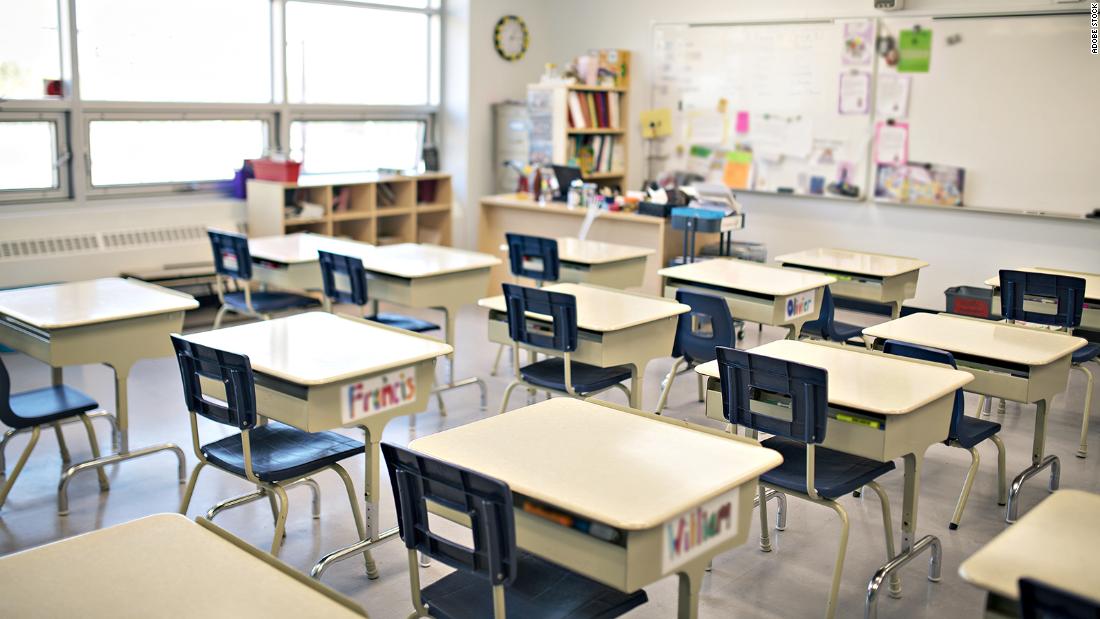 “We had never seen that seating chart before,” Nathan told CNN. “That makes it real.”

CNN is not using Nathan’s actual name or otherwise identifying parents or the school to protect the privacy of the children and teachers involved.

Back in May, when it was learned the teacher and some of her students had Covid-19, parents say they were given minimal information about what happened.

But Marin County’s health department did a careful contact tracing investigation that revealed in startling detail how, despite considerable precautions, the teacher passed the virus to her students, who then infected other students and family members.

The US Centers for Disease Control and Prevention highlighted the investigation last week in its weekly report on death and disease, the MMWR. It included a seating chart that showed eight of 10 students in the front two rows became infected, evidently when the unvaccinated teacher took off her mask to read aloud to them. It did not identify the school or staff.

Nathan says his young child was in the classroom — among the students at the back of the class and so was not infected.

But he feels confused that the teacher was allowed to remain unvaccinated and came to school with symptoms she thought were allergies but which appear to have been Covid-related, and that she felt free to take off her mask in class, however momentarily, despite school regulations.

“It really does sober you up to the reality of the pandemic,” Nathan told CNN. “I didn’t think it would hit so close.”

He said his family had taken many precautions to stay safe throughout the pandemic.

“There’s not, like, an anger at the teacher. It’s more disappointment,” Nathan told CNN. “She is a lovely young woman, so I don’t think she did this maliciously. But there are questions around trust.”

The school does not require vaccinations, although California made teachers a priority group when rolling out coronavirus vaccines earlier in the year. California will require all teachers and other school staff to be vaccinated or to submit to regular testing starting in mid-October.

“As adults, I feel like we have such responsibility during the pandemic to protect these kids,” Nathan said, noting that children under 12 are not eligible for vaccination.

“If we are opening our schools and having our children inside classrooms, it the responsibility of all adults to do whatever we can to keep them safe.”

The school does have strict coronavirus protocols posted on its website. It says parents must fill out a form each day attesting that their children do not have any Covid-19 symptoms and have not been exposed to coronavirus. Teachers and staff must do the same.

“We were told, as parents, that if our child showed any symptoms we were to stay home,” Nathan said. “Why didn’t a teacher take the same action?”

The timeline and genetic fingerprints of the viruses that were tested leave little doubt as to who infected whom.

“The teacher reported becoming symptomatic on May 19, but continued to work for 2 days before receiving a test on May 21,” the Marin County team reported in last week’s Morbidity and Mortality Weekly Report. Students in her class began experiencing symptoms on May 22.

“On occasion during this time, the teacher read aloud unmasked to the class despite school requirements to mask while indoors,” the team added. “Beginning May 23, additional cases of COVID-19 were reported among other staff members, students, parents, and siblings connected to the school.”

The school did not respond to requests from CNN for comment. The Archdiocese of San Francisco, which operates the school, issued a brief statement to CNN calling it an “isolated incident” that was handled internally.

“The Archdiocese of San Francisco’s Department of Catholic Schools follows CDC guidance as well as state and local protocols to ensure the safety and security of our school communities,” it read.

“We are grateful for the many sacrifices made by parents, faculty, staff and more than 23,000 students that allowed our schools to reopen last year and for their continued efforts in dealing with an unprecedented and evolving health crisis.”

But it’s far from an isolated incident. What made the Marin County case exceptional was the degree to which public health officials could document what happened. But schools nationwide are struggling to quarantine students after exposures, battling parents who either demand mask mandates or demand that no one even ask their children to wear masks, and debate whether to require teachers and staff to be vaccinated.

A CNN analysis shows at least 21,869 students and 4,481 employees have tested positive for Covid-19 throughout the 15 largest school districts in Florida since the start of school. Another 45,024 students and staff members have been quarantined or put on “stay home” directives due to possible exposure to Covid-19.

In Texas, 20,256 students and 7,488 employees have tested positive for Covid-19 in districts that returned to school in August. Texas Gov. Greg Abbott has banned masks in schools and virtual learning options, although some districts are challenging the mask ban and requiring them in their schools.

Perhaps most of all, schools are struggling to communicate with frightened, confused and often angry parents.

In Raleigh, North Carolina, Ann is keeping her 8-year-old son home from the small, private religious school he attends for fear he’ll be infected.

“We’ve had 18 cases in a week,” she said. “It would be easier to have him in school. but it feels safer to keep him home.”

Ann, who also wishes to protect her identity for her son’s sake, sent CNN a photograph of the school’s pastor delivering a sermon to a room full of masked children while not wearing a mask himself.

Ann and Nathan both say their schools refuse to tell parents whether teachers and staff are vaccinated, and they have provided few details on how students or staff may have become infected — although they do report positive coronavirus cases to parents.

Both Ann and Nathan feel their schools are not doing enough to protect their kids.

“They are putting K through third graders in the lunchroom at the same time — that’s 150 children for 30 minutes unmasked,” Ann said.

The North Carolina school accommodates remote learning with cameras in the classroom, but Ann said she is looking for other options.

“The last week and a half has been sleepless and exhausting. You feel like you are sending your child into a lion’s den,” she said.