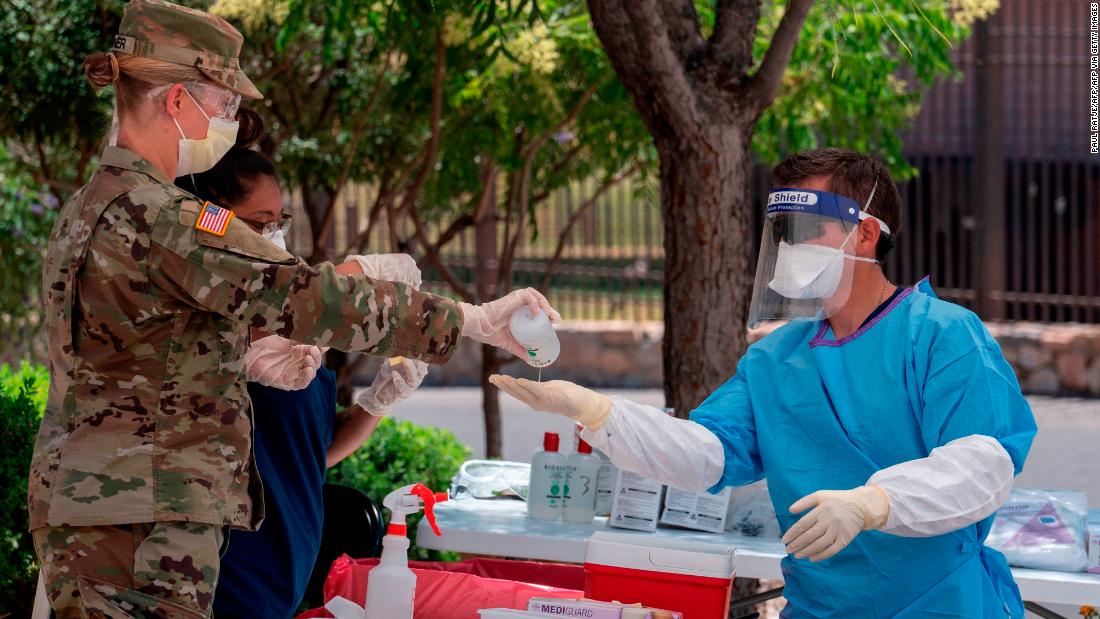 At least 40,173 new cases were reported, according to a tally by Johns Hopkins University. The previous daily high was reported on Thursday.

“To one extent or another, the volume of new cases coming in is a reflection of a great success in expanding testing across the country,” Pence said.

At least nine other states have announced they are not moving ahead to the next phase of reopening. Those states are Arizona, Arkansas, Delaware, Idaho, Louisiana, Maine, Nevada, New Mexico and North Carolina.

“This is a problem. We can spin it in all sorts of different ways. But the reality is that not only are things bad, they’re as bad as they’ve ever been right now with regard to daily new infections,” said CNN’s Chief Medical Correspondent Dr. Sanjay Gupta.

In Texas, one of the earliest states to begin reopening, Gov. Greg Abbott has “paused” the state’s phased economic reopening. On Friday, he ordered further restrictions on businesses, including a requirement that bars remain open only for delivery and take-out and requiring local officials to approve any gatherings of 100 people or more.

The nation’s second most-populous state, Texas reported a record 5,996 new cases on Thursday and another 5,707 cases on Friday.

“At this time, it is clear that the rise in cases is largely driven by certain types of activities, including Texans congregating in bars,” Abbott said Friday in a news release.

The federal Health and Human Services Department announced Friday it will continue its support to Covid-19 testing in Texas by allowing allow federal testing sites to operate for an additional 14 days.

But in Florida, where new cases hit almost 9,000 in just one day, Gov. Ron DeSantis told reporters on Friday that the surge was the result of a “test dump.”

“Really nothing has changed in the last week,” the governor said, adding that new cases involved younger people, typically asymptomatic and were primarily due to community transmission.

“For goodness sakes: avoid crowds, wear masks. Those are the fundamentals that — when you look at the television clips, when you see pictures in the newspapers — people are not doing that. That’s a recipe for disaster,” Fauci said during an interview with CNBC’s Meg Tirrell.

Nationwide, almost 40,000 coronavirus cases were reported Thursday, surpassing a previous one-day high on April 24, according to Johns Hopkins University. The country is averaging more new cases per day than ever, with a seven-day average of 33,035 on Thursday, a CNN analysis of the Johns Hopkins data shows.

Like Texas, several states, including Arkansas, Georgia, Tennessee and Utah, were reporting their highest number of new daily cases on Friday.

“We have to save lives at this point,” he told CNN.

Between 5 and 8% of Americans infected

And while more than 2.4 million cases have been diagnosed nationwide since the pandemic started, the number of people who have been infected is likely to be 10 times as high. Antibody tests show more than 20 million people have been infected with coronavirus, most of them without knowing it, said Dr. Robert Redfield, director of the Centers for Disease Control and Prevention.

Antibody tests examine a person’s blood for signs that the immune system responded to an infection. Federal officials have been conducting such tests nationwide to determine how many people had past undiagnosed infections.

Between 5% and 8% of Americans have been infected with the coronavirus, with the numbers varying by region. New York, once the epicenter of the pandemic, will have a higher percentage of people with past infections than some states in the West, Redfield said.

That means 90% or more have not been infected and are susceptible to the virus, highlighting the need to act aggressively to combat rising infection rates, he said.

Some cases went unnoticed partly because testing was at first limited to people who were very ill, Redfield said. As more people get tested, he added, it’s clear a large percentage had mild symptoms or none at all.

“Pool testing” mixes several people’s virus test samples into a batch, or pool, and then tests the pooled sample once. If it comes back negative, then all people in the batch can be eliminated at once. If the result is positive, each person’s sample gets analyzed individually.

The mass screening proposal is still in the discussion stage and is not expected to be announced at the task force briefing later Friday, Fauci told CNN.

Coronavirus has killed more than 124,000 people in the United States, and confirmed cases are surging in a majority of the country.

So far, 32 states are reporting an increase in new coronavirus cases this week as compared to the prior week. Eleven of them report a 50% increase or greater. They include Montana, Idaho, Vermont, Nevada, Arizona, Texas, Florida, Georgia, Michigan, Missouri and Mississippi.

Miami began requiring masks in public at 5 p.m. Thursday, and Mayor Francis Suarez says DeSantis should do the same for the whole state.

“I would recommend it. I don’t see a downside,” Suarez told CNN on Friday, noting the state’s pandemic is “four times more intense than it was in March.”

Going without a mask in public in Miami could bring a fine of up to $500 for repeat offenders.

But the Florida governor said Friday he won’t be mandating the use of masks statewide and will “trust people to make good decisions.”

“I think that’s the better approach than to try to prosecute someone criminally for it,” DeSantis said.

At least 32 states, the District of Columbia and Puerto Rico require residents to wear a mask in public places, according to a CNN tally.

Arizona Gov. Doug Ducey said at a news conference Thursday, “It’s growing, and it’s growing fast across all age groups and demographics. Anyone can get this virus, and anyone can spread this virus.”

Arizona health officials reported new cases topping 3,000 as of last week, a pace that could soon overwhelm hospital intensive care facilities, the governor said. “We expect that our numbers will be worse next week and the week following,” Ducey said.

In California, Gov. Gavin Newsom declared a budget emergency to free up $16 billion to fight the pandemic. The state’s hospitals have seen a 32% increase in patients with coronavirus over the past two weeks, he said.

US Rep. Raul Ruiz, a California Democrat and a physician, says many counties reopened too quickly.

“At least in my county, Riverside County, indeed they opened the economy too early,” Ruiz said Friday. “The counties that you’re seeing with the rate of transmission and the higher rise are the counties that opened too early.”

At the beginning of the pandemic, health officials focused on the older population and those with underlying health conditions. That idea has changed in the last weeks.

The CDC has removed the specific age threshold, saying it’s not just those over age 65 who are at increased risk for severe illness.

More younger people testing positive is a “smoldering fire” that will hit vulnerable populations, said Erin Bromage, a CNN medical analyst and a biology professor at the University of Massachusetts Dartmouth.

Federal health officials expanded the list of who’s potentially most at risk of severe complications from Covid-19.

So are those with conditions such as sickle cell disease, poorly controlled HIV infection, bone marrow transplants or an organ transplant.