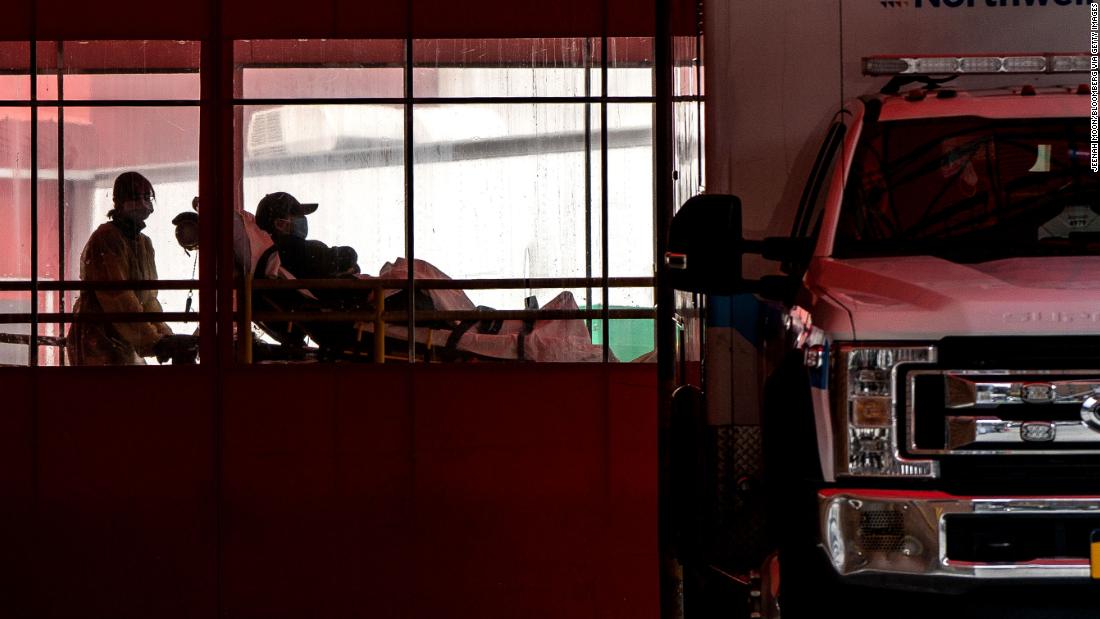 The daily death toll was 2,405 on Tuesday, according to Johns Hopkins University’s tally of cases, bringing the total number of US deaths to 26,033. At least 609,240 people have been infected with the virus in the US.

Despite the grim numbers, health officials have said they believe US numbers are leveling, but warn states shouldn’t yet ease up on social distancing measures because a resurgence of the virus is highly likely once Americans begin getting out of the house again.

What will be key to preventing another deadly wave in the country are the tools to track and monitor new cases.

“You want your resources to be able to very efficiently in real-time identify, isolate, and contact trace,” Dr. Anthony Fauci, director of the National Institute of Allergy and Infectious Diseases, said.

In the meantime, finding the right time to reopen the country is still a work in progress.

A team led by the US Centers for Disease Control and Prevention and the Federal Emergency Management Agency has drafted a strategy to return the country to work that includes guidance for local and state governments on how to reopen the country safely and in phases, the Washington Post reported. CNN has reached out to the government agencies for comment.

Meanwhile, governors across the country have also begun diving into discussions about the first steps toward reopening their economies, with many of the nation’s stay-at-home orders, as well as the federal government’s social distancing guidelines, set to expire at the end of the month.

But many state leaders who are still seeing their number of cases climb say it’s still too soon to begin thinking about lifting any measures.

How will states know when to reopen?

Nearly a dozen states have begun working together to determine what the first steps should be once stay-at-home orders are lifted. But with experts cautioning that each state should be treated as a separate situation and assessed individually, there are still few answers to the questions of when each part of the country will begin reopening and what that will look like.

All that some state leaders have offered so far are indicators of when their state may begin thinking about reopening.

California Gov. Gavin Newsom, who said he’ll be working with Washington and Oregon to determine a path forward, announced Tuesday a set of indicators that will help the state pin down the right time to begin lifting measures.

Those include the state’s ability to track and monitor infected individuals through testing, contact tracing and isolating procedures, as well as its ability to prevent infection of at-risk groups.

“Science, not politics must be the guide. It cannot be ideological,” he said. “We can’t get ahead of ourselves. … I don’t want to make a political decision. That puts people’s lives at risk.”

Massachusetts Gov. Charlier Baker told residents of his state he was expecting “difficult days and weeks ahead.” He said officials have begun conversations around reopening the state but there’s still a lot of work that needs to be done before a plan is set into motion.

The state will need to have testing, tracing, isolation and quarantine procedures in place to reopen, the governor said.

Baker, who will work together with other governors of the Northeast in a plan toward reopening said that while his priority is doing “what’s right for Massachusetts,” it will also help staying in sync with other state leaders.

“I think it’s going to be really important that we all pay attention to what the others are up to, and to make sure that nobody does anything that puts somebody in a really bad spot, because they just weren’t thinking about what that impact was going to be on some other part of the Northeastern part of the US,” he said.

in Ohio, Director of Health Dr. Amy Acton said that the state would first need to see a sustained decrease in the number of new cases — so low that officials could trace each infected resident — before considering reopening the state.

But even when that happens, until there’s a vaccine, daily life won’t look like it did before, the state’s governor said, and institutions will need to take precautions to prevent further infections.

“Until there is a vaccine — this monster is going to be working around us. When we start opening businesses and schools back up, it’s going to be different,” Ohio Gov. Mike DeWine said.

We might not go back to normal without a vaccine

DeWine’s assessment was underscored by researchers from the Harvard T.H. Chan School of Public Health who published findings Tuesday that projected the US may have to endure social distancing measures — such as stay-at-home orders and school closures — until 2022, unless a vaccine becomes available.

“Intermittent distancing may be required into 2022 unless critical care capacity is increased substantially or a treatment or vaccine becomes available,” they wrote in their report.

Those findings directly contradict research cited by the White House that suggests the pandemic could stop by this summer.

And much like experts have already warned, the Harvard team warned that another round of the virus is possible once social distancing measures are lifted.

“Even in the event of apparent elimination, SARS-CoV-2 surveillance should be maintained since a resurgence in contagion could be possible as late as 2024,” they wrote.