US government will decide where remdesivir goes amid coronavirus pandemic, drugmaker says 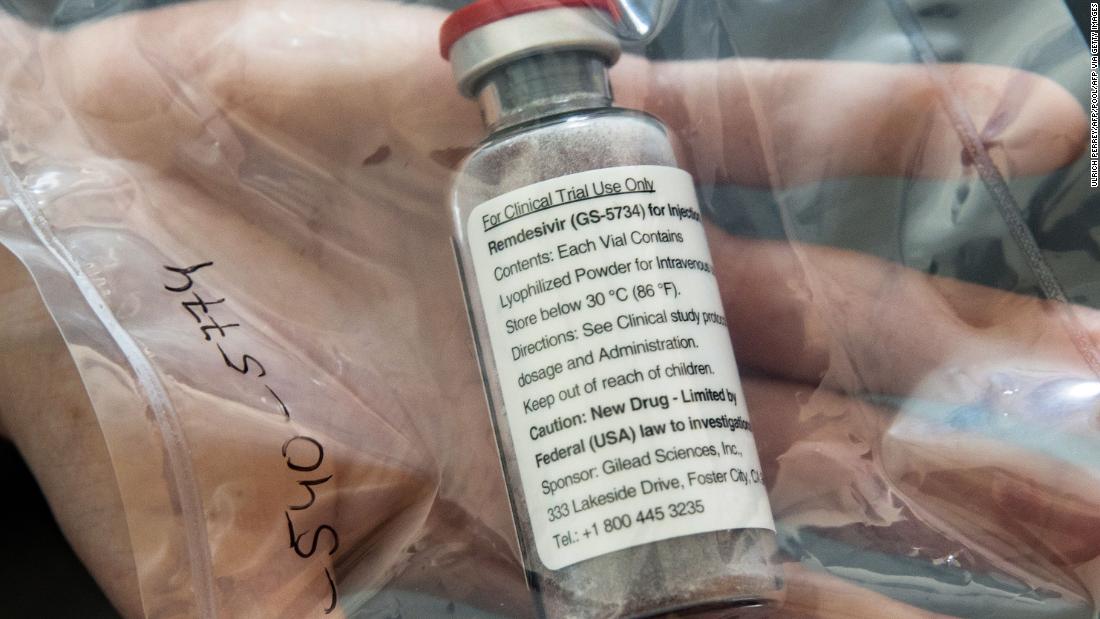 In early results from a trial sponsored by the National Institutes of Health, remdesivir was found to shorten the duration of illness in patients with severe Covid-19, but it had no statistically significant effect on whether patients died.

“We intend to get [remdesivir] to patients in the early part of this next week, beginning to work with the government, which will determine which cities are most vulnerable and where the patients are that need this medicine,” O’Day said on CBS’ “Face the Nation” this weekend.

CNN has reached out to the US Department of Health and Human Services for comment on how the drugs will be distributed.

Earlier this week, the US Food and Drug Administration authorized remdesivir for emergency use in patients with severe Covid-19, and Gilead previously announced it would donate its existing supply of the drug.

“What we will do is provide that donation to the US government, and they will determine, based upon things like ICU beds, where the course of the epidemic is in the United States. They will begin shipping tens of thousands of treatment courses out early this week and be adjusting that as the epidemic shifts and evolves in different parts, in different cities here in the United States,” O’Day said on Sunday.

His comments echo the FDA’s emergency use authorization for the drug, which says: “Distribution of the authorized remdesivir will be controlled by the United States (U.S.) Government for use consistent with the terms and conditions of this EUA.”

Gilead has donated 1.5 million vials of the drug, O’Day said, which amounts to between 100,000 and 200,000 treatment courses, depending on how long patients take it.

“This donation will be made available to patients here in America in the United States and across the world, as other regulatory decisions are taken for those countries,” he said.

Asked whether the Trump administration has discussed using the Defense Production Act to mandate prioritization of the US market over foreign markets, O’Day said: “I think we’re aligned with the US government to both serve the patients here in the United States and then to be able to also make sure, as a global company based here in the United States, that we can serve other countries around the world as well.”

CBS’s Margaret Brennan then asked for confirmation: “So they haven’t talked to you about mandating the US market be prioritized, or taking it for the stockpile, for example. You can still export it?”

“That’s correct,” O’Day said. “We have been exporting for clinical trials and for compassionate use, thousands of treatment courses. And our collaboration with the government has been such that we’ve been very transparent with them here in the United States, and we have a good relationship on future allocation.”

Asked for clarification on whether all 1.5 million vials would be donated to the US government, as O’Day suggested, Gilead spokesperson Sonia Choi said: “We intend to allocate our available supply based on guiding principles that aim to maximize access for appropriate patients in urgent need of treatment.”

She said the company is “working with regulatory authorities worldwide and bioethicists to help inform our global allocation approach.”

In a press release on Friday, Gilead said its goal is to produce at least 500,000 treatment courses by October and more than a million by December.

The FDA-authorized drug is infused through an IV, and its use is limited to hospitalized patients with severe disease. But O’Day said Gilead is looking at other formulations of remdesivir too — including an inhaled version that could be given outside of the hospital.