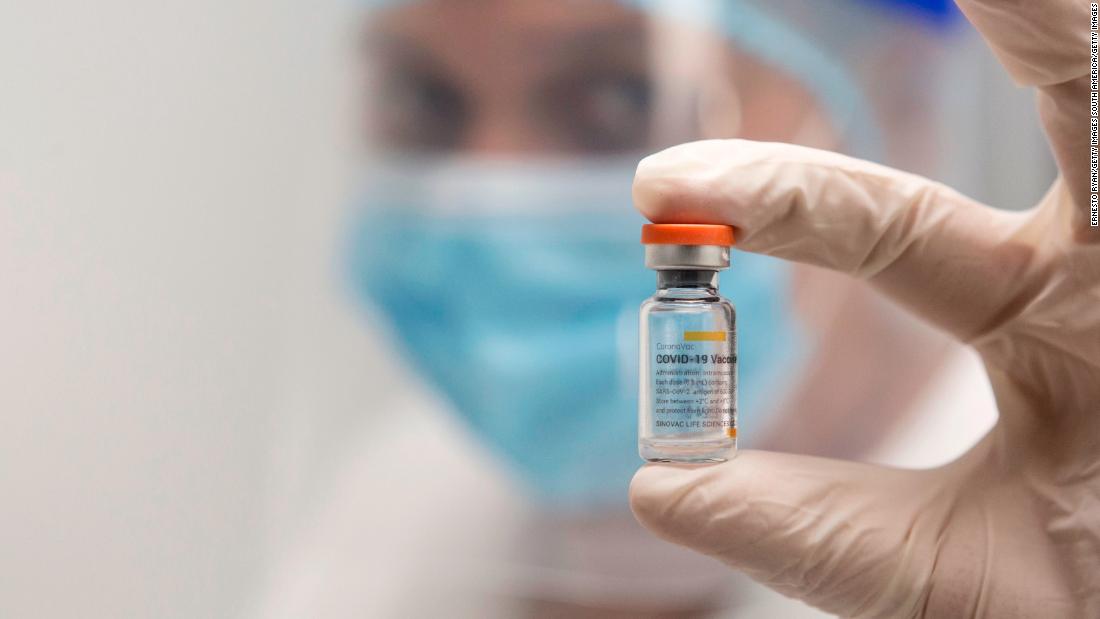 “These milestones are significant accomplishments, but we have much more to do,” Biden said Thursday. “That’s just the floor. We will not stop until we beat this pandemic.”

The country still has a long way to go, but the vaccine rollout is looking a lot less chaotic.

As of Thursday, about 12.3% of people are fully vaccinated in the US. That’s a long way from herd immunity, where enough people have been vaccinated or had the disease to have immunity, if herd immunity is even achievable.

“I think we should be careful about wedding ourselves to this concept of herd immunity because we really do not know precisely, for this particular virus, what that is,” Dr. Anthony Fauci, director of the National Institute of Allergy and Infectious Diseases, told a Senate hearing Thursday.

“We should just be concerned about getting as many people vaccinated as quickly as we possibly can,” Fauci said Monday.

In January, before Biden came into office, even Surgeon General Dr. Jerome Adams called his own administration’s vaccine rollout “a little bit messy.” Experts say it is definitely not that any more, but the process still needs work.

“It’s better in a lot of ways, but maybe we should call it ‘less messy,'” said Jennifer Kates, the senior vice president and director of global health and HIV policy at the Kaiser Family Foundation.

One improvement has been in vaccine supply, Kates said.

In December and early January it wasn’t clear if the country would have enough doses for everyone.

“The Biden administration has taken a much more, I’d say, aggressive approach to also addressing the challenge of vaccine distribution, by purchasing more doses, basically ensuring that the US now has the supply it needs,” Kates said.

States can also better predict how much supply they’ll get. There are new federal mass vaccination sites, a federal retail pharmacy partnership, and a partnership with community health centers — all changes from the Trump administration’s approach that left distribution largely to states to sort out.

“They’ve played a much more direct and active role in the actual vaccine distribution and getting shots in arms in the process, so that’s a big shift,” Kates said.

There are also now three authorized vaccines. The latest, made by Johnson & Johnson’s Janssen vaccine arm, requires only a single dose, so that means more people can become fully vaccinated sooner. There’s been a limited supply so far, but the company said it will meet its contract obligation to have 100 million doses by the end of May with more on the way with another manufacturing plant about to come into the mix.

Lori Freeman, CEO of the National Association of City and County Health Officials (NACCHO), said supply to the states is expected to hold steady until the end of March with a larger ramp-up in April.

“It’ll be interesting to see with that such significant increase in vaccine supply. I worry a little bit about if we have the systems in place to handle the additional quantity,” said Freeman.

Freeman says there is not enough workforce to manage this right now, but if public health agencies work with enough partners it’s possible and plans are under way.

Coordination among the federal, state, and local leaders is the next hurdle that needs to be overcome quickly.

“Without that coordination, if you’re just simply pushing out vaccine in every possible channel, we’re not really going to understand how we’re penetrating certain communities and vaccinating the country,” Freeman said.

She said they’re working to figure out the distribution points that will make the biggest differences quickly, because there are still gaps, such as elderly who are homebound.

“There are a lot of people to think about still,” Freeman said. “It’s like the world’s biggest Rubik’s Cube puzzle.”

Getting it to the right people

Equity has been a problem. Last week, the Biden administration announced a $250 million investment to help vaccination efforts to reach communities that have been disproportionately impacted by the pandemic.
In the first two and a half months of the US vaccination program, communities that were richer and whiter had much greater access to vaccines in the majority of states, according to a report released Wednesday by the US Centers for Disease Control and Prevention.

“The most impacted people are not getting most of the vaccines,” said Dr. Carlos Del Rio, an infectious disease expert at Emory University School of Medicine.

To be effective, the country’s vaccination efforts are also going to have to convince the hesitant to get the vaccine.

The effort will involve “trusted messengers, influencers, and others to get to everyone,” she told CBS Face the Nation Sunday.

Republicans will need to be reached.

A CNN poll from March 11 found that while 92% of Democrats say they have gotten a vaccine or say they will try to get one, that falls to 50% among Republicans.

Freeman says public health agencies are thinking through how to reach the hesitant. She said this also has to come from the neighborhood level.

“We need to pivot quickly to get the right trusted messengers in every neighborhood to peer to peer help people turn the corner on this,” Freeman said.

‘Eligible’ does not mean vaccinated

Last Thursday, the White House said that all Americans adults will be eligible for vaccinations by May 1 and the country would be on a path to get “closer to normal” by July 4th.

“He said every American would be ‘eligible’ and I thought what does that really mean? What that means is that when you, or I, or any of our friends and loved ones, when we’re looking at registering for the vaccine, what is means is that we will all be eligible to put ourselves on a waitlist,” said Freeman.

With still more demand than supply, leaders need to be transparent and tell people it’s still a little hard to project when they will actually get a vaccine.

While all American adults will be eligible for vaccinations by May 1, the White House has there won’t be enough supply to meet the administration’s goal of having enough vaccine for all 300 million US adults until the end of May.

Del Rio said while the vaccination efforts right now are not perfect, he has been “quite surprised” that the US is as far along as it is. He sees hope in this.

“The US does not have an adult vaccination program. We’ve never vaccinated like this. It’s totally new, and the states were trying to do this with no resources and having to make it up as they go,” Del Rio said.

If you think about it, he said, about a fourth of the world’s doses have been given in the US.

“Could it be better, sure, but the US and the states are doing far better than we expected.” And perhaps that’s a good sign for what is to come.