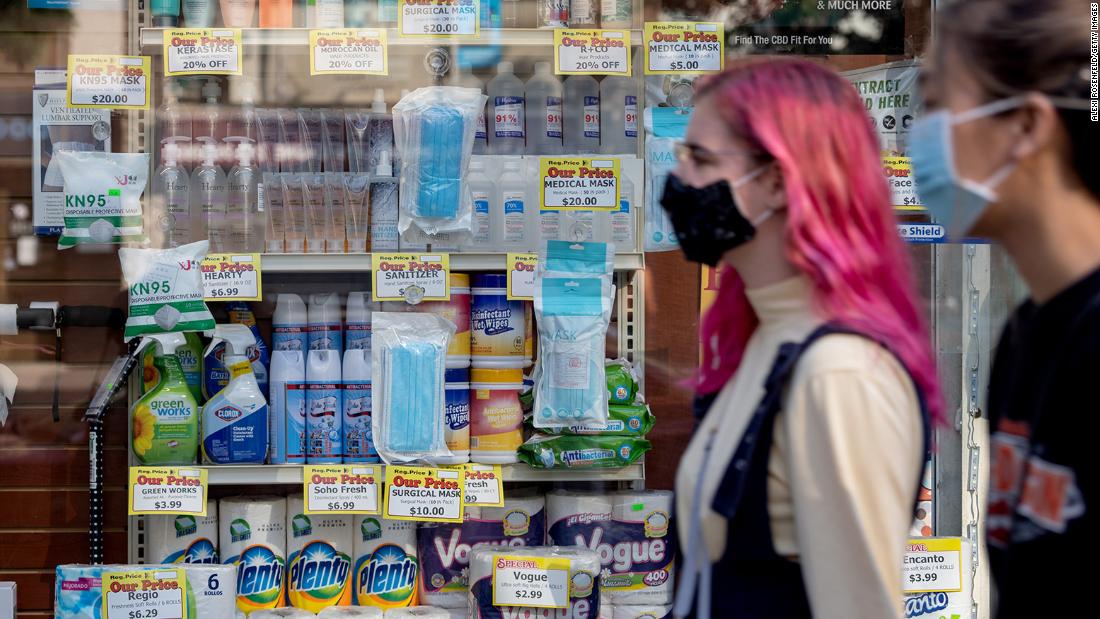 “We are in such a divisive state in society that it tends to get politicized,” the country’s leading infectious disease expert said Monday night on “The Daily Show with Trevor Noah.”

“It’s almost the one side versus the other,” Fauci said.

The US is now months-deep into navigating the Covid-19 pandemic and several safety measures remain points of contention — including face masks. While many across the country have embraced experts’ recommendations to wear face coverings to protect against the virus’ spread, others have protested their use.

“People take sides, like wearing a mask or not is a political statement and that’s really unfortunate, totally unfortunate because this is a purely public health issue. It should not be one against the other,” Fauci said.

But even Americans who want to follow guidance from experts about Covid-19 ran into a muddied message this week. The US Centers for Disease Control and Prevention updated its guidance to say Covid-19 can spread through the air but days later abruptly reverted back to guidance posted months ago — saying the virus is thought to spread mainly between people in close contact and “through respiratory droplets produced when an infected person coughs, sneezes or talks.”
Several studies have shown the virus can spread through small particles in the air.

“It’s extremely confusing,” Dr. Leana Wen, a CNN medical analyst and emergency physician at George Washington University, told CNN. “And that type of whiplash — especially without an explanation directly from the CDC — creates confusion and unfortunately leads to lack of trust in the CDC overall.”

That confusion comes at a time many states’ Covid-19 trends are heading in the wrong direction and as the US inches closer toward 200,000 lives lost to the virus.

How confusion could contribute to spike

With fall rolling in, the US is heading into what CDC Director Dr. Robert Redfield predicted could be one of the “most difficult times” in American public health. One expert told CNN this week the next months may make for an “apocalyptic fall.”

“It’s happening because we’re forcing schools to reopen in areas of high transmission,” said Dr. Peter Hotez, dean of the National School of Tropical Medicine at Baylor College of Medicine. “We’re forcing colleges to reopen, and we don’t have the leadership nationally, telling people to wear masks and to social distance and do all the things we need to do.”

The US could see another surge of cases and that surge could come on top of flu season, which health officials have warned could complicate things — greatly. At least 24 states are now reporting an uptick in new cases compared to the previous week, according to data from Johns Hopkins University — many of them across America’s heartland and Midwest.

Dr. Jeanne Marrazzo, an infectious diseases expert at the University of Alabama at Birmingham, says there are several factors that could be contributing to the rise in numbers — including the public’s fatigue of pandemic-like conditions.

“And then the second thing is … the completely contradictory messages that we’re getting — not just the misinformation, but also the confusion about how things are spread.”

So far, more than 6.8 million Americans have been infected since the start of the pandemic and at least 199,817 have died, according to Johns Hopkins University.

More than 4,000 students and school staff infected in Texas

A rise in cases also comes after many students across the country returned to class — both in schools and colleges.

Colleges and universities across all 50 states have reported infections — prompting local leaders to set new measures in place in hopes of controlling the spread of the virus on college campuses and in college towns.

Infections have increased among younger students as well — and those around them.

In Texas, there have been more than 4,500 positive cases of Covid-19 among students and staff in the state’s public schools since the new academic year kicked off, according to data from the Texas Education Agency.

More than 2,300 of those cases are students.

In Florida, the number of children under 18 who have contracted the virus has jumped 26% since many of the state’s public schools opened.
Experts are still studying the role children play in the transmission of the virus but several studies have shown they can spread it too — often, just as much as adults.
And a report recently released by the CDC suggests that not only can children spread the virus but they can do so even when they show mild symptoms or none at all.