US coronavirus: Sweeping restrictions take effect as health officials warn US is at a tipping point 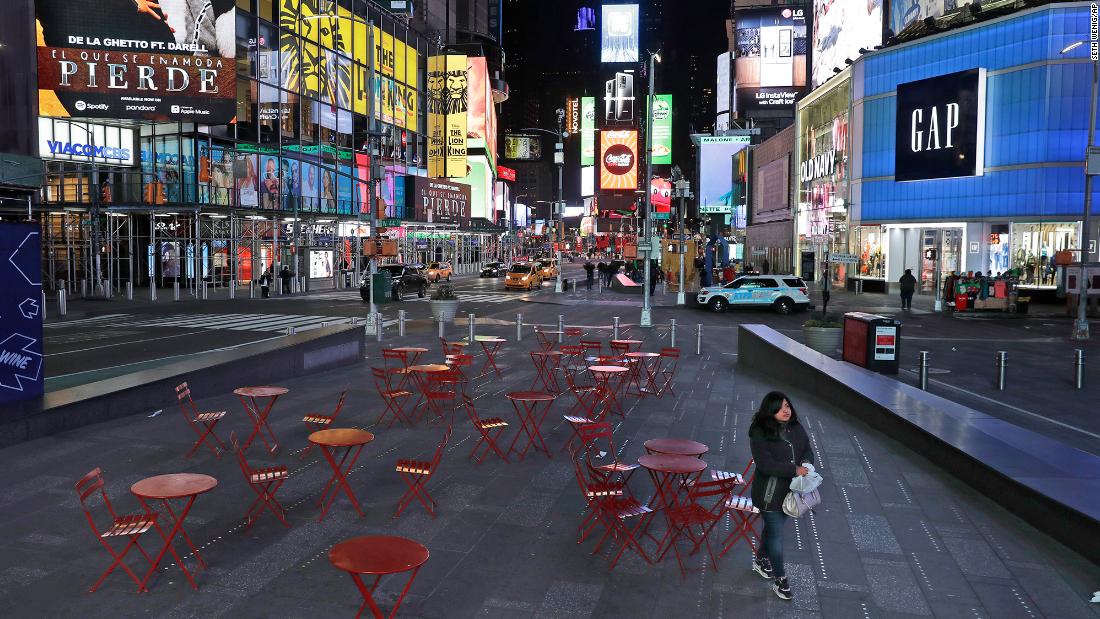 “We have the same number of cases that Italy had two weeks ago. We have a choice to make,” US Surgeon General Dr. Jerome Adams said. “Do we want to really lean into social distancing and mitigation strategies and flatten the curve or do we just want to keep going on with business as usual and end up being Italy?”

This week has already brought a sharp increase in both US cases and deaths.

On Sunday evening, there were 3,349 cases of coronavirus in the US. That number jumped by more than 1,000 in about 24 hours. The number of deaths climbed by more than 20 in that time frame.

Throughout the day on Monday, orders for an altered American reality poured in as cases across the US reached 4,466 and 87 people had died.

The mayor of New York City said he will limit all bars, restaurants and cafes to take out or delivery services.

Public health officials in Colorado ordered restaurants, bars, gyms, theaters and casinos to close their doors for 30 days. Facilities will still be allowed to sell food and beverages through options like drive-through and delivery services.

“Based on the experience of other countries, the state of Washington, and modeling data, the sooner we begin social distancing measures on a large enough scale, the more quickly we can slow transmission of the virus,” Colorado Department of Public Health and Environment Executive Director Jill Hunsaker Ryan said.

Similar orders were issued in states including Maryland, Kentucky, Louisiana and Indiana.

Meanwhile, states such as New York, New Jersey, Connecticut, Michigan and Wisconsin put a ban this week on gatherings of 50 people or more.

In San Francisco, Mayor London Breed issued “shelter in place” guidance, requiring the city’s residents to stay inside and leave only for essential needs — things like grocery shopping, and going to the police, bank, gas stations and pharmacies.

“We know these measures will significantly disrupt people’s day to day lives, but they are absolutely necessary,” the mayor said in a Monday statement. “This is going to be a defining moment for our city and we all have a responsibility to do our part to protect our neighbors and slow the spread of this virus by staying at home unless it is absolutely essential to go outside.”

‘No more than 10 people,’ government says

The orders came the same day the federal government released a new set of guidelines for the next 15 days to fight the spread of the virus. One part of those guidelines: steering clear of groups with more than 10 people.

As President Donald Trump announced the recommendations from the White House, the Dow saw its worst point drop in history. Trump said the country “may” be headed toward a recession but said he was instead focused on fighting off the coronavirus.

The guidelines also urged Americans to avoid eating and drinking at bars and restaurants and to instead opt for drive-through, pickup or delivery options.

“We’d much rather be ahead of the curve than behind it, and that’s what we are,” Trump said Monday evening.

The guidelines came largely after governors across the country signed new orders and directives in response to the virus — and called on the federal government to step up its efforts.

Maryland Gov. Larry Hogan told CNN Monday that while state senators are on the “front lines” of the response to the virus, a clear set of guidelines from the federal government would be helpful.

“We’re all taking actions that we believe are necessary in our state,” he said.

‘We are woefully short’ on medical equipment

Shortly after New York, New Jersey and Connecticut announced bans on mass public gatherings, the governors of the three states said in a conference call they were also worried about shortages of medical equipment.

“We need hospital beds over the next couple of weeks,” New Jersey Gov. Phil Murphy said. “We are woefully short as a region, as a country, in terms of being able to take care of folks — especially if this surge comes in the way we expect it.”

“We are badly outgunned in that front and that’s where we do need the (federal government) to help step up,” he said.

One Georgia hospital ripped through months’ worth of supplies while tending to coronavirus patients, its president told CNN.

But Department of Health and Human Services officials said in a call with medical professionals Monday there isn’t enough stockpiled medical equipment like masks, gowns and gloves in the national stockpile to fill in the gaps that states and local communities may see, a source on the call told CNN.

HHS officials said the government didn’t yet have a solution for possible shortfalls but was working on one.

“We have been transparent that more supplies are needed — hence the request to Congress for additional funding so we could procure more and scale up production,” an HHS spokesperson said in a statement to CNN. “The role at the Federal level is to appropriately implement regulatory relief, provide alternative sources and support manufacturing, and adjust allocation to appropriately target areas in need.”

How long will it last?

In the government news conference Monday, Trump said the country’s new normal may last until July or August.

Guidance from health officials gives some insight on how long the outbreaks may substantially affect the country.

The US Centers for Disease Control and Prevention Sunday recommended no gatherings with 50 people or more take place for the next eight weeks.

The CDC also said last week closing schools for eight weeks or more may have a great impact on curbing spread of the virus, compared to two and four-week closures.

Meanwhile, a novel coronavirus vaccine trial in the US gave a dose to its first participant, the National Institute of Allergy and Infectious Diseases said Monday.

The study aims to enroll a total of 45 healthy adults over a six-week time frame. Each participant will receive two injections about a month apart in varying doses.