US coronavirus: Surge in cases has left labs overwhelmed and Covid-19 tests delayed 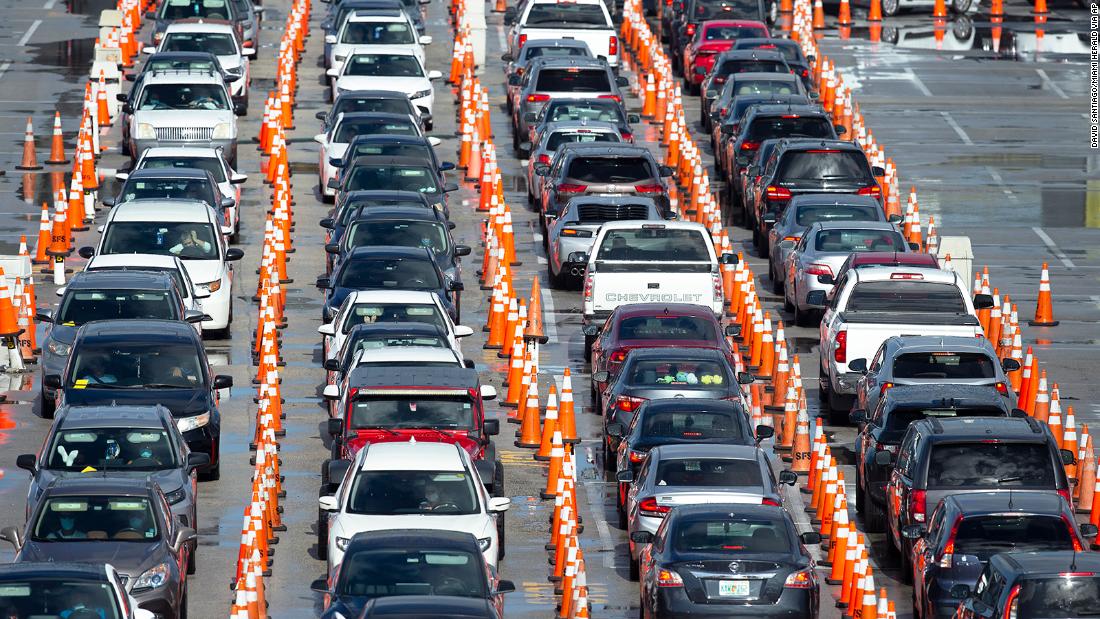 Labs across the country are now facing what seems like an almost “infinite” demand, one expert says.

Diagnostic labs are feeling the effects of the spike in cases, with a leading commercial lab saying testing results can now take up to two weeks — up from its previous one-week estimate just days ago.

Demand is even higher in the South, Southwest and West regions of the US, Quest said.

And the pandemic is still in its early stages, said Michael Osterholm, director of the Center for Infectious Disease Research and Policy at the University of Minnesota.

To help combat the spread of the virus, at least three mayors have mentioned reverting back to tighter measures, and nearly 40 states have some type of mask requirement in place. Masks, experts have said, are one of the most powerful tools to prevent further infections.

“It’s all about distancing. And that’s what actually drove down the numbers last spring,” he said.

“We really did create a lot of distancing and until we do that, we’re going to have an impossible time driving this virus down to a level which then we can test and trace on a routine bases like other countries and open up our economy again safely.”

“To care for the patients that are already with the virus, we need more personnel, and personnel meaning doctors, nurses, technicians, respiratory technicians,” the judge told MSNBC’s Rachel Maddow. “Oxygen, of course, it is a big shortage right now. It is extremely important for us to have the necessary supplies.”

The state’s governor, which previously pushed for one of the most aggressive reopenings, has more recently emphasized the importance of masks. He issued a mandate on face coverings earlier this month but has said there will not be another lockdown.

White House coronavirus response coordinator Dr. Deborah Birx said Monday the right precautions all in place could be nearly as powerful as another lockdown.

“What would happen if (there was) 100% mask use in public areas, closing bars, limiting indoor gatherings and decreasing dining capacity,” she said. “When we modeled it, it came very close to the impacts of sheltering in place.”

At least 27 states have now halted or rolled back reopening measures in response to cases.

The governor’s office said Monday hair salons and barbershops in 33 counties could reopen outside. That’s as Los Angeles County broke its record for daily hospitalizations for the fourth time in a week, said Dr. Barbara Ferrer, the county’s public health director. There are now 2,232 patients hospitalized, about 26% of whom are in the ICU, Ferrer said.

In Kentucky, where the governor Sunday announced the state’s highest single-day total, officials reduced the number of people allowed at social gatherings from 50 back down to 10.

“I’m here to tell you now, that Sunday was a rude wake up call. Sunday is a warning, it’s a shot across the bow. If we don’t intervene, then we’re going to see the fate here in Kentucky that they’re seeing in some of these other states,” Dr. Steven Stack, the health department commissioner said Monday.

Missouri governor says children are ‘going to get over it’

States are now deciding what will happen next month, when students are slated to return to class. Many districts throughout the country have already announced they are beginning the year with online instruction.

Teachers have pleaded that while children may not have seemed to show as serious of complications as adults, they could contribute to further transmission of the virus when returning home. But President Donald Trump has said he’s pressuring governors to reopen classrooms.

In Missouri, Gov. Mike Parson said Monday the state has to move forward with sending children back, saying the students are the “least likely to have a problem” if they contract the coronavirus.

But new research from South Korea reveals older children — between the ages of 10 and 19 — can transmit the virus just as much as adults can.
While the US Centers for Disease Control and Prevention is still studying the role children play in transmission, the agency recommends children socially distance at six feet apart from people they don’t live with and anyone 2 years and older wear masks in public when socially distancing is difficult.

Evidence showed the vaccines can produce immune responses that would be expected to protect people against infection and all appeared to be safe.

The results were promising, researchers say, but large-scale trials are needed to determine whether the vaccine protects against the virus.

“The responses measured in the blood and the absence of serious harms indicate there is a possibility of an effective vaccine against Covid-19,” Stephen Evans, a professor of pharmacoepidemiology at the London School of Hygiene and Tropical Medicine, told the Science Media Center in the UK about the Oxford trial.

“It does not yet show that the disease is reduced or prevented, and this will not be easy to show until Phase 3 trials have been completed in settings where the SARS Cov-2 virus is circulating at a high rate and people are getting clinical and severe disease.”

But even if a vaccine were available today, nearly half of Americans wouldn’t get it due to a lack of trust, former US Surgeon General Dr. Vivek Murthy told CNN Monday.

“We know that distributing vaccines is going to be hard enough. And if people aren’t willing to take it because we haven’t built enough public trust, that’s going to seriously impair our ability to build herd immunity,” Murthy said.

The estimate comes from surveys which have already been conducted, Murthy said, adding he finds it a “shocking number and deeply concerning.”