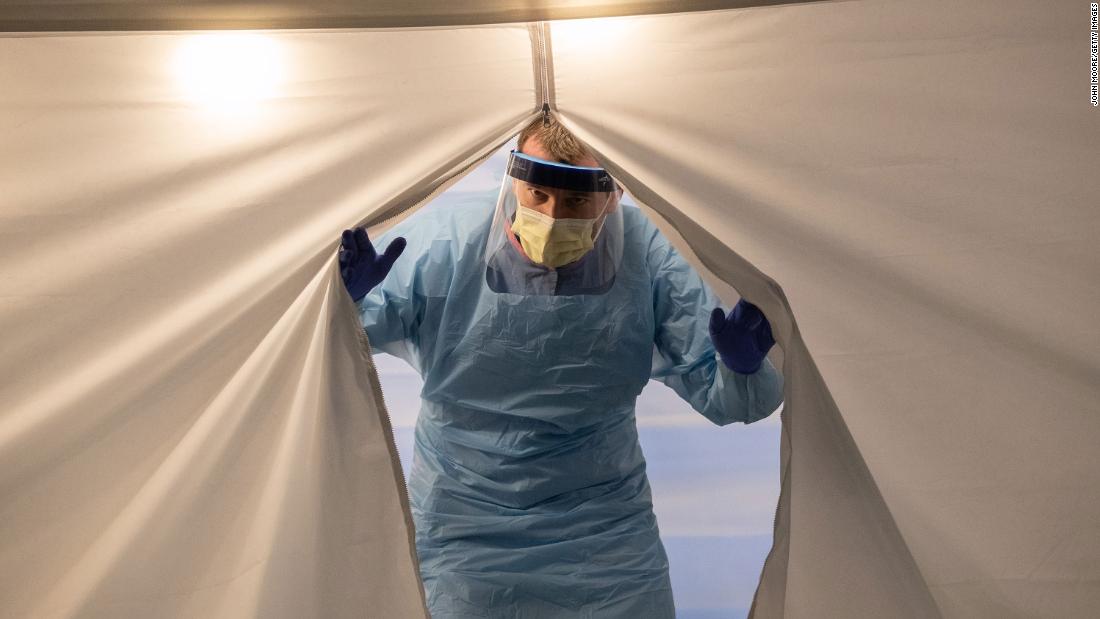 Police in Miami, Florida — what experts call the country’s coronavirus epicenter — issued more than 300 citations in 10 days to individuals and businesses that aren’t abiding by the local mask order.

“The growth rate (of cases) has shown flattening since we implemented the masks in public rule and we’re following the advice of our health care professionals and our hospital administrators who are telling us that what we have to do now is focus on enforcement,” Miami Mayor Francis Suarez told CNN Sunday. “We created a special task force just for that and we’ve been issuing hundreds of tickets over the course of the week.”

The county has reported more than 100,000 coronavirus cases — more cases than all but 12 states. Over the weekend, ICUs were at 137% capacity and there were about 334 patients on ventilators, about a 64% increase in two weeks, according to county data.

While Florida’s governor hasn’t ordered a statewide mandate, Miami-Dade County announced earlier this month it was tightening restrictions around its order on face coverings by punishing violators with a $100 fine. About 150 citations have gone to businesses and 174 citations to individuals, said Miami-Dade Police Department Detective Alvaro Zabaleta.
In Indiana, where a statewide mask order went into effect Monday morning, sheriffs in at least four counties said they wouldn’t enforce the mandate, according to CNN affiliate WXIN.

“If a disturbance or other issue were to develop, deputies would respond as always; however, we will not respond solely for allegations of a violation of the executive order,” said Johnson County Sheriff Duane Burgess, according to the affiliate.

In Ohio, where the governor issued a statewide mask order last week, one sheriff already said earlier this month he wouldn’t be enforcing any sort of mandate, according to CNN affiliate WLWT.

“I can tell you this — I am not the mask police. I am not going to enforce any mask-wearing. That is not my responsibility. That is not my job. People should be able to make those choices themselves,” said Butler County Sheriff Richard Jones.

And even major retailers, like Walmart, who made headlines last week for new mask requirements for their customers, now says it won’t prohibit anyone who refuses to wear a face covering from shopping in their stores.

But public health experts have highlighted that if Americans wore face masks and practiced consistent social distancing the effects could be drastic: Cases could begin to slow in a matter of weeks and the impact of both precautions could be nearly as effective as another round of lockdowns.

With a continuing upward trend, California is leading the country with the highest number of total infections — more than 452,280 — followed by Florida, New York and Texas.

At least 36 counties are on California’s watch list and have been ordered to close many of their indoor operations. More than 8,100 deaths across the state have so far been linked to the virus and at least 6,912 people are hospitalized with 1,993 people in ICUs. Health officials said that the state’s positivity rate, a key indicator in how fast the virus is spreading within a community, is on the rise.

That positivity rate — the number of people testing positive compared to how many are getting tested — is at about 7.5%, according to state data. For comparison, New York has brought its rate down to about 1%, a statistic the governor touted as “really great, great news.” Miami-Dade County’s positivity rate is at about 18%, according to county data.

In Texas, the death toll surpassed 5,000 Sunday, after the state reported 153 fatalities in a day. Across the state, at least 10,075 people are in hospitals.

In Louisiana, which has reported more than 107,500 infections, health officials said Sunday about 94% of the 3,840 new cases reported Sunday were tied to community spread, rather than places were residents congregated together.
The US currently has 4.2 million coronavirus cases, a fourth of the global total of 16.2 million, according to Johns Hopkins University. There have been more than 146,000 deaths in the US. Globally, the death toll is more than 648,000.

Communities will have to decide school openings

With just several days left in July, educators across the country are working to determine what happens when it’s time for students to return to class.

Guidelines released from the US Centers for Disease Control and Prevention last week came down hard in favor of reopening schools, saying children don’t suffer much from the virus and are less likely to spread it than adults. The guidelines recommend local officials keep schools closed if there is substantial, uncontrolled transmission of the virus in an area.

There won’t be a uniform threshold for when schools should reopen, Health and Human Service Secretary Alex Azar told CBS’s “Face the Nation” Sunday.

“Each community is going to have to make the determination about the circumstances for reopening, and what steps they take for reopening,” Azar said. “But the presumption should be that we get out kids back to school and figure out how to make that happen.”

Echoing that claim Sunday, Adm. Brett Giroir, a member of the White House’s Coronavirus task force told CNN that while the presumption is that children need to be in school, some communities may have to tamper with their reopening strategies if virus transmission is too high.

“There is no one size that fits all,” he said.

While the Trump administration has remained steady in its message in recent weeks that it wants schools to reopen, educators have protested a return to school next month, arguing that even if children don’t experience the virus in the same ways, the decision to return could be deadly for teachers and staff.

While much of the world has pinned its hopes on a vaccine to help combat the virus, at least one vaccine trial in the US is moving to the third phase of testing this week.

The vaccine is being developed at the National Institute of Allergy and Infectious Diseases in partnership with the biotechnology company Moderna. Phase 3 of the trial is expected to involve 30,000 volunteers and will test whether the vaccine protects people against the coronavirus.

Early results from the Phase 1 study showed that the vaccine, given at three different doses, triggered an immune response in the people who received it (the higher the dose, the higher the immune response). More than half of the participants experienced side effects including fatigue, chills, headache, muscle pain and pain at the injection site.

“There are no secrets here, it’s very important that we maintain, gain, increase trust in this whole process or people are going to be confused, concerned and they’re not going to take the vaccine,” he said on Sunday.

His comment comes about a week after former US Surgeon General Dr. Vivek Murthy said that about half of Americans would likely not get the coronavirus vaccine if it was available because of a lack of trust.