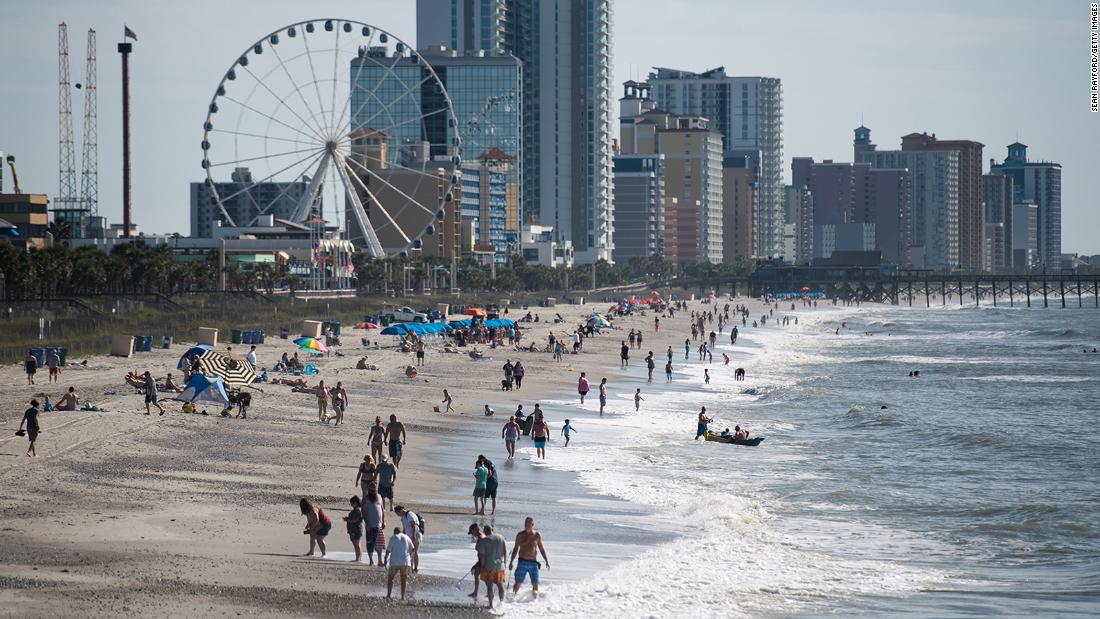 If you really have to go, wear a mask, wash your hands and maintain social distancing. And if you must host, keep the information of all attendees for future contact tracing.

Coronavirus cases are rising in 36 states heading into the weekend — with California, Arizona, Texas and Florida all posting a record number of new infections this week.

The number of new cases surpassed 50,000 nationwide for the third straight day Friday. The virus has killed more than 129,000 people and infected over 2.7 million in the US since the pandemic started, according to Johns Hopkins University.

After months of coronavirus restrictions, people restless to get back to normal are planning barbecues, dips in lakes and gatherings to watch fireworks.

But some are finding beaches in Miami and Los Angeles closed, tubing in Texas rivers banned and some city celebrations happening mostly on live streams. With states such as Arizona banning public events larger than 50 people, some officials are canceling annual fireworks altogether.

Without the right measures to stop the spread of the virus, health experts fear the holiday weekend could bring a wave of new infections that could overwhelm hospitals. To avoid a public health disaster, they’re imploring people to wear masks, skip bars and crowded places, and avoid mixing with people outside of their households.

“What we know is that our behavior is the most powerful tool we have right now against the virus,” said Dr. Nadine Burke Harris, surgeon general of California. “And we really need folks to, you know, step up. I know that folks are tired, but it’s absolutely critically important.”

In Georgia, where coronavirus cases have surged in the past week compared to the one prior, health care workers made a passionate plea.

Over 1,400 of them signed a letter addressed to Gov. Brian Kemp asking for him to increase state restrictions to help slow the spread of the coronavirus.

The letter dated Thursday urged the governor to close bars and nightclubs and prohibit indoor gatherings of more than 25 people, including at places of worship. It also recommends a statewide face covering requirement that allows mayors and county officials to institute requirements appropriate for their jurisdictions.

“During the past week we have seen a sharp spike in cases that cannot be accounted for by increased testing. We also are seeing a very troubling increase in hospitalizations that, if continuing, will overwhelm our healthcare infrastructure, not only in metro Atlanta but also in rural Georgia,” the letter said.

Dr. Jesse Couk, the chair of Infectious Disease Shepherd Center and a doctor at Piedmont Atlanta Hospital, told CNN he worked with other doctors and health care professionals to create the letter after he became frustrated with lack of action in response to the spike in cases.

Couk and other medical contacts worked together to create the letter and have other health care professionals sign it. He wanted to highlight the need for increased social distancing and further restrictions to slow the spread. He said he was speaking as a member of the Infectious Disease Society of Georgia and not as a representative of Piedmont Atlanta.

With mask mandates for Texas and Kansas going into effect Friday, 19 states and Washington, DC, now have such requirements.

“We have the ability to keep businesses open and move our economy forward so that Texans can continue to earn a paycheck, but it requires each of us to do our part … and that means wearing a face covering in public spaces,” Texas Gov. Greg Abbott said.

Other governors have also issued statewide orders, including California, Connecticut, Delaware, Hawaii, Illinois and Michigan. And in Tennessee, Gov. Bill Lee signed an executive order granting mayors in 89 counties the authority to issue mask requirements. It allows local governments to issue the mandates if a surge requires more preventative measures being taken to slow the spread of the virus.

“While our densely populated urban areas continue to have the highest COVID-19 case rates, our local governments expressed a need for greater flexibility in addressing a rise in cases and that includes setting stronger expectations around masks,” Lee said in a statement. “This targeted approach ensures we protect both lives and livelihoods and safely keep our economy open in Tennessee.”

In Myrtle Beach, South Carolina, the beaches will be open to thousands of visitors for the holiday weekend — but with a mask requirement to help stop the spread, Mayor Brenda Bethune said.

Of the 36 states whose new cases have gone up this week compared to the previous one, nine of them have increased by over 50%. They are Montana, Idaho, Nevada, Florida, Georgia, Tennessee, Louisiana, Alaska and Delaware.

CNN’s Steve Almasy and Nicole Chavez contributed to this report.