US Coronavirus: New challenges in battle against Covid-19 come with the approaching fall season 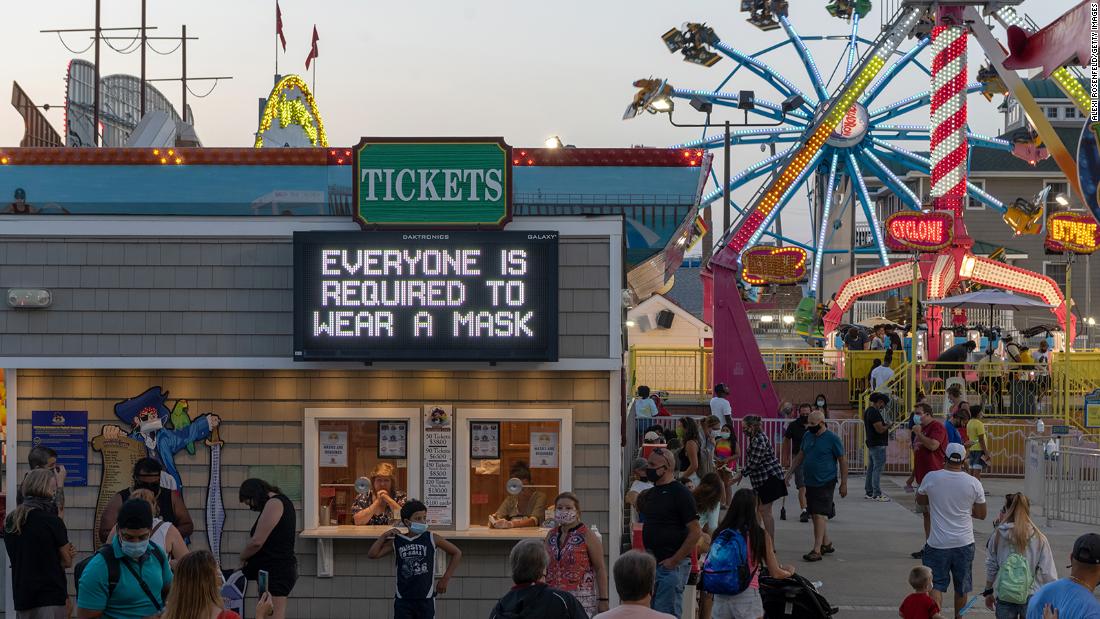 “I don’t think it will take much to really bring us back to 70,000 cases a day,” said Dr. Peter Hotez, dean of the National School of Tropical Medicine at Baylor College of Medicine.

In efforts to avoid another surge of cases and hospitalizations similar to the ones that came after large Memorial Day and July 4 celebrations, many opted to ditch the crowds over the long weekend. Others weren’t as cautious.

In San Francisco, more than 1,000 people gathered at an event celebrating Burning Man culture, the mayor said. In Brooklyn, authorities shut down a bar over the weekend after deputies found nearly 300 people packed inside, CNN affiliate WABC reported. In Nashville, thousands flocked to the bars operating with restrictions, prompting the mayor to close down portions of a road to allow for more social distancing, CNN affiliate WKRN reported.
In Rehoboth Beach, Delaware, the crowds of visitors made social distancing nearly impossible, one visitor told CNN affiliate WBOC.

“In general I thought crowds were down this summer, until we hit Labor Day weekend,” Kristin Lefebver told the station. “As far as walking along the avenue, walking along the beach, being in the ocean, we’re quite on top of each other this weekend.”

The holiday crowds mark the unofficial end to a devastating summer across the country, with Covid-19 infections surging to more than 6.3 million and deaths topping 189,000. Experts have offered a grim prediction on what the fall and winter could look like, with the pandemic stacking up against flu season and new fronts opening up, including schools and college campuses.

“We’re heading into the fall and the winter, when we would expect a respiratory pathogen like a coronavirus to start spreading more aggressively than it would in the summer time.”

The new challenges ahead

For the Americans who have grown exhausted of the altered reality and lingering restrictions to protect against Covid-19, staying vigilant seems like a tall task. With cooler weather ahead, it’s likely many of the gatherings that have already been taking place — many against experts’ advice — will now move indoors, where health officials have said the virus can spread more easily.

And months into the pandemic, safety measures like face masks remain a point of contention nationwide — despite experts’ projections that more mask-wearing could mean thousands of lives saved by the end of the year.
“When you look at countries where the mortality is a fraction of what it is in the United States, the common theme from the very beginning of the pandemic was universal masking,” Dr. Jonathan Reiner, CNN medical analyst and professor of medicine at George Washington University, said.

Ahead of a vaccine, masks remain the most powerful tool against the virus, doctors have said, and one that’s been employed by colleges nationwide to curb transmission. But with tens of thousands of students back on campus, institutions are facing massive challenges.

Read: Is it safe to go to college?
Covid-19 cases in colleges have been linked back to activities including to athletics, off-campus gatherings and Greek life. Some universities changed their plans and moved to remote instruction to prevent outbreaks while others placed students into quarantine after positive cases. Other universities have sent students who violated safety protocols home.
That’s all as doctors are gearing up to fight both the flu and Covid-19 at the same time.

Expert: Vaccine available for widespread US use ‘unlikely’

Despite the President’s hopeful message that an effective vaccine could be available by Election Day, Gottlieb said the likelihood that there will be a vaccine available for widespread use in the US this year is “extremely low.”

“I think we need to think of that as largely a 2021 event, and if we do have a vaccine available in 2020, it’s likely to be used in a much more targeted fashion — almost in a therapeutic sense, to protect very high-risk populations,” Gottlieb told CBS.

Several experts have backed the claim that a vaccine will more likely come at the end of this year or at the beginning of next year. But states should be ready to distribute a vaccine by November 1 “just in case” one is ready, according to US Surgeon General Dr. Jerome Adams.

“We’ve always said that we are hopeful for a vaccine by the end of this year or beginning of next year,” Adams told ABC News last week. “That said, it’s not just about having a vaccine that is safe and effective — it’s about being ready to distribute it.”

The US Centers for Disease Control and Prevention has also asked city and state public health officials across the country to prepare to distribute a vaccine by late October or early November.

“Right now I will say we’re preparing earnestly for what I anticipate will be reality … that there’ll be one or more vaccines available for us in November, December — and we have to figure out how to make sure they’re distributed in a fair and equitable way across the country,” Redfield told Yahoo Finance.