US coronavirus: Nearly 70,000 lives could be saved in the next 3 months if more Americans wore masks, researchers say 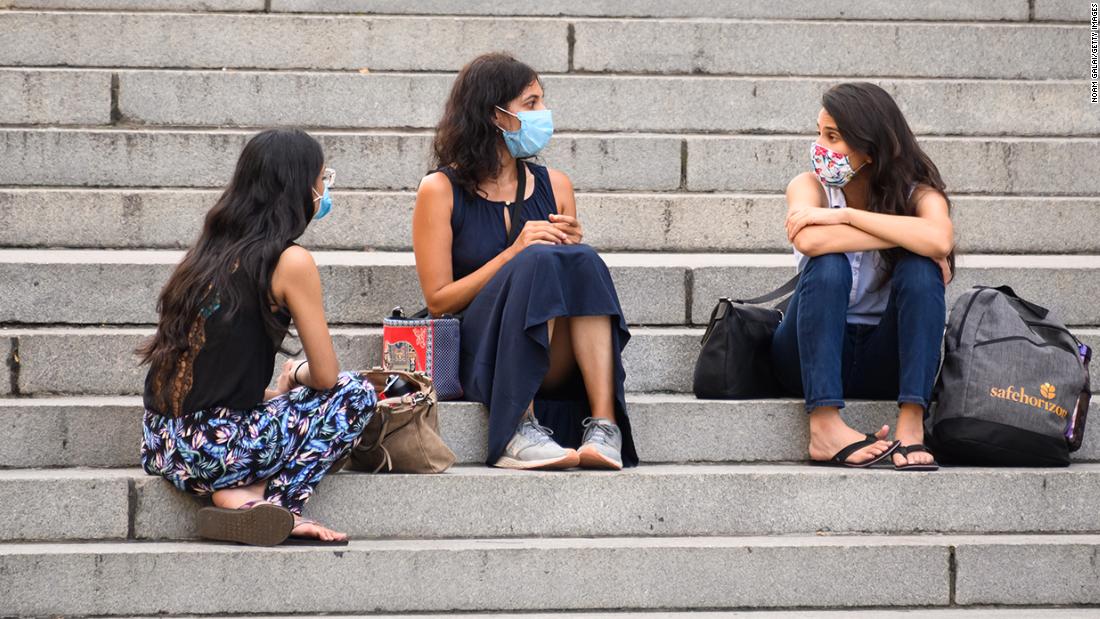 If mask use increases from 53% to 95%, it could save almost 70,000 lives, according to the Institute for Health Metrics and Evaluation at the University of Washington.

“It really depends on what our leaders do,” Dr. Chris Murray, the head of the institute, said.

At least 175,409 Americans have died since the pandemic began, a number the institute projects could reach nearly 310,000 by December 1. The new prediction is about 15,000 deaths higher than their earlier forecast from two weeks ago due to several factors, Murray said.

And there is still increased transmission in states like Kentucky, Minnesota and Indiana, he said.

“There’s more happening around Covid than we sort of expected for this time of the year and that’s playing out into these forecasts,” Murray added.

Across parts of the US, cases have been on the decline for weeks but deaths remain relatively elevated. The country’s seven-day average for daily deaths topped 1,000 for at least 24 days in a row. US Centers for Disease Control and Prevention Director Dr. Robert Redfield said earlier this week he expects deaths to begin declining by next week as a result of continued mitigation measures.

The CDC director expressed concern that while parts of the country are reporting improvement in new cases, states in Midland America like Nebraska and Oklahoma seem to be “stuck” and cases aren’t falling.

“We don’t need to have a third wave in the heartland right now,” Redfield said Thursday. “We need to prevent that.”

Getting safety measures in place now is crucial, Murray said, before fall rolls around, when health officials have predicted the US will see a resurgence of coronavirus cases on top of flu season. Redfield has previously said this fall and winter are likely to be one of the “most difficult times” in American public health.

On Friday, the top health official for Seattle and King County in Washington state warned the state was seeing an increased number of cases linked back to social gatherings.

“We expect Covid-19 to get worse in the fall and winter and people to spend more time indoors,” health officer Dr. Jeffrey Duchin said.

To help prevent widespread infections, Murray said governors need to put mask mandates in place — mandates “with teeth,” that would allow local authorities to fine residents without a face covering.

“It will take a concerted effort but the impact is extraordinary, it’s really quite extraordinary what it could achieve,” Murray said.

In Florida, a 6-year-old girl became the youngest person in the state to die from coronavirus complications. Health officials say they still don’t know if the child contracted the virus from a known case or if this was travel related.
The report of her death comes just weeks after 9-year-old Kimora “Kimmie” Lynum, who had no known underlying health conditions, died from coronavirus complications in Florida.

Florida has reported more than 593,000 infections since the start of the pandemic, second only to California, which has recorded 660,000 positive results.

News about the young girl also come as schools across the US have begun reopening. Some have adjusted plans after hundreds of students and staff were asked to quarantine in response to coronavirus cases.

A Florida judge is expected to rule next week on whether physical schools should reopen. The expected ruling stems from a lawsuit filed by a Florida teacher’s union in efforts to stop the state from requiring school districts to reopen for in-person instruction five days a week.
Across the country, students have also made their way back to college campuses. Despite safety measures in place universities in more than a dozen states have reported cases of the virus, many of which trace to gatherings, Greek Life or athletics. Many institutions have already announced they’ll begin the semester remotely.

Meanwhile, more than two dozen cases of the virus across three states are now being linked back to the Sturgis Motorcycle Rally, an annual gathering that usually draws in about half a million people.

Minnesota reported 15 cases of the virus among people who attended the rally in South Dakota earlier this month, Kris Ehresmann, the Minnesota Department of Health Infectious Disease Director, said Friday.

Among those cases, one person was hospitalized. Officials say they expect more cases over the next few days.

In Nebraska’s Panhandle region, at least seven cases were tied to the rally according to Kim Engel, the director of the Panhandle Public Health District told CNN.