US coronavirus: Local officials call for more federal resources and begin penalizing those who break stay at home orders as deaths near 1,000 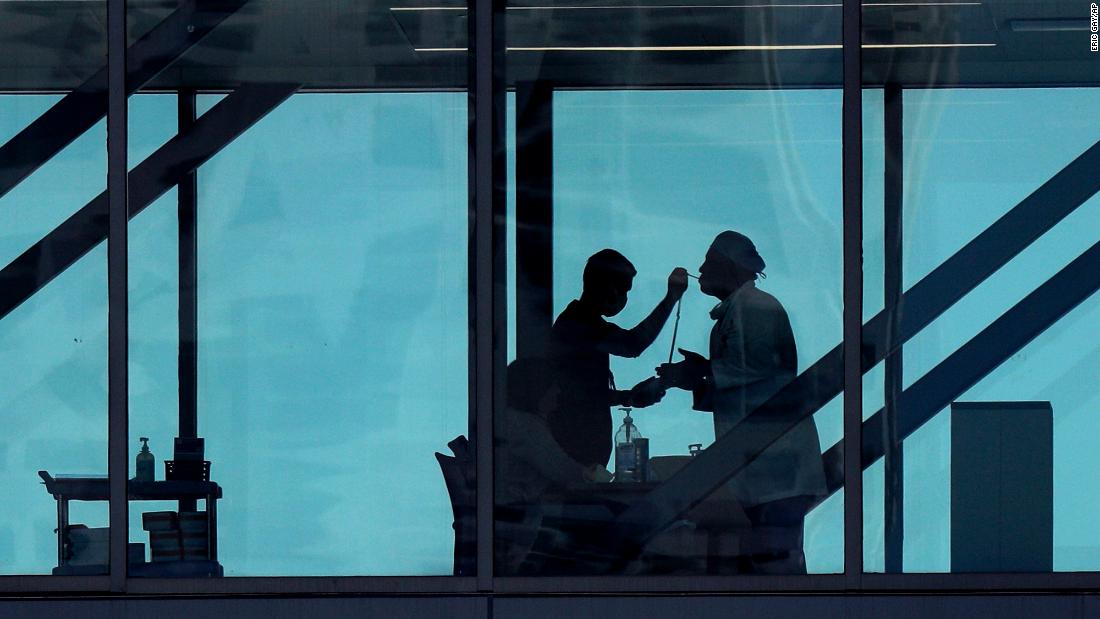 “We originally thought that it would be doubling every six to seven days and we see cases doubling every three to four days,” said Dr. Mark Ghaly, secretary of the California Health and Human Services Agency.

There are now more than 65,000 cases of coronavirus across the US, and fatalities have reached 938. The numbers spiked Wednesday — the deadliest day for reporting of US cases of coronavirus — with 223 deaths reported that day alone. Just four days prior, the death toll stood at 326 people.
To understand the spike in cases, health officials need to increase testing, identify infected people and isolate them while tracing who they have had contact with, Dr. Anthony Fauci, director of the National Institute of Allergy and Infectious Diseases, told CNN’s Chris Cuomo on “Cuomo Primetime” Wednesday.

The world missed the first opportunity to control the virus, but now there is a second opportunity to act, World Health Organization Director-General Tedros Adhanom Ghebreyesus said during a media briefing in Geneva on Wednesday.

“This virus is public enemy number one,” Tedros said.

The action is especially important because Fauci said Wednesday that even when the virus is contained, it likely won’t be completely stopped.

“We’ve got to develop drugs so that when we come around next year, it is not like this again,” he told Cuomo. “Never again like this.”

The call for more research and more doctors

To fight back against the virus, officials are calling for all hands-on deck.

The US Army has reached out to retired medical personnel, saying they need to hear back “STAT” about if they would potentially volunteer in the coronavirus effort, according to an email obtained by CNN.

The Army does not want to interfere with civilian medical needs, but is requesting information for planning purposes, a spokesman for the Army said.
At New York University, the Grossman School of Medicine has sought students who want to graduate early in response to New York Gov. Andrew Cuomo’s “directive to get more physicians into the health system more quickly,” the school said in a statement.

The school still needs the plan to be approved by state and education officials, but as of Wednesday afternoon, at least 69 students had volunteered.

“I’m sure that this virus is just about everywhere but how dense it is, how widespread it is — we don’t know yet. We haven’t tested sufficiently,” Schaffner said. “If we could test a lot more, we would have a much better idea of how distributed this virus is.”

Nearly half of US coronavirus cases are in New York, according to CNN’s tally of cases detected and tested through US public health systems.

As the number of cases climbs, New York is appealing to the federal government for more medical supplies to treat the ill.

New York hospitals have enough personal protection equipment for only the next two weeks, Gov. Cuomo said. The state also needs about 30,000 ventilators. As of noon Wednesday, the state had 4,000 ventilators in hospitals and another 4,000 on the way from the federal government. New York has also purchased 7,000 ventilators and is “still shopping,” the governor said.

The ventilators are the “difference between life and death for thousands of New Yorkers,” New York City Mayor Bill de Blasio said.

Meanwhile, San Francisco Mayor London Breed said that her city could see a surge in cases similar to that seen in New York City, and she warned that with that comes an increased demand for supplies. Breed estimated that San Francisco could need as many as 1,500 more ventilators and 5,000 more hospital beds.

“If people who are out on the streets continue to congregate with one another, continue to interact with one another which increases the spread of this virus, we will not have enough beds, enough ICU units, enough ventilators to support the people that we know are going to need them,” Breed told reporters Wednesday.

“It is not even a question as to whether we will need more,” Breed said.

To ensure that people follow orders to stay at home, some cities have announced plans to penalize people who don’t heed the rules.

Interim Chicago Police Superintendent Charlie Beck said Wednesday that “the educational phase of this is over.” Beck said police will begin issuing citations on Thursday to residents who do not follow rules around social distancing and staying at home.

Breaking the orders is a misdemeanor punishable by a citation with a fine of up to $500, Beck said. If violation continues, it could result in physical arrest.

So far, 21 states have issues stay-at-home orders, with some not going into effect until the end of the week.

New York, which has been hit hard by the pandemic, has restricted nonessential business and gatherings and individuals are being asked to limit outdoor activities to non-contact activities.

Civil fines will be issued to non-compliant businesses, but not individuals, Cuomo said.

Los Angeles Mayor Eric Garcetti clarified Wednesday that the city also will be enforcing restrictions against non-essential businesses that are staying open.

Despite rumors, the Los Angeles Police Department will not, however, be stopping people for exercising and leaving their homes, Garcetti said.