US coronavirus: defeating pandemic that has killed more than 3,000 Americans will take cooperation from everyone, officials say 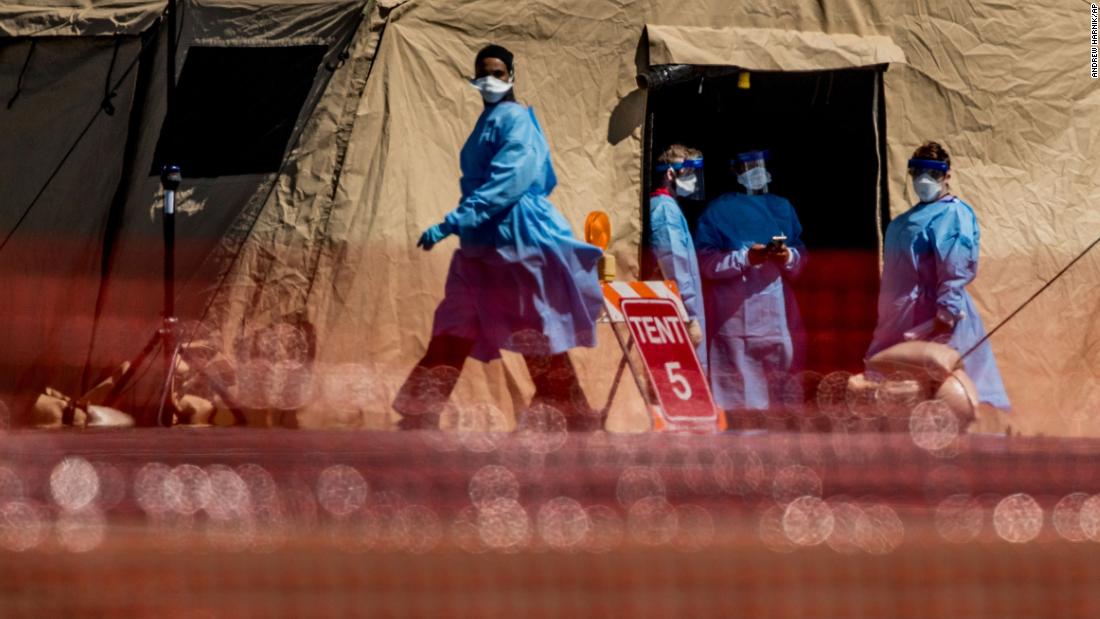 “This is the whole of America approach, the cooperation we’re seeing all the way from the public, private to the interagency, to the state, local and federal part of it,” said Air Force Gen. Terrence J. O’Shaughnessy, who led the effort to convert a New York convention center into a hospital to respond to a rapid increase in patients.

“We have to come together as a team and that’s what we’re seeing, it’s the only way we’re going to get through this,” he said.

At least 3,003 people have died in the US in all but two states and nearly 160,700 have been infected since the first reported case on January 20.

And how well Americans continue to obey social distancing guidelines could be the difference between 100,000 and millions of deaths, said Dr. Deborah Birx, the White House’s coronavirus response coordinator.

More than two dozen governors have stepped up to combat the spread of the virus, issuing stay-at-home orders that now cover more than three-fourths of the American population — and authorities have begun cracking down on those who refuse to abide.

In Kentucky, Gov. Andy Beshear also issued an executive order Monday barring residents from traveling to other states — with just a handful of exceptions — and directing those who are returning to Kentucky from another state to self-quarantine for two weeks.

“Right now we have more cases in other states,” he said. “What it means is your likelihood of getting infected and potentially bringing back the coronavirus may be greater in other states than ours. You need to be home anyways.”

In North Dakota, residents coming back from any of the 24 states the US Centers of Disease Control and Prevention have classified as having “widespread disease” are also required to quarantine for two weeks. Those states include California, New York, Illinois and Georgia.

President Donald Trump extended guidelines on social distancing for another month but said a nationwide stay-at-home order was still unlikely.

But in many states, those orders seem to be paying off.

‘Stay at home, buy us time’

“We are looking at reductions in person to person contact that have progressively improved and have led us to a point where we are making a very positive impact,” said Dr. Jeff Duchin, the public health officer for Seattle and King County.

But that’s no indication to roll back any of those measures, Duchin said.

“We really need to double down on the measures that appear to be working,” he said.

Two weeks after San Francisco issued the country’s first shelter in place order, hospital emergency rooms throughout the region may be seeing the order’s effect.

“The surge we have been anticipating has not yet come,” Dr. Jahan Fahimi, an emergency physician and medical director at the University of California, San Francisco, told CNN. “We’re all kind of together holding our breaths.”

In other parts of the country, walking into work feels like walking into a war zone for many medical care workers.

“There is not enough of anything,” one trauma physician at Miami’s Jackson Memorial Hospital said. “There are just so many patients who are so sick, it seems impossible to keep up with the demand.”

Inside New York City’s Elmhurst hospital, one doctor told CNN “we are at the brink of not being able to care for patients.”

It may seem simple, another doctor says, but staying at home could also be saving those working to save patients.

“It feels like coronavirus is everywhere and it feels like we have very little to protect ourselves from getting very sick ourselves as healthcare workers” Dr. Cornelia Griggs, a Pediatric Surgery Fellow at Columbia University said Monday. “I want everyone at home to know that even though it seems like staying at home is futile, it’s not.”

“We need everyone at home to hold the line, stay at home. Buy us time, flatten the curve.”

Repercussions for those not staying in

Those not following orders to stay at home and keep a distance have begun facing consequences.

A popular Florida pastor was arrested Monday for continuing to hold large services and charged with unlawful assembly and violation of public health emergency rules, both second-degree misdemeanors.

“Last night I made a decision to seek an arrest warrant for the pastor of a local church who intentionally, and repeatedly, chose to disregard the orders set in place by our president, our governor, the CDC and the Hillsborough County Emergency policy group,” Hillsborough County Sheriff Chad Chronister said.

“His reckless disregard for human life put hundreds of people in his congregation at risk, and thousands of residents who may interact with them this week in danger,” he added.

In New Orleans, police issued arrest warrants for a man who organized a funeral second line over the weekend and also cited the band leader.

Police said that more than 100 people participated and the organizer refused to stop the second line when asked by police.

That person’s family reached out to the mayor’s office and apologized this week.

“I heard from the family. They reached out yesterday. They sent their apologies. That it will never happen again. It has really sent a message to our community throughout,” New Orleans Mayor LaToya Cantrell told CNN. “Our musician community, our cultural bearers have stepped up and said, hey, no more in the city of New Orleans. This is — this is very serious here.”

And while the country has just begun its efforts to stop virus numbers from rising, some officials say it’s likely the US may see another outbreak in the fall.

While Trump said “I hope it doesn’t happen,” Dr. Anthony Fauci, the director of the National Institutes of Health, said the virus’ return is likely.

“In fact, I would anticipate that that would actually happen,” Fauci said.

But if it did return, Fauci said “in the fall, it would be a totally different ball game.”

That’s because testing ability at the beginning of the outbreak will be greater and contact tracing will be more effective.

And the administration’s abilities, Fauci said, would be “orders of magnitude better.”