US coronavirus deaths: Over 1,000 reported in the past 24 hours 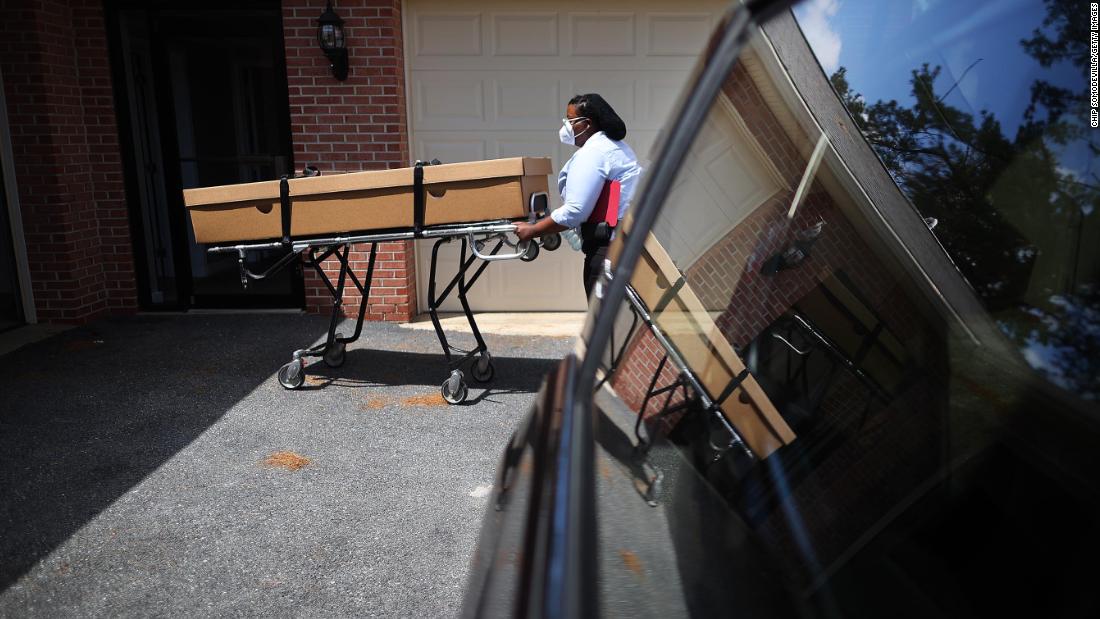 Officials fear those numbers will rise following the protests, and are urging those taking part to get tested.

“Based on the way the disease spreads, there is every reason to expect that we will see new clusters and potentially new outbreaks moving forward,” US Surgeon General Dr. Jerome Adams warned this week.

The effects of the protests on infection rates and hospitalizations will emerge in three to four weeks, CNN’s chief medical correspondent, Dr. Sanjay Gupta, said. He noted factors, such as protests taking place outdoors, could mean a lower risk for transmission of the virus.

The virus is not mutating, but it’s still dangerous

New discoveries about the coronavirus are still emerging. Scientists discovered that it’s not mutating in a way they’d feared early on. But that doesn’t mean it’s any less dangerous, experts said this week.

So far, evidence does not show it’s getting worse or more transmittable. But complacency by people and governments could increase its spread, said Maria Van Kerkhove, a disease epidemiologist at the World Health Organization.

“Scientists are looking to see, are there changes in the virus? And as it is a coronavirus … there are normal changes in this virus that one would expect over time,” she said. “None of these changes so far indicate that the virus itself is changing in terms of its ability to transmit or to cause more severe disease.”

But the presence of the virus over time may lead some people to lower their guards, she said.

“They may become lax in the measures needed to control the spread of the virus, such as social distancing,” she said. “It’s very difficult to keep up all of these measures and we must remain strong and vigilant.”

Early on in the outbreak, there were reports that coronavirus doesn’t affect children as much.

But that perspective is slowly changing, and a new study shows a rare inflammatory syndrome in children initially compared to Kawasaki disease is a little different.

A high proportion of children sick with multisystem inflammatory syndrome, a troubling complication of Covid-19, had gastrointestinal symptoms and were of African ancestry. Those characteristics differ from those of classic Kawasaki disease, according to the study.

The study was among a group of 21 children and teens in Paris who had multisystem inflammatory syndrome. All the patients had gastrointestinal symptoms, such as abdominal pain, vomiting and diarrhea, according to the study published in the medical journal BMJ this week.

And more than half — 57% — had at least one parent who was born in sub-Saharan Africa or the Caribbean Islands.

“While children are more likely to get very sick if they have other chronic conditions, including obesity, it is important to note that children without chronic illness are also at risk,” said Lawrence Kleinman, professor at the Department of Pediatrics at Rutgers Robert Wood Johnson Medical School in New Jersey. “Parents need to continue to take the virus seriously.”

A vaccine may be available next year

The race to find a vaccine remains a priority. About 100 million doses could be available by early next year, said Dr. Francis Collins, director of the National Institutes of Health.

“Perhaps we will have, if all goes well,” Collins told CNN. The US Biomedical Advanced Research and Development Authority, a part of the Department of Health and Human Services, is funding research on five different experimental vaccines.

“I am optimistic that at least one, maybe two, maybe three will come through looking like what we need,” he said. “We want to hedge our bets by having a number of different approaches, so that it’s very likely that at least one of them and maybe more will work.”

Collins’ main concern is that people may be afraid to get vaccinated, and the government will have to assure them it’s safe, he said.

A common, over-the-counter drug used for treating heartburn may have provided relief to coronavirus patients.

Ten patients sick with Covid-19 took famotidine, the active ingredient in Pepcid. In all 10 cases, their symptoms improved, according to a study published Thursday. None were hospitalized, and all survived.

“All patients noticed a rapid improvement in their condition within 24 to 48 hours of starting famotidine,” the study published in the medical journal Gut said. “These findings suggest that famotidine may affect the course of Covid-19.”

A co-author of the study emphasized that it’s a small group of patients. Even so, Dr. Joseph Conigliaro, a physician at Northwell Health in New York, said he was encouraged by the results and plans to do a larger study with outpatients on famotidine.

The economy has been a major casualty of the coronavirus, with an additional 1.9 million workers filing for initial unemployment aid last week.

More than a quarter of the labor force — 42.6 million people — has now claimed benefits since the pandemic began ravaging the US labor market.

To help keep the economy afloat, all US states have reopened in varying phases. In Pennsylvania, more than 80% of the state is in some phase of reopening, and an additional 16 counties will ease their restrictions Friday, Gov. Tom Wolf said.

In Las Vegas, people packed casinos Thursday on reopening day. Most casinos required employees to wear masks and encouraged guests to do so as well, CNN affiliate KTNV reported.

Universal Orlando will reopen to the public Friday. Universal Studios Florida, Universal’s Islands of Adventure and Universal’s Volcano Bay will welcome guests but with limited attendance.

“This carefully managed reopening comes with stringent new health, safety and hygiene procedures in place. … Everyone will need to follow CDC guidelines and the recommendations of health officials, and Universal Orlando’s policies,” the resort said in a statement.