US coronavirus: Covid-19 infections among students have already caused some colleges to change their plans 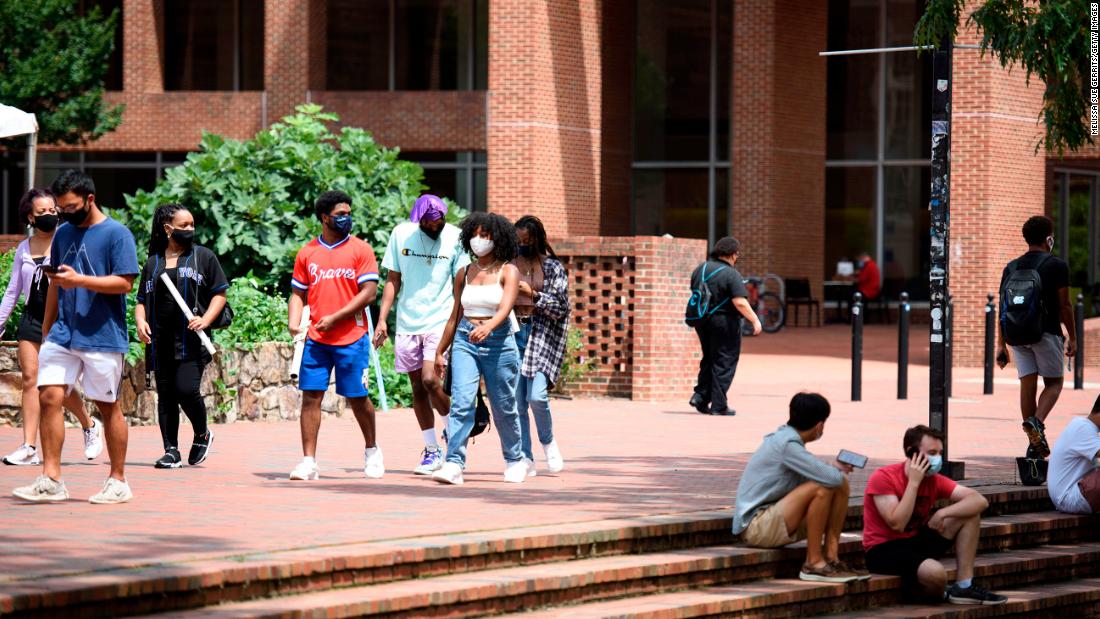 Young people — who US officials say helped drive a nationwide surge of new coronavirus cases over the summer — are now returning to college campuses across the country. With them have come reports of hundreds of infections. Despite efforts to keep the virus at bay, outbreaks have been traced to off-campus gatherings, sororities and fraternities, and dorms, leaving schools to reassess how to proceed with the fall semester.

At Appalachian State University, a cluster was associated with the football team. Iowa State University said 175 students tested positive for the virus — about 2.2% of those tested — during move-in.

“It’s just extremely difficult to consider yourself to be in a bubble when there is a very high level of community spread around you or when people are coming from all over the country and congregating on college campuses,” said Dr. Leana Wen, the former Baltimore City Health Commissioner. “You can’t keep coronavirus out.”

Across the US, the spread of the virus is still very much not under control. The country has reported more than 1,000 new deaths in a day at least 12 times this month. In Florida, officials reported deaths of more than 200 people in a day — for at least the 10th time in the past month. More than 5.4 million Americans have been infected since the start of the pandemic and at least 171,821 have died.

While older Americans and those with underlying conditions are at greater risk of severe illness, health officials have emphasized it’s not only those populations that should be cautious.

Coronavirus cases in children steadily increased from March to July, experts said earlier this month and one in three children who were hospitalized were admitted to intensive care — the same as adults.

And younger people who may recover from the virus with minimal symptoms and in many cases don’t require hospitalization, still can have “residual symptoms for weeks and sometimes month,” said Dr. Anthony Fauci, the director of the National Institute of Allergy and Infectious Diseases.

“We’d better be careful when we say ‘Young people who don’t wind up in the hospital are fine, let them get infected, it’s OK.’ No, it’s not OK,” Fauci said during an American Society for Microbiology briefing on Monday.

Some university leaders made it clear from early on that there will be zero tolerance when it comes to violating safety guidelines.

Fourteen Drake University students were asked to leave the campus for two weeks after violating an agreement signed by students that outlined health and safety protocols for the year.

Several of the students “are now facing repercussions through the Code of Student Conduct,” said a letter from the Dean of Students Jerry Parker.

“This message is not intended to call out the students involved — it is a reminder that we must hold each other accountability,” Parker wrote.

The letter echoes the sentiment of another university president, who sent a stern warning to students who don’t follow safety guidelines.

“Let me be perfectly clear, if we don’t do these things, YOU WILL BE SENT HOME and more importantly, our community members’ health will be at risk,” Villanova University President Peter M. Donohue wrote last week.
Coronavirus: Your questions, answered

Rising cases have led some colleges to scrap plans for in-person learning to start the school year.

All undergraduate classes at the University of Notre Dame will be remote for the next two weeks as the university tries to get a recent spike in coronavirus cases under control, the president announced this week. Michigan State University classes will begin remotely for all undergraduates, President Samuel L. Stanley announced.

The school said it still plans to play sports this fall, despite no longer holding in-person classes. The University of Alabama announced spectators will be allowed at home football games, saying this week it prohibits tailgating on campus but will allow fans to fill up about 20% of the Bryant-Denny Stadium. That venue usually holds about 20,000 fans.

Ithaca College, in New York, which previously pushed back its fall in-person semester to October, announced this week it was shifting to remote instruction for the entire semester.

“I sincerely believe this is the correct and responsible choice for Ithaca College to help protect the health and safety of our students, their families, our faculty and staff, and our Ithaca-area communities,” President Shirley M. Collado wrote in a letter to the community.

Saliva test could be in use within weeks

Meanwhile, SalivaDirect, the test that got the green light from the FDA last week, could be in use by approved labs within the next few weeks, says Anne Wyllie, an epidemiologist at Yale School of Public Health who was part of the team responsible for the protocol.

“It’s been actually very inspiring to see how many labs have already reached out to us — how many are ready and willing to get going with SalivaDirect,” Wyllie told CNN.

This is great news for many Americans who still have to wait several days to receive their results — a waiting period that some health officials have called counterproductive to the country’s efforts to get the virus under control.

The test doesn’t require specialized supplies and can deliver results in less than three hours. Officials have called the test a “game changer” and one expert has also pointed to its expected low cost.

“We simplified the test so that it only costs a couple of dollars for reagents, and we expect that labs will only charge about $10 per sample,” said Nathan Grubaugh, a Yale assistant professor of epidemiology.