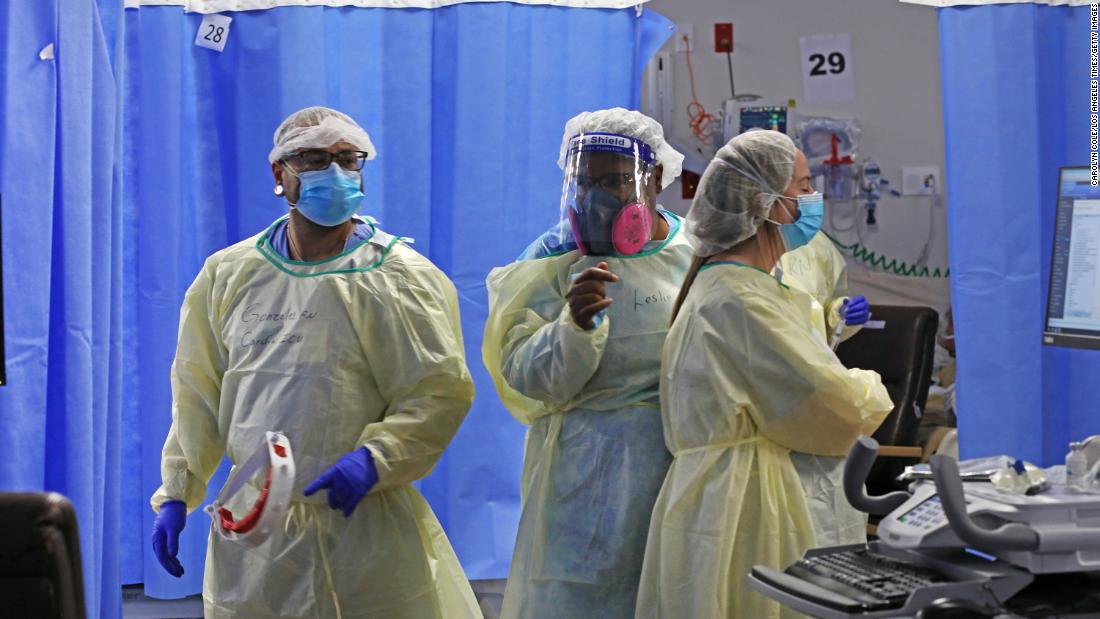 And models project that there will be up to 175,000 deaths linked to the virus by August 15, according to an ensemble forecast published by the US Centers for Disease Control and Prevention. The Institute for Health Metrics and Evaluation projects there will be around 165,000 US deaths by that time.

The grim patterns come as several states have reported record-breaking numbers of new cases and deaths in the past weeks. Some local leaders, including Houston Mayor Sylvester Turner and Los Angeles Mayor Eric Garcetti, have mentioned the possibility of a second stay-at-home order as officials warn of strained testing labs and overwhelmed hospitals.

“Right now, we are on a path to lose more than 200,000 American lives by November 1st. Yet, in many states people can drink in bars, get a haircut, eat inside a restaurant, get a tattoo, get a massage, and do myriad other normal, pleasant, but non-essential activities,” the letter read, which was sent to the Trump administration, members of Congress and state governors.

In the past two days, these states broke records:

California, which is leading the nation with the most recorded coronavirus cases, reported 159 deaths linked to the virus Friday — the highest number recorded in a single day since the start of the pandemic. That number comes just a day after the state’s previous daily record of 157 deaths. More than half of all virus-related deaths in the state come from Los Angeles County, where more than 4,260 deaths have been reported. The state has had more than 446,450 reported infections, according to Johns Hopkins.

Oregon reported nine new coronavirus-related deaths Friday, breaking its record for most reported fatalities in a single day since the pandemic began. Those deaths were recorded in people aged 61 years or older. Health officials in the state reported 396 new cases, bringing the state’s total to more than 16,100.

“Some of the cases we’re reporting today are associated with existing clusters, known cases and household spread, but others are new, unassociated cases that indicate increasing community spread,” Health Director Bruce Anderson said in a statement.

In Florida, a state that has beat its own record of new cases several times in recent weeks, coronavirus hospitalizations have jumped by nearly 80% since July 4, according to data released to CNN by the state’s Agency for Health Care Administration (AHCA).

And across the state, at least 50 hospitals have no ICU beds available, a number similar to last weekend’s.

Last week, a 9-year-old girl with no pre-existing conditions became the state’s youngest coronavirus victim. Her family says Kimora “Kimmie” Lynum was taken to a local hospital to treat a “very high” fever.

The girl’s cousin and family spokesman Dejeon Cain said the hospital instructed the family to return home. After doing so, the young girl complained of not feeling well and collapsed. She didn’t have a detectable heartbeat, Cain added.

Her family says they don’t know where the child contracted the virus, as she had appeared healthy and had spent the summer at home.

In Texas, which broke a record for virus-related deaths last week, doctors inside one hospital along the US-Mexico border may decide to send patients home to “die by their loved ones” due to limited resources, officials said.

Officials in Starr County announced they’re creating committees to review patients’ cases at the Starr County Memorial Hospital — where at least 50% of patients admitted to the hospital’s emergency room have tested positive for coronavirus.

“Unfortunately, Starr County Memorial Hospital has limited resources and our doctors are going to have to decide who receives treatment, and who is sent home to die by their loved ones,” Starr County Judge Eloy Vera wrote in a Facebook post on Thursday. “This is what we did not want our community to experience.”

Earlier this month, the governor ordered a statewide mask mandate and urged residents to heed the precautions in order for businesses and the economy to remain open.

As the state grapples with controlling the spread of the virus, Gov. Greg Abbott also had to issue a disaster declaration for 32 counties after Hurricane Hanna made landfall Saturday evening.

CDC in favor of reopening schools

Many teachers and staff members across the US have strongly opposed a return to school next month as the virus runs uncontrolled across American communities. Others — including in a Georgia county where coronavirus numbers are among the highest in the state — are demanding schools reopen.

President Donald Trump has also said he’s putting pressure on governors to reopen schools in a push to get the country back to business as usual.

In new guidelines posted last week on education and childcare, the CDC came down hard in favor of reopening schools, saying children don’t suffer much from coronavirus and are less likely to spread it.

That comes after research from South Korea found that older children (between the ages of 10 and 19) can transmit the coronavirus within a household just as much as adults.

The CDC guidelines recommended local officials consider closing schools — or keeping them closed — if there is substantial, uncontrolled spread of the virus.

“It is critically important for our public health to open schools this fall,” CDC Director Dr. Robert Redfield said in a statement announcing the updates. “School closures have disrupted normal ways of life for children and parents, and they have had negative health consequences on our youth. CDC is prepared to work with K-12 schools to safely reopen while protecting the most vulnerable.”