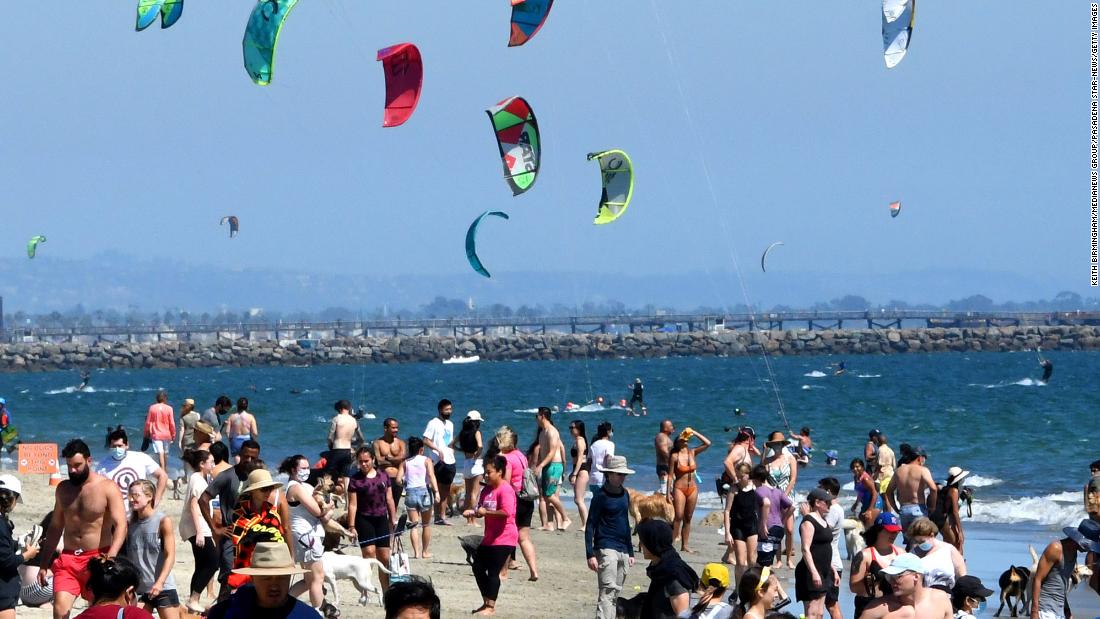 “It’s not just what’s opened and closed, it’s also about what we do individually. It’s about the people who are getting together outside of their households, with people they might know. It might be their extended family, it might be friends. They might think because they got a test two weeks ago, that it’s okay. But it’s not.”

Last week, Houston Mayor Sylvester Turner also discussed his proposal to the state’s governor for a two-week shutdown due to the rise in cases. He said the city needed to “reset,” especially as leaders begin conversations about reopening schools.

But Texas Gov. Greg Abbott has said a statewide lockdown is not happening.

“People are panicking, thinking I’m about to shut down Texas again,” he told CNN affiliate KPRC Wednesday. “The answer is no. That is not the goal.”

Turner’s proposal parallels what Atlanta Mayor Keisha Lance Bottoms announced last week: that the city’s reopening be rolled back to Phase 1, when residents were ordered home except for essential trips. Georgia Gov. Brian Kemp slammed the decision calling it “confusing” and “legally unenforceable.”
The two leaders in the state have since been clashing on coronavirus guidelines, after Kemp sued the mayor over a mask mandate she ordered for the city.

The different approaches are just some examples of the conversations between local and state leaders across the US as cases surge and hospital capacities dwindle.

In a month, the US beat its own record of new cases in a day at least nine times. So far, more than 3.7 million Americans have tested positive for the virus and at least 140,534 people have died, according to data from Johns Hopkins University.
Coronavirus: Your questions, answered

With most state leaders vowing not to fall back into a second shutdown, many have leaned in on mask mandates to help curb the spread of coronavirus.

In Colorado, the governor issued a statewide mask mandate and said Sunday his state saw a lower spread of the virus in areas that saw more mask usage.

“With the desire to keep the economy open, to maximize the ability to return to school in as safe a way as possible for teachers and for students, the mask mandate was really an easy decision after I saw that data,” Gov. Jared Polis told ABC’s “This Week.”

Experts have repeatedly highlighted masks are among the most powerful weapons the country can use against the virus. Dr. Anthony Fauci, the nation’s leading infectious disease expert has urged governors and mayors to be “as forceful as possible” to get Americans to wear face coverings.

Why the guidance on face masks has changed
In Florida, where daily new cases have tripled in a month, the governor has resisted implementing a mandate and said the state would not be prosecuting people who don’t wear face coverings.

But in the city of Miami, officials are doubling down on an existing mask order. Starting Monday, residents who fail to wear a face mask in public will be fined without first getting a warning. That fine starts at $50 and will increase at every additional offense.

Speaking on NBC’s “Meet the Press” Sunday, National Institutes of Health Director Dr. Francis Collins said it was “bizarre that we have turned the mask wearing into something political.”

“You’d wonder what is going on here? How could it be that something as basic as a public health that we have very strong evidence can help, seems to attach to people’s political party,” he said.

“This is not a war, but in a certain way it is, against the enemy which is called the virus and that virus is very sneaky and stealthy.”

Meanwhile, as states navigate their next steps to combat the rapid spread, unwanted records keep getting smashed.

Older children can transmit virus as much as adults

While more states are reporting surges, local leaders are discussing what a return to school will look like. President Donald Trump has already said he’s pressured governors to ensure a return to classrooms across the country in the fall.

In Arizona, where the governor has indicated he’ll give more guidance on school reopenings in the coming days, 87 healthcare professionals signed a letter urging the state leader to keep schools closed for the first quarter of the school year.

“We share a common concern: that the tremendous pressure to return to in-person schooling in August is ill-advised and dangerous given the uncontrolled spread of Covid-19 in our community,” the letter said.

The decisions about a return to class come as new research reveals older children (between the ages of 10 and 19) can transmit the virus within a household just as much as adults.

The researchers in South Korea also found that children ages 9 and younger transmitted the virus within their household at rates that were a lot lower.

“Although the detection rate for contacts of preschool-aged children was lower, young children may show higher attack rates when the school closure ends, contributing to community transmission of Covid-19,” the study said.