US coronavirus: As students head back to campus, colleges try to prevent and combat Covid-19 cases 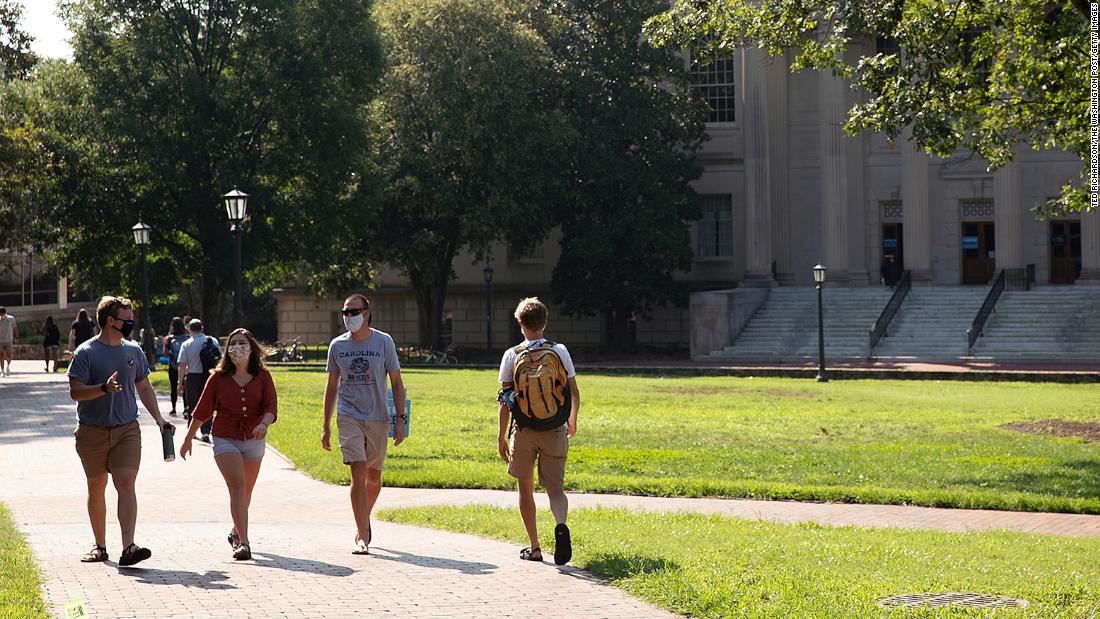 While US leaders are still grappling to enforce safety guidelines throughout their communities, university heads have re-structured the entire fall semester hoping to avoid outbreaks and a second shutdown. Institutions that opted not to start classes solely online have adopted new features for move-in, including temperature checks, coronavirus testing, mandatory quarantines, plexiglass dividers and other additions meant to minimize contact between students and staff.
Some experts worry it might not be enough to control the virus that’s still running rampant in some parts of the country. More than 5.3 million Americans have been infected and at least 169,481 have died.

“Are colleges safe in general to open up right now? I would say probably not,” said Dr. James Phillips, a physician and assistant professor at George Washington University Hospital. “When we look at high schools, there’s a much more controlled environment there for the students and the teachers.”

School reopenings have also made headlines as districts across the country welcomed students back to class and some had to readjust their plans following positive cases. According to new guidance from the US Centers for Disease Control and Prevention, the number and rate of coronavirus cases in children have been “steadily increasing” from March to July.

In universities, where young groups of people gain access to a newfound freedom, Phillips said, “there are so many other variables that go in that are going to make it incredibly difficult to keep the virus out of the classrooms and out of those living spaces.”

In Pennsylvania, Villanova University’s president sent a stern warning to students this week, saying that those who opt not to follow health guidelines like washing their hands and wearing a mask at all times will “BE SENT HOME.”

“If you can’t or won’t commit to this new way of doing things, then you shouldn’t be here. It’s as simple as that.”

The University of North Carolina at Chapel Hill said Saturday a cluster of cases was identified in the Sigma Nu fraternity. The announcement comes a day after the university announced clusters had been identified in the Ehringhaus Community and Granville Towers.
Donde Plowman, the chancellor of University of Tennessee, Knoxville, said there were a total of 28 active cases, 20 of which were students and eight were employees. More than 150 people were in self-isolation last week, most of whom were non-residential students and employees.

“Part of what we look at to make decisions about campus operations are our ability to isolate and quarantine residential students as well as keeping up with contact tracing,” Plowman said.

In Ohio, Cedarville University confirmed a student had tested positive and is isolated on campus, CNN affiliate WCMH reported.

“The student is in good condition and will remain in isolation during recovery,” President Thomas White wrote in a letter, according to the affiliate. “The students who may have been exposed are in quarantine, monitoring for symptoms.”

The president said the student was the first and only case on campus.

Meanwhile, the US Food and Drug Administration announced it granted emergency use authorization to a coronavirus diagnostic test that uses a new and inexpensive method of detecting the virus through saliva samples.

That’s good news: some Americans still have to wait days to receive their testing results and now groups like the American Medical Association are calling for guidelines that help fast-track Americans who need their tests and results urgently.

With the newly authorized test, saliva is self-collected, under the observation of a health care worker, in a sterile container without the use of a specific swab or collection device. That test can yield results in less than three hours, researchers said, and up to 92 samples can be tested at once.

As for the cost: researchers said they expect labs to charge about $10 per sample.

The NBA was among the groups that funded research for the test and currently uses the method to test asymptomatic people for the virus.

CNN’s Kay Jones and Lauren Mascarenhas contributed to this report.