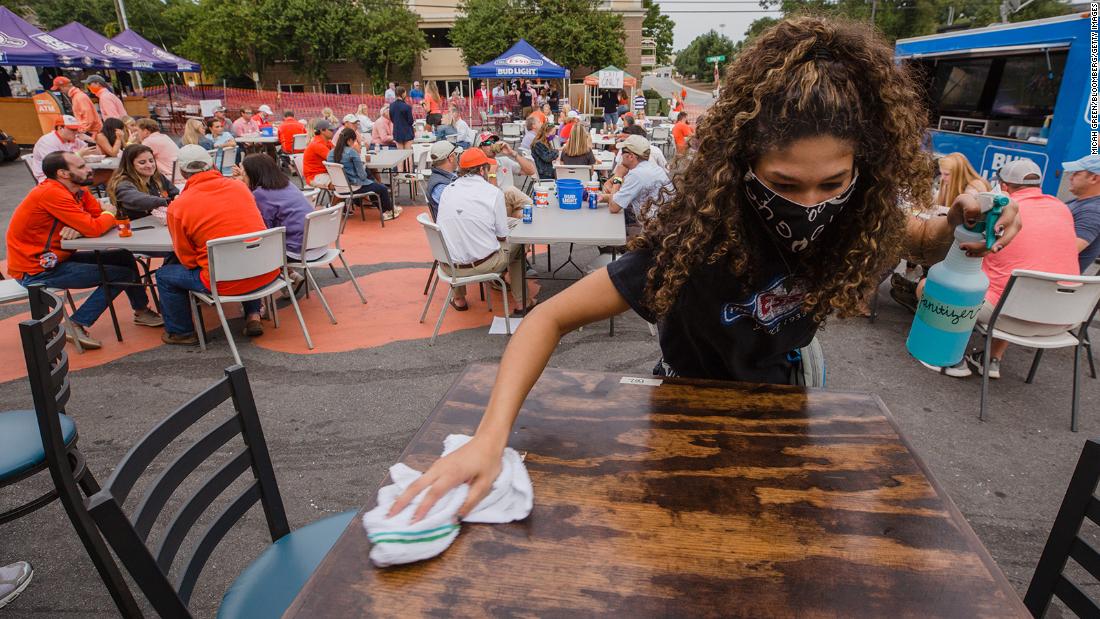 Speaking to the Senate Health Committee this week, US Centers for Disease Control and Prevention Director Dr. Robert Redfield said preliminary results on the first round of a study by the agency show more than 90% of the population is susceptible.

The US continues to lead the world in both deaths and infections and now experts warn that the spread of the virus could get much worse with schools now open and flu season on its way.

At least 22 states — mostly across the US heartland and Midwest — are reporting an increase in new Covid-19 cases compared to the previous week. Nationwide, the US is averaging more than 43,000 new cases per day — about double what the country was averaging back in June when lockdown restrictions were easing.

And the country is no longer seeing the kind of decline in deaths it was seeing in late August, according to infectious diseases expert Dr. Jeanne Marrazzo.

Marrazzo said it’s not unfathomable another 100,000 Americans could die by the end of the year. Researchers with the University of Washington’s Institute for Health Metrics and Evaluation predict a total of more than 378,000 Americans will have died from Covid-19 by January 1.

“The bottom line is that it doesn’t matter what side of the aisle you’re on politically,” Marrazzo said during an Infectious Diseases Society of America briefing Wednesday. “The numbers are the numbers. You can’t argue with them. And they are not going in the right direction.”

20% of summer Covid-19 cases were in young people

Warnings from experts have remained the same for months: wear a mask, wash your hands, social distance and avoid crowded places.

Over the summer, many of those warnings targeted younger groups, after public health officials and state leaders said young people were helping drive a surge of new cases.

A new report from the CDC now shows people ages 20 to 29 accounted for more than 20% of all confirmed Covid-19 cases between June and August.

In June, Southern states saw an increase in positive tests among 20 to 39-year-olds a little more than eight days before increases among those 60 or older were reported — suggesting younger adults drove community spread of the virus.

The CDC noted younger people are more likely to work frontline jobs that leave them exposed and they may be less likely to heed social distancing guidelines. And because younger groups are more likely to have milder symptoms or show no symptoms at all, they could have been spreading the virus without ever knowing.

That’s also what some experts have cautioned could happen if students go back home from college campuses and unknowingly bring the virus with them. More than 59,000 Covid-19 cases have been reported in colleges and universities in all 50 states.

More than 587,000 children in the US have tested positive for the virus since the start of the pandemic, according to the American Academy of Pediatrics and the Children’s Hospital Association.

The organizations found that 74,553 child cases were reported between September 3 and 17 — a 15% increase in this group over two weeks, according to their weekly pediatric report.

Cases listed by age are provided by health department websites in 49 states, New York City, the District of Columbia, Puerto Rico and Guam, but only a subset of states report hospitalizations and mortality by age, the groups said. The AAP called for more detailed reporting from states.

“At this time, it appears that severe illness due to Covid-19 is rare among children,” the report said. “However, states should continue to provide detailed reports on Covid-19 cases, testing, hospitalizations, and mortality by age and race/ethnicity so that the effects of Covid-19 on children’s health can be documented and monitored.”

The updated numbers come as many students across the country have returned to class. Scientists are still looking to better understand the role children play in transmission, but studies have shown they can spread the disease. And a recent report released by the CDC says children can not only spread the virus, but they can do so even when they show mild or no symptoms at all.

While a timeline for when a vaccine will be widely available still remains unclear, National Institutes of Health Director Dr. Francis Collins says two more Phase 3 vaccine trials will likely start “in the next month or month and a half.”
His statement comes as sources say the US Food and Drug Administration is considering new rules for authorizing a Covid-19 vaccine. One source said the FDA is expected to tell vaccine makers they need to wait two months after giving all their study participants their second doses of the vaccine until they can apply for an emergency use authorization.

According to Dr. Anthony Fauci, the nation’s leading infectious disease expert, a “large proportion” of the US will not be vaccinated against Covid-19 this year.

“We’re not going to have all of the doses available, for example, by the end of December, they will be rolling in as the months go by,” Fauci said. “By the time you get to maybe the third or fourth month of the 2021, then you’ll have doses for everyone,” he said.

Those prioritized for the vaccine will likely be healthcare providers, people with underlying conditions and vulnerable populations, he said.