US cigarette packs and ads to include graphic warnings, FDA says 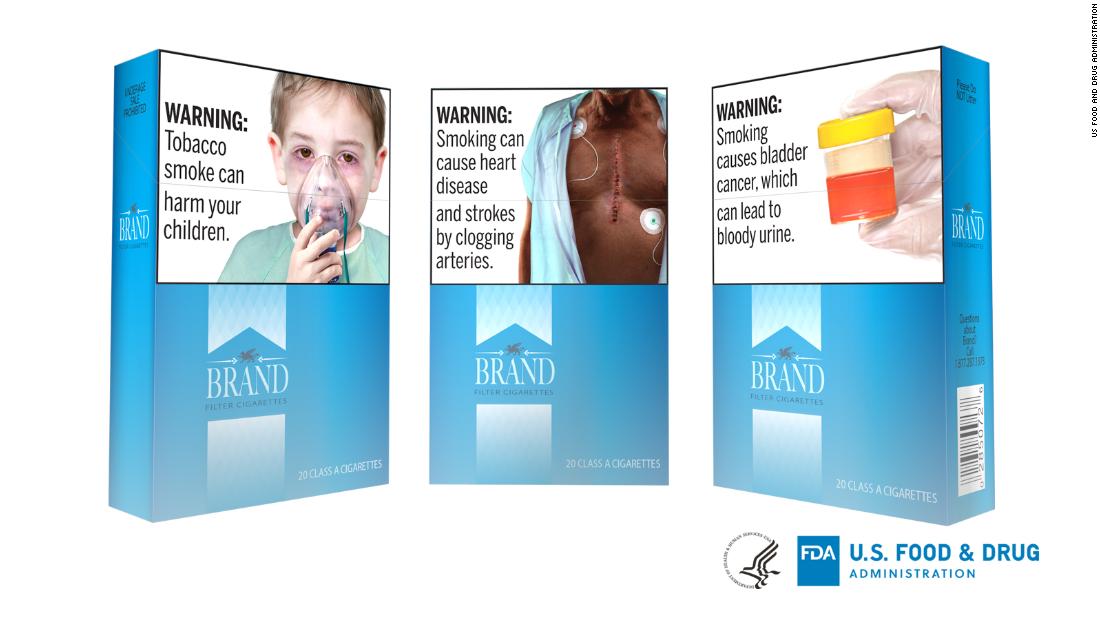 “The 11 finalized cigarette health warnings represent the most significant change to cigarette labels in more than 35 years and will considerably increase public awareness of lesser-known, but serious negative health consequences of cigarette smoking,” Mitch Zeller, director of the FDA’s Center for Tobacco Products, said in a news release on Tuesday.

“Research shows that the current warnings on cigarettes, which have not changed since 1984, have become virtually invisible to both smokers and nonsmokers, in part because of their small size, location and lack of an image. Additionally, research shows substantial gaps remain in the public’s knowledge of the harms of cigarette smoking, and smokers have misinformation about cigarettes and their negative health effects,” Zeller said. “The new cigarette health warnings complement other critical FDA actions, including outreach campaigns targeted to both adults and youth, to educate the public about the dangers associated with using cigarettes, as well as other tobacco products.”

The proposed warnings feature color images and describe the health risks of smoking, warning, “Smoking reduces blood flow to the limbs, which can require amputation,” and “Smoking causes bladder cancer, which can lead to bloody urine.”

“The U.S. Food and Drug Administration today has taken a critical and long-overdue step forward in the nation’s battle against tobacco use — the number one cause of preventable death,” the statement said in part. “The new warnings show and tell the truth about the deadly consequences of smoking and will promote greater public understanding of the many ways in which smoking harms the human body.”

R.J. Reynolds Tobacco Company, which is among the tobacco companies impacted by this FDA rule, issued a statement in response on Tuesday.

“We support the goal of reinforcing and sustaining the near universal public awareness of the dangers of smoking, but attempting to shock cigarette smokers away from making an informed choice through the use of grotesque pictorial warnings is poor public health policy as well as an unconstitutional violation of free speech,” Kaelan Hollon, a spokesperson for Reynolds American Inc., said in the emailed statement. Reynolds American is the parent company of R.J. Reynolds Tobacco Company in the United States.

“We firmly support public awareness of the harms of smoking cigarettes, but the manner in which those messages are delivered to the public should comply with First Amendment protections that apply to all speakers, including cigarette manufacturers,” the statement said. “Publication of the comparative risks of other tobacco products by FDA to the public is imperative, so that adults who wish to continue to use them can make fully-informed decisions between product options in the tobacco category. We are evaluating our options and will communicate next steps soon.”