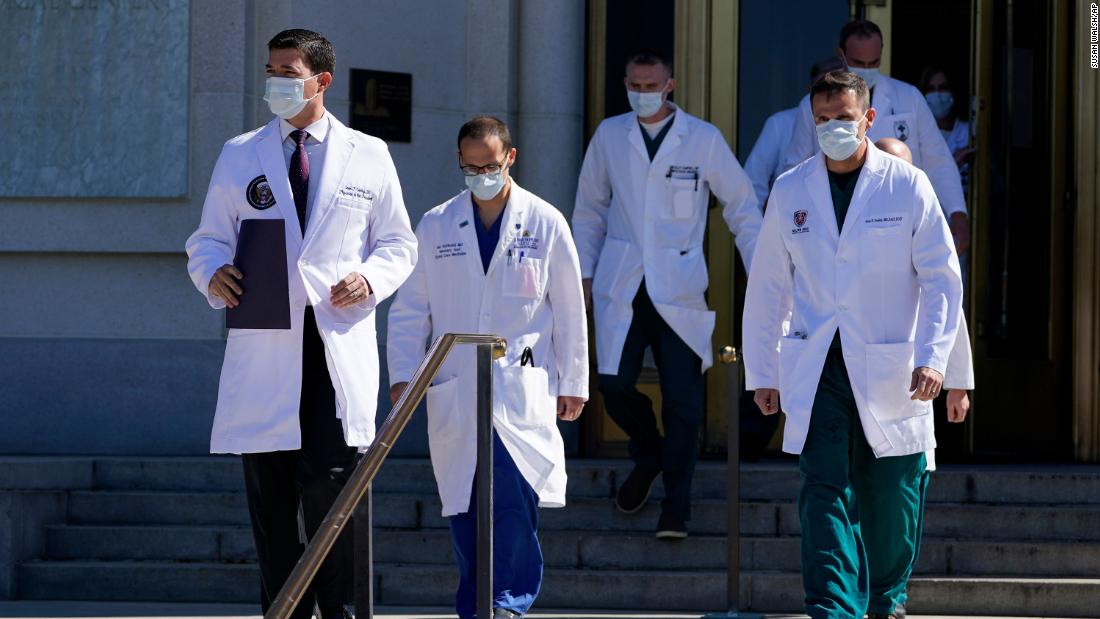 Trump posted on Twitter around 1 a.m. Friday that he and first lady Melania Trump had tested positive for the coronavirus, and the White House announced Friday afternoon he had been treated with Regeneron’s experimental antibody therapy.

But during a briefing just before noon on Saturday, Conley said that Trump was “just 72 hours into the diagnosis now,” which would have put his diagnosis at midday Wednesday. Another physician, Dr. Brian Garibaldi, said Trump was treated with an experimental antibody therapy “about 48 hours ago,” which would have been midday Thursday.

The doctors did not address the timing discrepancies during the briefing, but Saturday afternoon, Conley released a memo aimed at clarifying the timeline.

“The President was first diagnosed with COVID-19 on the evening of Thursday, October 1st and had received Regeron’s antibody cocktail on Friday, October 2nd.”

A positive Covid-19 test midday Wednesday and use of an experimental treatment midday Thursday would move up significantly the timeline of Trump’s illness.

On Tuesday night, Trump participated in the first presidential debate. Cleveland Clinic, which hosted the debate, confirmed to CNN that it required everyone in the debate hall to have a negative Covid-19 test, but did not say when tests needed to be taken, what tests were used or how campaigns were required to disclose test results.

On Wednesday, Trump visited Minnesota. And on Thursday — after Trump aide Hope Hicks had developed symptoms — the President attended a Bedminster, New Jersey, fundraiser that included an indoor roundtable, an indoor VIP reception with a socially distant photo-op and outdoor reception.

“I’m not going to get into all the testing going back,” Conley said during the Saturday briefing. “But he and all the staff … routinely are tested.”

When asked about the 72-hour remark, Conley said, “So Thursday afternoon following the news of a close contact is when we repeated testing.

“And given kind of clinical indications we had a little bit more concern. And late that night we got the PCR confirmation that he was…” Conley said, trailing off.

During the same Saturday briefing, Garibaldi, one of the team of doctors treating Trump at the Walter Reed, told reporters Trump was treated with an experimental antibody therapy “about 48 hours ago,” which would have been midday Thursday.

“About 48 hours ago, the President received a special antibody therapy directed against the coronavirus,” Garibaldi said just before noon on Saturday.

Conley had said in a memo released Friday afternoon, “Following PCR-confirmation of the President’s diagnosis, as a precautionary measure he received a single 8 gram dose of Regeneron’s polyclonal antibody cocktail.” The memo did not specify when the PCR confirmation took place.

Regeneron has confirmed it provided a single 8-gram dose of its antibody therapy to be used by Trump, but did not specify when it received the request.

CNN’s Jen Christensen and Jason Hoffman contributed to this report.