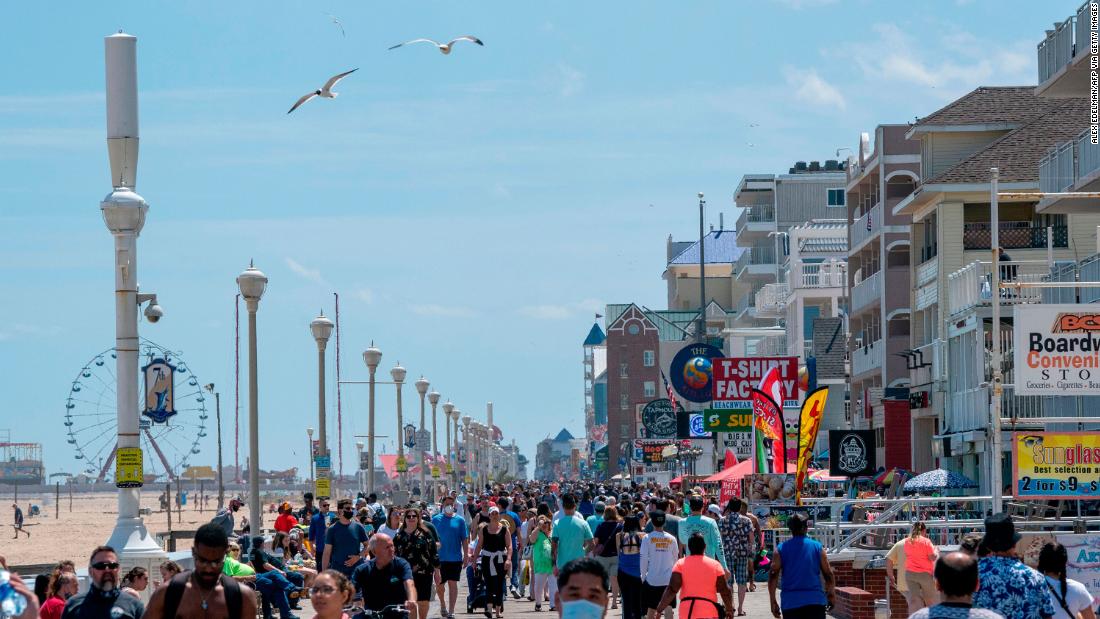 Many people, undoubtedly, continued to abide by new restrictions set in place to curb the spread of the coronavirus — staying in small groups, wearing masks and keeping a distance from others. But in some parts of the country, Memorial Day happenings looked not at all unlike any other year. People jammed into tight spaces, grabbed drinks in groups at oceanfront bars and lined their chairs and towels alongside each other on the beach.

The holiday weekend push for a return to normal life comes as health officials continue to warn that the US has not contained the virus. So far, more than 1.6 million Americans have been infected and at least 98,223 have died, according to data from Johns Hopkins University.

In 10 states, the number of new cases is on the decline, while it seems to be steady in 22 states, according to the data.

But in 18 states — including Georgia, Arkansas, California and Alabama — the number of new cases is rising.

That didn’t appear to be a concern for some of the thousands of beachgoers who spent the weekend in Gulf Shores, Alabama.

“My family has the same mindset as me and we kind of just agreed that if we get it, we get it. We’re going to handle it as a family and get over it,” one beachgoer told CNN’s Gary Tuchman.

In Arkansas, where health officials reported a pool party last week resulted in a cluster of new cases, the governor said the state was experiencing a second peak.

Despite the warning, crowds gathered over the weekend in Lake Hamilton, Arkansas, where Karen Lee told CNN affiliate KARK there were many people going without masks.

“We’re all just embracing it,” Lee told the news station. “I could get killed by Covid today or I could get hit by a bus or a car tomorrow. I am practicing proper hand washing and hygiene.”

Officials with the World Health Organization said this week a second peak during this first wave of the virus is possible — especially if countries discontinue public health and social measures that help slow the virus’ spread.

The second wave of the pandemic would likely not hit before the fall, but a second peak in this first wave could be much sooner, officials said.

“We need to be also cognizant of the fact that the disease can jump up at any time. We cannot make assumptions that just because the disease is on the way down now that it’s going to keep going down and that we’re going to get a number of months to get ready for a second wave — we may get a second peak in this wave,” Dr. Mike Ryan, executive director of WHO’s Health Emergencies Programme, said Monday.

Maria Van Kerkhove, a WHO infectious disease epidemiologist, said “all countries need to remain on high alert” and be able to “rapidly detect cases.”

“A hallmark of coronaviruses is its ability to amplify in certain settings, its ability to cause transmission — or super spreading events. And we are seeing in a number of situations in these closed settings. When the virus has an opportunity, it can transmit readily,” Van Kerkhove said.

Where states stand on reopening

How officials are responding

To avoid a rise in new cases, state and local officials are working to enforce the restrictions in place across most of the country.

Health officials in St. Louis County, Missouri, issued a travel advisory Monday after videos surfaced from Lake of the Ozarks, where hundreds crowded a pool party.

“This reckless behavior endangers countless people and risks setting us back substantially from the progress we have made in slowing the spread of COVID-19,” County Executive Dr. Sam Page said in a statement.

The county said those who were in the area should self-quarantine for two weeks if they didn’t practice social distancing.

In Houston, Texas, officials announced Sunday authorities would begin enforcing capacity limits after the city received hundreds of complaints over the weekend of bars and restaurants that were violating those limits.

There will no longer be lifeguards on duty, parking will be limited and access to bathrooms, changing rooms and concessions is no longer allowed, according to the news station.

In southern California, officials shut down the Eaton Canyon Natural Areas and Trails for part of Sunday and all of Monday after “overwhelming crowds,” CNN affiliate KCBS reported.

The Los Angeles County Department of Parks & Recreation said authorities were monitoring the area but that was not enough.

“The large number of visitors to Eaton Canyon this weekend have made it evident that many people are not practicing key requirements and recommendations set forth by Public Health … such as wearing face coverings, physical distancing and avoiding crowded areas,” the department said, according to the affiliate.

More than half of states investigating coronavirus-related illness

Meanwhile, officials in at least 26 states are also investigating hundreds of cases of multisystem inflammatory syndrome in children, a condition doctors believe is linked to coronavirus.

A CNN survey of health departments across the country identified more than 350 confirmed and potential cases of the syndrome — nearly half of which are in New York.

Last week, doctors said children who may have the syndrome need immediate attention and will probably need to be hospitalized immediately.

Symptoms do not look like the classic symptoms of coronavirus and may mostly include stomach pain and vomiting, along with fever and perhaps a rash, the experts told other doctors during a meeting last week organized by the CDC.

The syndrome appears to develop two to six weeks after infection with coronavirus and affects mostly children who were perfectly healthy beforehand.