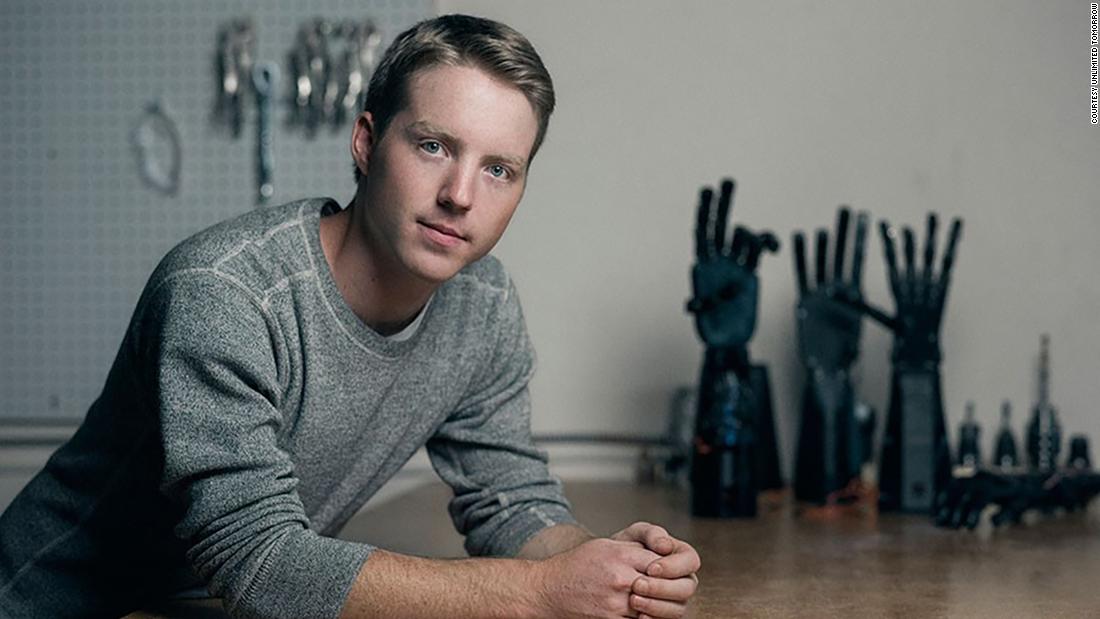 Today, he’s the founder of Unlimited Tomorrow, a company that designs low-cost, 3D printed prosthetic limbs that can be operated with the mind.

It was a chance encounter in the eighth grade that set him on the path to entrepreneurship, LaChappelle says. At a science fair, he met a 7-year-old girl who had an $80,000 prosthetic arm that he described as “archaic” and offered very little help with her physical needs.

“I was shocked to learn how much it costs, especially realizing that she would soon outgrow it and it would become useless at that point,” LaChappelle, now 24, told CNN.

“I couldn’t believe this was the best thing available for her, and that’s when I decided to find out how I can create something that provides physical utility.”

A prosthetic arm, for instance, should help someone complete daily tasks, like eating with utensils or tying shoes laces, he said. Through its appearance, it could also provide “psychological utility,” he added, emphasizing the importance of his device’s aesthetic.

It wasn’t long before LaChappelle’s interest in robotics and prostheses intensified from a hobby to a passion, and ultimately a mission.

Through high school, he learned all he could about the technology, and at 17 designed a robotic prosthetic arm that led him to the White House Science Fair, where he used it to shake hands with then President Barack Obama.

After graduating high school, LaChappelle was too preoccupied with his mission to enroll in college. Instead, he launched Unlimited Tomorrow, where he developed its flagship product TrueLimb.

The prosthetic arm, which looks and feels very real, uses sensors to read muscles at high resolutions and can be controlled with the mind.

“Our device is controlled using muscles within the residual limb. Some of our sockets might have over 20 muscle sensors within it. Our control system is built around the brain being the main processor instead of trying to replicate it and make assumptions,” LaChappelle said.

“After enough training, you start to focus on hand movement instead of muscle movement… we decipher the user’s intent and translate that into hand movements.”

The prosthetic is customized to match the user’s shape, size and skin tone. The limb feels like skin, and the fingers fold the way a human hand does. It even features veins, wrinkles and fingernails that can be painted.

One of the appealing aspects of TrueLimb is that it can be ordered without an in-person fitting. Unlimited Tomorrow sends clients a 3D scanner, which they use to scan their limbs. Within weeks, they receive a number of customized test sockets before ordering the final device.

For users, like Natasha Castrejon, it’s a dream come true. The 9-year-old’s story, highlighted on Unlimited Tomorrow’s website, says she sought TrueLimb to help her pursue interests in violin and Ninja Warrior-style gymnastics.

“It’s hard to find the words to describe how it feels,” LaChappelle said. “The first time someone ever used my device was extremely emotional for me. Their parent’s reaction also caught me off guard and gave me all the motivation in the world to continue my work. Now I’ve gotten to witness that moment many, many times and it doesn’t stop getting that emotional.”

Many amputees who don’t use prosthetic limbs forgo them due to their limited use and high price, LaChappelle said. That’s why it was important to him to create a high-functioning limb that was as affordable as possible.

TrueLimb costs $8,000, a fraction of what most prosthetic limbs cost. There’s also an affordable upgrade program that allows users who outgrow their limbs to receive another at half the price.