These US states have tamed coronavirus, even after reopening. Here’s how they’re doing it, and why they can’t let up 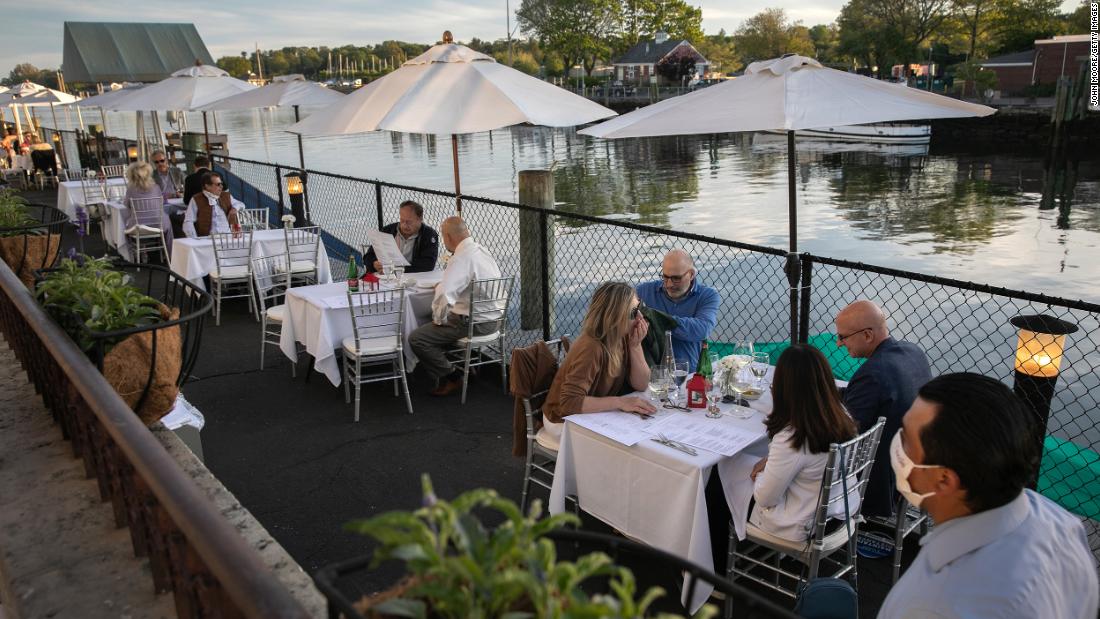 That was March. Three months later, the state had “done a full 180, from worst to first,” Gov. Andrew Cuomo said.

Now, the rates of infection, hospitalizations or deaths have plummeted in New York and several other states — paving the way for full economic reopenings.

Here’s how some states have helped get coronavirus under control — and what they’re doing to make sure it stays that way:

How much the state has improved:

Connecticut has consistently had one of the lowest rates of transmission (R numbers) of any state in the country. An R number represents how many people each infected person is likely to go on and infect, on average.

Connecticut has an R number of about 0.90. That means fewer and fewer people are getting infected in the state.

And the number of new deaths has plummeted since April 26, when the seven-day average of daily deaths was 113. That number has stayed below 5 every day since July 2, according to data from Johns Hopkins University.

How they tried to get their numbers down:

Many other states didn’t start requiring masks until two months later.
It also reopened later than many states, starting on May 20.
And like New York and New Jersey, Connecticut has required visitors from states with high rates of Covid-19 to quarantine for 14 days

How they’re planning to keep a lid on the virus:

Even though Connecticut had some of the best numbers in the nation, Gov. Ned Lamont decided not to move forward with Phase 3 reopening plans on July 6. That meant bars will remain closed, and restaurants must stay at 50% capacity.

“Look, I like a beer at the bar as much as the next person. I know how frustrating this can be,” Lamont said. “But right now, with this pandemic flaring up in a majority of other states, this is not the time to take a risk.”

Lamont also said the state would hold off on allowing outdoor gatherings of more than 100 people.

CDC director: The ‘most powerful weapon’ against Covid-19 is social distancing

How much the state improved:

New York started Phase 2 of its reopening on May 29, allowing office-based work, in-store retail shopping and some barbershop services to resume in much of the state.

And between May 29 and July 10, average daily new cases in New York state has dropped about 55% — from about 1,447 new cases a day to 651 cases a day, according to data from Johns Hopkins.

New York has by far the most Covid-19 deaths in the country, with more than 32,000 since the pandemic began.
On Monday, New York City reported no new deaths from Covid-19 for the first time in months.

What New York state did:

On March 20, as Covid-19 was spiraling out of control in New York, Gov. Andrew Cuomo announced all employees of nonessential businesses must stay home. It was one of the earliest shutdown mandates in the country.

“If someone is unhappy, if somebody wants to blame someone, or complain about someone, blame me. There is no one else who is responsible for this decision,” Cuomo said that day. “This is not life as usual. And accept it and realize it and deal with it.”

And at a time when testing was scarce across the country, New York tried to ramp up capabilities on its own. With FDA approval, New York state announced on March 13 it could authorize 28 public and private labs to start testing for coronavirus — the first state to do so.

New Yorkers tuned into Cuomo’s daily briefings for updates on the virus and how to stay safe. During his 111th and final daily briefing on June 19, Cuomo said the state had gone “from worst to first.”

He credited residents who followed guidance, stayed home, and wore masks when they had to go out in public.

“This wasn’t only about what government did. This was about what people did,” Cuomo said. “Together, New Yorkers bent the curve because we acted responsibly and we looked out for each other. Now we must stay the course.”

How they’re planning to stay the course:

As a popular tourist destination, New York is trying to prevent visitors from spreading the virus. So anyone coming from a state where coronavirus is surging must quarantine for 14 days upon arrival.

As of Tuesday, 22 states were on that travel advisory. Those arriving at a New York airport must fill out a traveler form.

“Travelers who leave the airport without completing the form will be subject to a $2,000 fine and may be brought to a hearing and ordered to complete mandatory quarantine,” the governor’s office said.

New York also released concrete metrics for when to allow schools to reopen, and when classes would need to go virtual if the situation gets worse.
While some have accused Cuomo of prematurely taking a victory lap, the governor’s website stresses the fight is not over:
“Coronavirus is still active in New York,” the top of the website reads. “We have to be smart. Wear a mask and maintain 6 feet distance in public.”

How much the state improved:

Massachusetts started reopening on May 25. But since then, the rate of new cases has gone down, not up.

Between May 25 and July 10, the rate of daily new cases in Massachusetts has dropped by 75%, according to data from Johns Hopkins University.

Between April 15 and July 14, Covid-19 hospitalizations have dropped by about 84%, and the rate of new deaths has dropped by about 95%, according to data from the Massachusetts Department of Health.

How they helped quell coronavirus:

Massachusetts waited to start reopening and was one of the last states to do so.
It also enacted a mask mandate before most other states did, on May 6. But unlike some states, the mandate in Massachusetts also applies to outdoor public areas where it might not be possible to stay 6 feet away from others.

How they’re planning to keep Covid-19 under control:

Massachusetts is doubling down on testing to try to snuff out coronavirus in the state.

This month, Gov. Charlie Baker announced a “Stop the Spread” testing initiative that will last until mid-August.

The effort will focus on eight communities where the rates of Covid-19 are higher than the statewide average.

“The goal of this initiative is to provide widespread asymptomatic testing in an easy-to-access location within these communities” to help stop community spread, Baker said.

And Massachusetts is aiming to resume classroom education this fall — but with face masks and distancing rules.
“Students in grade 2 and above are required to wear a mask/face covering that covers their nose and mouth,” according to initial guidance from the state education department. The same applies to teachers and staff members.

For those unable to wear a mask, face shields may be used. And mask breaks should occur throughout the day if there’s adequate distancing or ventilation.

How the state has improved:

New Jersey was hit hard early in this pandemic, with hospitalizations and deaths soaring. The state has the highest rate of Covid-19 deaths per capita: 175 per 100,000 people.

But now, New Jersey is among just a handful of states on track to contain Covid-19, according to CovidActNow.org, which tracks each state in four key areas: the infection rate, the test positivity rate, hospital capacity and contact tracing ability.
While testing has increased, the rate of new cases has decreased. New Jersey now has a test positivity rate of about 1.3%.
And the rate of transmission (Rt) is about 0.91, which means fewer and fewer people are getting infected.

— The closure of all schools and universities starting on March 18

— The closure of all casinos, racetracks, theaters and gyms

— The closure of all nonessential retail, recreational and entertainment businesses after 8 p.m. each day

New Jersey was the first state to issue a mask mandate, back on April 8.

Businesses must provide masks to employees and deny entry to any customer who refuse to wear them inside the business. Those riding public transit in the state must also wear face masks.

New Jersey also joined forces with New York and Connecticut on requiring visitors from hot-spot states to quarantine for 14 days.

How New Jersey is trying to keep Covid-19 under control:

Officials are urging residents not to get complacent just because the numbers have improved.

“Our rate of transmission is in a good place today, but only a week ago … it was above 1.0,” the governor said Monday.

How well the state is doing:

Vermont has the lowest test positivity rate in the nation — 0.78% as of Wednesday, according to Johns Hopkins University.
It also has the 3rd lowest number of coronavirus cases per capita and the 10th lowest Covid-19 death rate of any state.

How they helped keep their numbers low:

As of last week, “2,469 contacts have been identified,” the Vermont Department of Health said.

“172 contacts became a COVID-19 case. This means that this group of people knew to stay home, and likely did not spread the virus further.”

How they’re planning to keep Covid-19 under control:

When schools reopen this fall, “All staff and students are required to wear facial coverings while in the building, as well as outside where physical distancing cannot be maintained,” according to guidance issued last month by state health and education officials. That guidance could change before the school year starts.

And despite having the lowest test positivity rate in the country, Vermont’s state of emergency will be extended for another month, Gov. Phil Scott announced Tuesday.

“It’s the vehicle we need to keep certain protections in place (and) control outbreaks as they come up, so we can keep the economy open and manage this ongoing crisis,” Scott said.

“As long as the data stays consistent, we will stick with our effort to incrementally lift restrictions and get closer to a point where this order is no longer necessary.”