‘There has to be hope’: CNN Hero delivers necessities and positivity to young people with disabilities in Colombia 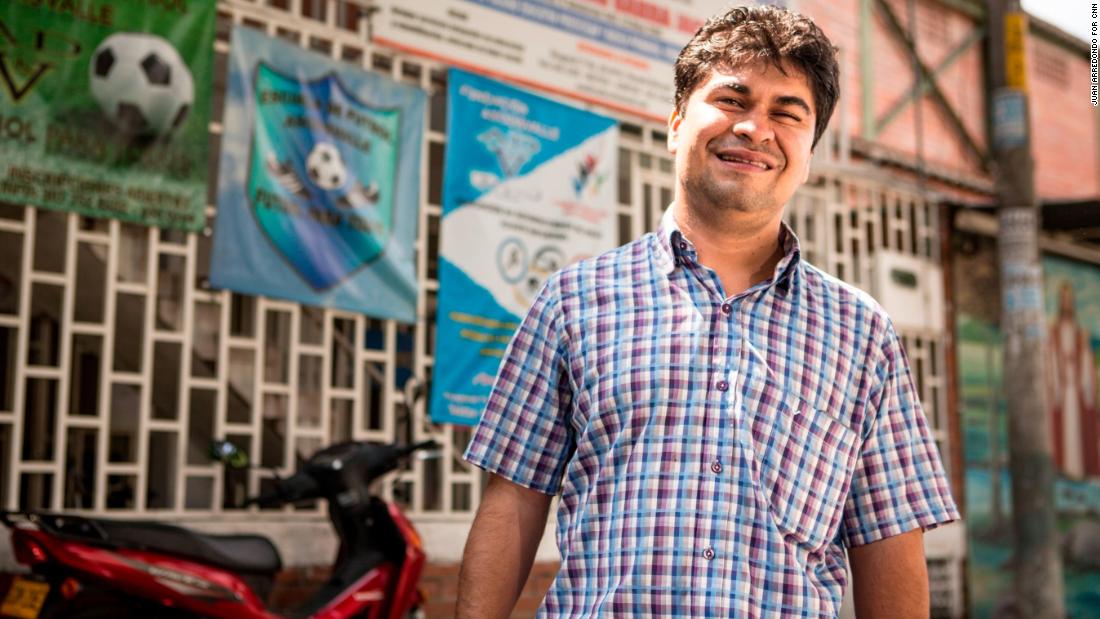 As a young man with cerebral palsy, Aristizábal has fought his entire life to overcome the obstacles in his way.

Today, his non-profit, ASODISVALLE — an acronym that translates to Association of Disabled People of the Valley — offers a range of services that have helped transform the lives of more than 1,100 young people and their families. Aristizábal was the CNN Hero of the Year in 2016.
In Colombia, there have been more than 165,000 confirmed cases of Covid-19. More than 6,000 people have died. The numbers continue to rise rapidly, threatening the livelihood of Colombians who are on a countrywide quarantine until at least August 1.

“We’ve been taking all the safety measures to avoid affecting our health and the health of others,” said Aristizábal, 37.

Normally, his organization runs a school and medical clinic and provides speech, physical, and occupational therapy. The group also has a meal program and a job training initiative.

To ensure everyone’s safety, the organization temporarily closed its center and ceased in-person classes. But Aristizábal and his team quickly put remote learning into action.

They are also providing in-home and virtual medical treatment and physiotherapy.

“They won’t be able to have the same things that they had here at the foundation,” Aristizábal said, “but we’re making the effort so that the children’s situation doesn’t worsen.”

Ultimately, he hopes their efforts inspire the community to stay positive and overcome the challenges facing them.

“It’s important to give the best of ourselves in these moments,” he said. “If we set our hope and we set our will, we can rise above all the adversities.”

CNN’s Laura Klairmont spoke with Aristizábal about his recent work. Below is an edited, translated version of their conversation.

CNN: How has the Covid-19 situation in Cali affected the families in your program?

Jeison Aristizábal: The infections started in the area where there are more people with economic power, people who travel. and then has increased in the Aguablanca district, where we run our foundation.

Many of our foundation families are among the people who do cleaning, delivery service, maintenance. Many of them can’t stay totally quarantined because they live day to day; they are humble families that need to work to get food. We’ve had infections within some families with children in the foundation. We unfortunately found out about the death of a father of a child in the program.

Obviously, to the extent in which the pandemic continues, we will continue with the quarantine. The hospital infrastructure in Colombia is a lot smaller and more precarious. A wave of mass infections and hospitalized people — the hospital system in Cali wouldn’t be able to withstand that.

CNN: What are some of the issues facing the kids in your program right now?

Aristizábal: What most concerns me is I want to guarantee that they have a good diet. The children here at the foundation were given their breakfasts and lunches and they have a nutritionist to make sure they have a balanced diet filled with nutrients. If they lose their diet, their medical situation will get even more complicated. That’s why we’ve really worked (to get) the children’s groceries.

Another concern is accessing medical treatment and therapies. Unfortunately, the children haven’t been able to return to the center, which for them is grave because many of them depend on their treatments to maintain their state of health. For children with disabilities, physiotherapy is especially important. We’ve really done a huge effort so they can continue receiving (those) from home.

The emotional and psychological part has really affected them. The prolonged confinement due to the isolation has caused more stress to these children. They really, really miss the foundation; this is their second home.

CNN: How is your group supporting the children and families in your program?

Aristizábal: We’ve managed to provide groceries every two weeks to each family. We’ve had success with the families having a permanent food supply.

We have two ways of providing (physiotherapy) to the kids now. The medical providers go from home to home to give the therapies. The physiotherapist also shows the family how to do the therapy at home. We have another really nice sports program for people with disabilities. So, via the internet, we have (those) classes, which end up being therapy — so that they can move their arms, their hands, and not relapse after everything we’ve gained.

We’re doing all our school programs through virtual classes so they can study in their homes. We’ve also been teaching them to make bread via the internet. We’re giving psychological support. The psychologists from the foundation make phone calls to the families and are providing emotional support for each one of the children.

We’ve done all of this to guarantee that the children’s health conditions don’t worsen due to this quarantine.

CNN: What advice do you have for people during this difficult time?

Aristizábal: The message of not losing hope is fundamental in these moments. Because many people have lost their jobs, have lost a life that we call normal, now we’re thinking that it’s all bad. And it’s not — it’s telling them there has to be hope because that’s what permits us to get up with optimism, with the will to fight so that things get better every day, despite the changes that we’re living.

In the end, when we have dreams, that’s a motor that ignites life. It’s not an easy situation, but you have to put in the effort and a lot of desire to move forward — and have solidarity and heart. Put the effort into life, our dreams, everything we’re doing. That is the great message that we’ve carried to families, to the children and the entire community.

Want to get involved? Check out the ASODISVALLE website and see how to help.