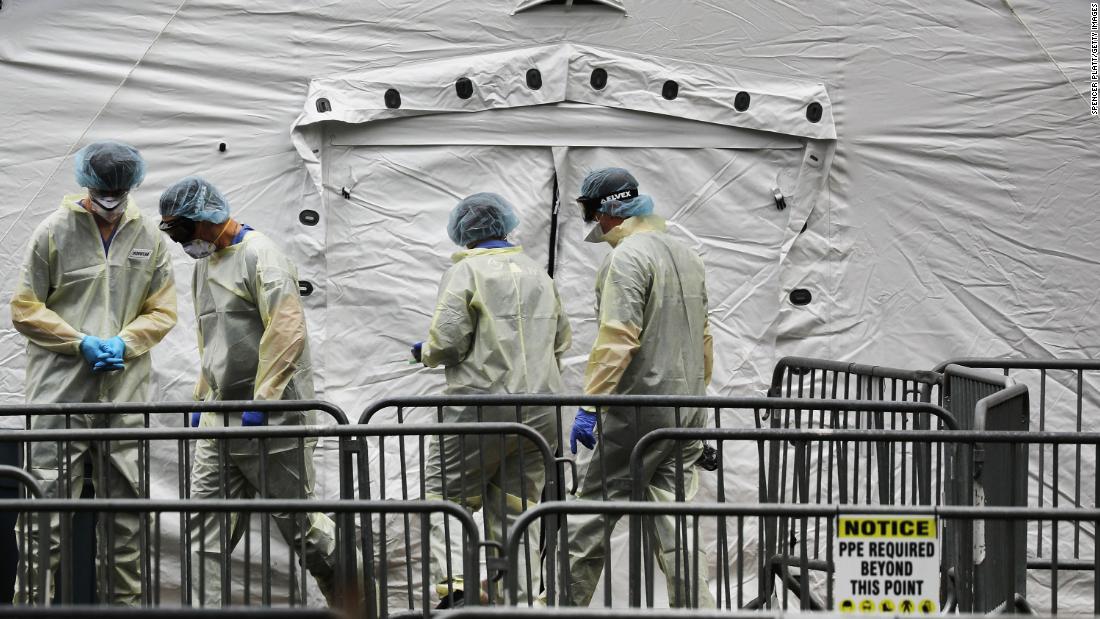 With 1,344 new deaths reported Saturday, the US had the most fatalities recorded in one day.

The big test will come in the next few days, said Dr. Deborah Birx, the White House coronavirus response coordinator.

“The next two weeks are extraordinarily important,” Birx said. “This is the moment to not be going to the grocery store, not going to the pharmacy, but doing everything you can to keep your family and your friends safe, and that means everybody doing the six feet distancing, washing your hands.”

Social distancing measures already appear to be paying off in Washington state, Dr. Anthony Fauci of the National Institute for Allergy and Infectious Diseases said, calling the measure “our most important tool.”
State-by-state coronavirus cases

A struggle many states are facing in the effort to understand and combat the virus is inaccessible testing.

Illinois Gov. J.B. Pritzker said his state doesn’t even have enough tests to get a clear idea of the scale of the outbreak.

“Everything about the tests are very difficult to come by, and there’s no federal plan for this, so every state is on their own,” Pritzker said. “As I’ve said, it’s the Wild West out here.”

California, one of the hotspots of the outbreak, has been working to increase the number of its residents that have been tested, which stands now at more than 126,000, Gov. Gavin Newsom said.

“That testing number may sound high to some. It is low to many others and certainly to me,” Newsom said in a news conference on Saturday.

States see the impact not even halfway through

Several states have reported jumps in cases, including Louisiana, where there were nearly 12,500 cases — a 21% increase — and more than 400 deaths Saturday, according to the state health department.

“Look at the magnitude of this. We are still very much in this,” Dr. Joseph Kanter, assistant state health officer for the department, said in a news conference. “In fact we haven’t even hit halfway.”

New Jersey had its second day in a row of more than 4,000 positive cases reported. The state has lost nearly 100 more of its residents to coronavirus than it did in 9/11, according to New Jersey Gov. Phil Murphy.

“This pandemic is writing one of the greatest tragedies in our state’s history,” Murphy said.

The state has yet to reach the peak of its curve, Cuomo told reporters, saying projections forecast the apex is between four and eight days away. At that point, New York’s health care system will face its “ultimate challenge,” Cuomo said.

A battle to stop the spread

Growing cases continue to put pressure on facilities, staff and resources. But officials are finding ways to address those needs.

Cuomo said he will sign an executive order to allow medical students who have yet to graduate to begin practicing. In all, the state has 85,000 medical volunteers, he said, including 22,000 from out of state.

And other states — and even another nation — has rallied to remedy dwindling supplies in New York.

New York state, which has been desperately searching for ventilators, will receive 140 ventilators from Oregon, Cuomo said Saturday in a news conference.

“This was unsolicited, but the 140 ventilators will make a difference,” Cuomo said, adding the gesture was both “kind” and “smart.” Kentucky Gov. Andy Beshear has called on residents to donate equipment they may have.

“We’re all in the same battle here,” the governor said. “And the battle is stopping the spread of the virus.”