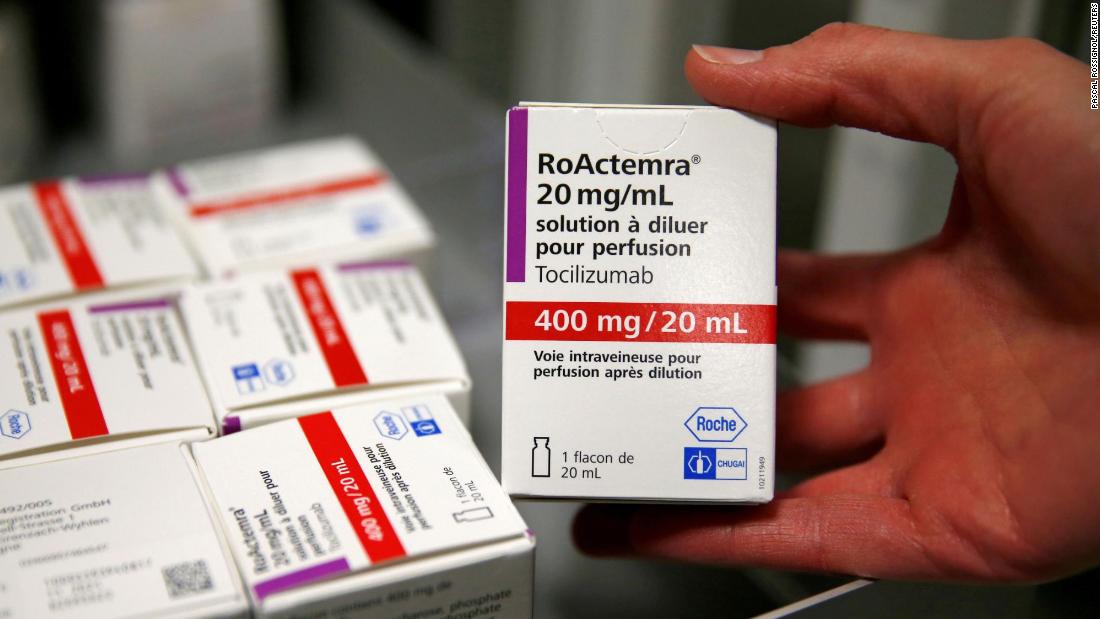 The Virginia woman says she and her whole family got the vaccine as soon as it was available. She’s immunocompromised and susceptible to getting really sick if she caught Covid-19. She has lupus and rheumatoid arthritis and it is these diseases that add an extra layer to her frustration and anger.

To keep her rheumatoid arthritis symptoms under control, to be able to function every day, once a month she gets an infusion of a biologic called Actemra, also known as tocilizumab. But now, because of the pandemic and the recent surge in cases, there is no Actemra available

“We did our part to preserve ourselves, our community, in trying to help battle this by getting vaccinated,” Melendez said. “It’s just unfortunate that the ignorance and laziness, for lack of better words, of other people who avoided taking the vaccine and ended up in the hospital with Covid, now has to impact me.”

In June, the US Food and Drug Administration gave Actemra an emergency use authorization to treat hospitalized Covid-19 patients. This monoclonal antibody can reduce inflammation that can make patients sicker.

The antibody treatment blocks an inflammatory protein called IL-6 that causes damage in rheumatoid arthritis. That same protein plays a role in some of the serious symptoms in people with severe Covid-19 infections.

The latest surge in cases caused a global shortage. Genentech, the company that makes Actemra, doesn’t have enough for everyone who needs it. Last week, the company said demand for the drug went up more than 400% beyond pre-Covid levels in just two weeks.

In the United States, supplies of several dose levels of this medicine have been out of stock since last Monday.

A life saver and life changer

“It has restored my ability to have a fully functioning life,” Melendez said. “Before it, it was so bad that simple things like brushing my teeth, combing my hair, opening a bottle of water, unfastening a pair of jeans, going to a restaurant, feeding myself were all challenges. Standing up and walking was hard. That’s how bad my RA gets and I’m only 47.”

Without the medication, even for a month, people can suffer debilitating flare-ups.

“There are thousands of patients who take monthly Actemra to help their inflammatory diseases,” said Dr. Marcus Snow, chair of the committee on Rheumatic Care at the American College of Rheumatology, who works at the University of Nebraska Medical Center. “The people who need these medicines have been through significant trials and tribulations to get to the point where they need these medicines, and to all of a sudden have a shortage is terrifying for a lot of people.”
Steven Taylor, the executive vice president of mission and strategic initiatives for the Arthritis Foundation, said that while there are other drugs available, they aren’t easily interchangeable.

“It isn’t easy to switch drugs, especially when you’re on a serious drug like Actemra,” Taylor said. “You surely don’t want to be bouncing around.”

The American College of Rheumatology said it has received “a number” of emails from concerned members. The organization sent out a notice about the shortage last week, as did the Arthritis Foundation.

On Thursday, Genentech sent a notice to customers saying it was “working as urgently as possible to expedite replenishments and increase manufacturing capacity and supply wherever possible.”

The company said the medicine should be available for distribution starting Monday, August 30, but “given continued tight supply, Genentech anticipates additional intermittent periods of stockouts in the months ahead if the pandemic continues at the current pace.”

A subcutaneous injectible form of Actemra that has not been authorized to treat Covid-19 is still available for patients with rheumatoid arthritis. Snow suggested patients ask their doctors about it. It’s unclear if insurance would cover it.

And for hospitalized Covid-19 patients, there are some alternatives if Actemra is not available.

The World Health Organization recommended in June that Actemra be used to treat Covid-19 patients. Worried for them now, it has called for Roche, the parent company of Genetech, to ensure there was equitable allocation of current stocks for all countries.

“We also strongly encourage Roche to facilitate technology transfer and knowledge and data sharing to broaden access to this important treatment,” the WHO said in its statement.

Roche, Genentech’s parent company, said it would not enforce its patents in low- and middle-income countries during the pandemic so more companies can make the medicine. Doctors Without Borders complained this was not enough. It had argued the drug is “inaccessible and unaffordable for the majority of the world.”

This is not the first shortage in the pandemic. Supply chains were disrupted when factories had to shut down to prevent the spread of the virus, and Covid-19 put a real demand shock on top of a system that was already fragile, according to Erin Fox, an expert on drug shortages who works as a senior director, drug information and support services at University of Utah Health.

“All it takes is a little spike in demand and we have problems,” Fox said.

Because of the uncertainty of surges, some facilities also hoarded some medication. Genentech recently said it would not take orders back, and that should cut down on hoarding, Fox said.

The way pharmaceutical companies typically operate can also cause problems, according to Michael Ganio, the senior director of pharmacy practice and quality at American Society of Health System Pharmacists.

“The same as any other manufacturer, they’re going to make enough for what they think they need for the year. Nobody wants to have extra inventory sitting around,” Ganio said.

Ganio said the American Society of Health System Pharmacists has also heard reports of shortages of in-line filters that are used with IV bags. There’s been more demand for them due to the increasing use of the Regeneron antibody cocktail used to treat people with Covid-19.

Some electrolyte products have also been in chronic shortage, he said.
Even before the pandemic, drug shortages have been considered a “real challenge for public health” according to the FDA, and it’s been going on for decades.
There are currently at least 110 drugs in shortage according to the FDA. The American Society of Health System Pharmacists counts 183.

“It’s very frustrating. In shortage after shortage after shortage the manufacturer does not have a plan for when they can’t supply product. It’s often ‘good luck, we’re out,’ ” Fox said. “All decisions are made about the business first and unfortunately, there’s no requirement to make anything, no matter how life saving it is.”

In its 2020 report to congress, the FDA said that it is “doing everything within its authority to help prevent and alleviate” disruptions and shortages and worked with manufacturers to prevent 199 shortages, but for now that doesn’t help patients like Melendez.

“I know I can’t be the only person who’s sitting here today on edge,” Melendez said. “I want to make sure they don’t forget about us.”