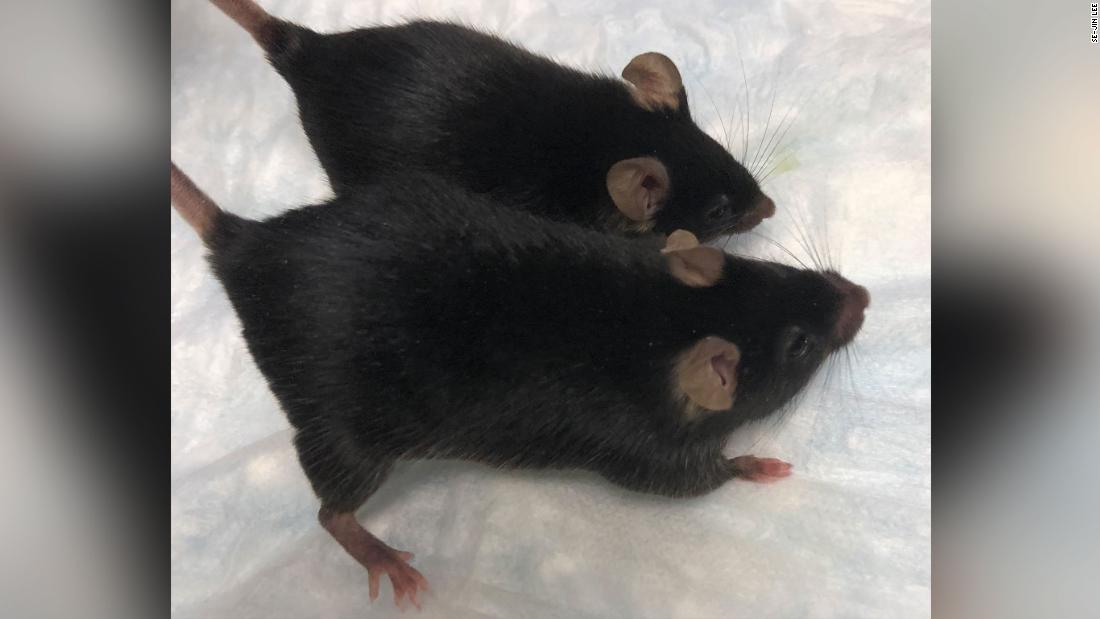 The new study also revealed this treatment promoted the recovery of muscle and bone mass once the mice returned to Earth.

The results are promising to researchers because they could be used to develop therapies that might help astronauts mitigate the muscle and bone loss they experience during long-term spaceflight.

Targeting this pathway could also be used to help people on Earth who experience muscle and bone loss due to various conditions such as muscular dystrophy, osteoporosis and diseases that cause muscle wasting like cancer, heart disease, sepsis and AIDS.

The 40 female mice, provided by the nonprofit Jackson Laboratory in Maine, were genetically manipulated for muscle growth in an experiment to better understand how zero gravity affects the human body.
They launched and arrived at the space station in December and splashed down in a SpaceX Dragon capsule on January 7 in the Pacific Ocean.

The SpaceX cargo vehicles are unique in that they can bring new materials and experiments to the space station and return to Earth 30 days later. This means that samples can be returned to the ground in a timely manner, which enabled the live mice to be returned to Earth, said Morgan, who also serves as an emergency physician with the US Army.

These mice are just one of many groups of rodents that have flown on the space station over the years in the name of research.

The experiment was called Rodent Research-19, and it was used to study both myostation and activin, which are the molecular signaling pathways that can influence and regulate bone density and skeletal muscle mass, according to NASA. These pathways, researchers believe, could be targets to prevent muscle and bone loss during missions and help with recovery efforts once astronauts return to Earth.

While on the space station, some of the mice were treated with an agent, the ACVR2B receptor, that actually blocked the pathways to see how it impacted their bone and muscle loss. Blocking these pathways has also been known to induce muscle and bone growth.

Because some of these mice were genetically engineered to lack myostatin, they had twice the average muscle mass — hence, the nickname “mighty mice.”

The mice who flew on the space station were compared with a control group of 40 female mice who remained on Earth.

“Mice that were hypermuscular as a result of having a mutation in the myostatin gene were able to retain most, if not all, of that extra muscle during spaceflight,” said study authors Se-Jin Lee and Emily L. Germain-Lee in an email.

“These findings show that blocking the activities of these hormones does work to enhance both muscle and bone even when mice are unable to bear weight.”

“One thing that we found somewhat surprising is how resilient mice are even when subjected to all of the stresses associated with space travel,” they said. “We knew that mice had been sent to space in the past, but we still found it remarkable that after spending a month at the ISS, they seemed to resume normal activity very quickly after returning to Earth.”

Astronauts on the space station exercise every day to mitigate muscle and bone loss, but experiments like this can help scientists understand how the loss occurs and establish better ways to manage it.

The exercise countermeasures astronauts use, which include two hours of resistance training and cardiovascular workouts, may not always be possible during long-term spaceflight.

“The potential for a drug treatment that could prevent (bone and muscle loss) shows a lot of promise in long-duration spaceflight,” Morgan said.

But there are potential side effects that need to be considered and understood, the researchers said.

“Although myostatin’s major role is to regulate muscle growth, a drug that targets other hormones besides just myostatin can affect other tissues besides muscle,” the researchers said.

The doctors cited an example including Acceleron, a biotechnology company, which used its version of this receptor in clinical trials to treat patients with Duchenne muscular dystrophy. Some of the patients experienced nosebleeds, but the reason for that is not entirely understood. But it sheds light on the fact that these receptors can block other things beyond myostatin.

“The challenge moving forward will be to understand the reasons for this and other effects with the goal of figuring out how to modify these drugs to avoid such problems,” the researchers said.

The study has revealed new questions for the researchers. Going forward, they want to better understand the changes caused by microgravity in blood, muscle and bone. They also want to consider how to conduct further investigation on a future space mission.

“Our hope is that this could be used both for astronauts during extended space travel and for people on Earth suffering from muscle and bone loss,” the doctors said. “There is still a lot of work that would need to be done in this regard, but we believe that this type of strategy holds promise.

“We would like to focus on figuring out ways to engineer better drug candidates that might avoid some of the potential side effects. Only by understanding the underlying science will we be able to try to translate this work into new medical treatments.”

Astronauts themselves are also the basis for understanding how the space environment can affect humans.

Koch and Morgan both participated in extended stays on the station, with Koch spending 11 months aboard and Morgan staying for nine months. Currently, astronauts typically spend about six months on the space station, but some like Scott Kelly have stayed for nearly a year to test how the human body reacts to long-term spaceflght.

These health studies could be applied to future long-term spaceflight as NASA looks ahead with the Artemis program, which aims to return humans to the moon in 2024 and could eventually land them on Mars.