Tear gas: What it is, its effects, and what to do if you’ve been exposed 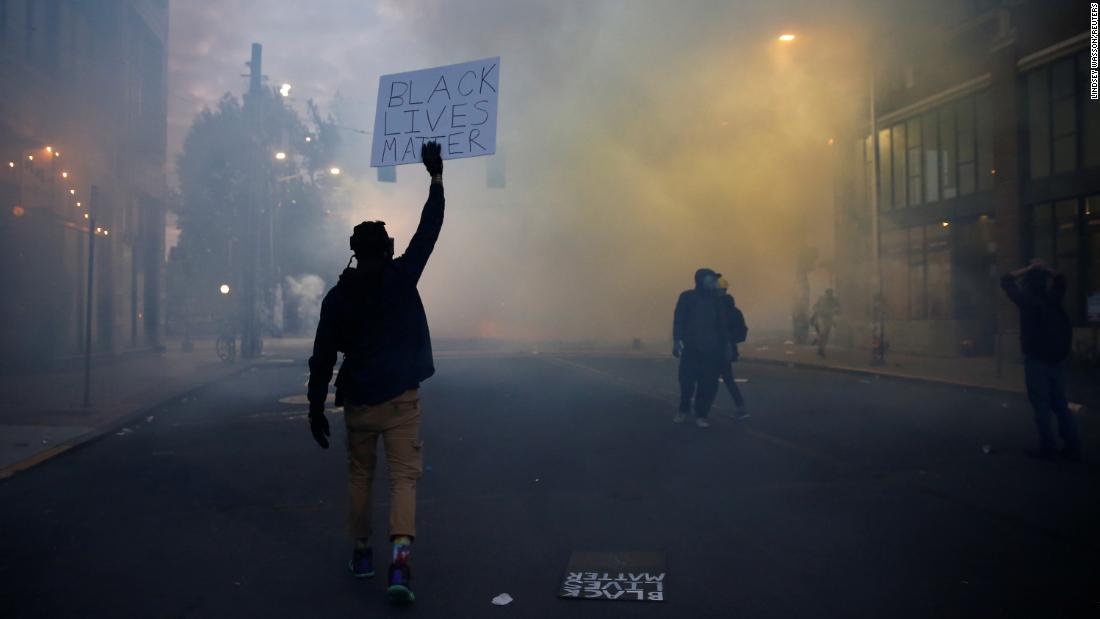 An anthropologist in her early 20s who studies social movements, she was among those in the crowd chatting with friends around 8:30 p.m., shortly before the city’s 9 p.m. curfew.

Protesters in the front line shouted to the police, “Take a knee! Take a knee!” The crowd erupted in applause and cheers as officers kneeled, a gesture of solidarity with protesters concerned about police brutality.

A few minutes later, however, officers were seen donning gas masks. Then someone threw a lit firecracker behind the police line, and it exploded colorfully.

Then large groups of protesters sprinted away and Sam felt acute panic and the all-out assault on her senses as tear gas reached her group about 50 yards from police.

The chemical agent burned her eyes and throat, and inhaling it felt more alarming than swallowing a jalapeno. “It’s more of a panic than anything else,” she said. “Every time you open your eyes it feels like there’s lemon juice in them.”

Tear gas and its symptoms

Tear gas is being used to disperse protests around the United States ignited by the death of George Floyd and now focused on opposing police brutality.

The two most common riot control agents are chloroacetophenone (CN) and chlorobenzylidenemalononitrile (CS), according to the US Centers for Disease Control and Prevention.

What’s called tear gas actually comes in a powdery solid form, rather than a gaseous state. Commonly known by their initials, CN and CS are deployed as tear gas when the pressurized powder is mixed into a liquid formulation that is then released into the air.

Tear gas is a banned substance listed in the 1993 International Chemical Weapons Convention. The Geneva Convention, however, does not cover its use against rioting civilians.

It’s a nonlethal compound that has been used in the US since the 1950s, according to a 2016 paper in the Annals of New York Academy of Sciences.

If it reaches your eyes, tear gas can cause excessive tearing, burning or blurred vision, according to the CDC.

The irritant can cause a runny nose, as well as a burning sensation inside the nose. It can also cause difficulty swallowing as well as chest tightness, coughing, shortness of breath and a feeling of choking.

For those who are exposed to riot control agents at close proximity or in a closed in space, there can be more long-term effects including blindness, glaucoma or respiratory failure, the CDC says.

An experienced pastor suits up

Douša has been at this a long time and knows to prepare for the worst during a protest.

Her protective uniform includes goggles and a face shield to help protect against tear gas. She wears a surgical mask as an extra protective layer against the gas reaching her mouth and throat. The mask is important, too, as a standard line of defense during the coronavirus pandemic.

“I’m just a pastor but it feels like I’m suiting up for war,” said Douša. “People I’ve been supporting have seen the tear gas and the violence.”

Douša has helped peaceful protesters by bailing them out of jail and accessing medical attention. She noted one instance in which a woman was shoved by a police officer, hit her head and had a serious seizure.

What to do if you’re exposed to tear gas

If you’re participating in a demonstration for the first time, you should be prepared for tear gas.

If it’s deployed, keep a level head, according to the Street Medic Guide, a document published by the Paper Revolution collective, which emerged from the Occupy Wall Street movement in early 2012.

After removing yourself or the affected person from danger, the handbook says that you can apply a liquid antacid and water mixture that includes is a 50/50 mixture of water and either magnesium hydroxide and aluminum hydroxide.

The Street Medic Guide recommends using milk if the first option isn’t available. Another option is a mixture of water and sodium bicarbonate (baking soda).

Baking soda is cheaper and easier to transport and store than refrigerated milk, and can be mixed with water wherever you are.

First aid and clean up

Sam, the young woman protesting in Atlanta, was prepared and used milk of magnesia. The commonly available laxative is an alkaline suspension, which means that it can neutralize acids, such as tear gas, when it comes in contact with them.

As soon as you’re able, it’s important to wash your skin with lots of soap and water.

After you’ve provided immediate first aid for tear gas, you should remove any article of clothing that may have tear gas on it. It’s better to cut it off rather than pull it off over your head, according to the CDC.

You should then place your exposed clothing in a plastic bag, seal the bag and then place that bag inside another plastic bag in order to prevent others from being exposed to the chemical, the public health agency says.

Douša, the Park Avenue Christian Church pastor, recommended a list of items to prepare yourself if tear gas is deployed to break up a peaceful protest or if an event becomes violent:

– Goggles: To prevent tear gas from getting into your eyes.
– Face shield: Another protection against tear gas for your eyes, nose, mouth, skin and lungs.
– Comfortable footwear: Marches and protests involve a lot of walking, and you’ll want to also be ready if you have to run.
– Bike helmets: To protect your head if objects are being thrown or someone hits you.
– An umbrella: A defense against rubber bullets.
– ID, health insurance and cash: If you need to go to the hospital, talk with police officers or have other incidental expenses.

This week at least 40 US cities have instituted curfews.

If you do decide to join a peaceful march or demonstration, remember that tear gas has been used even before the curfew rules have gone into effect. There are plenty of ways to express yourself or support marginalized groups without street protesting.

Those examples include, but certainly aren’t limited to, having a conversation with someone whose background differs from your own, calling your elected officials and donating time and money to organizations whose missions you support and voting.

Even for seasoned activists like Douša, however, the recent unrest surging across the country feels different, and so does the official response to it.