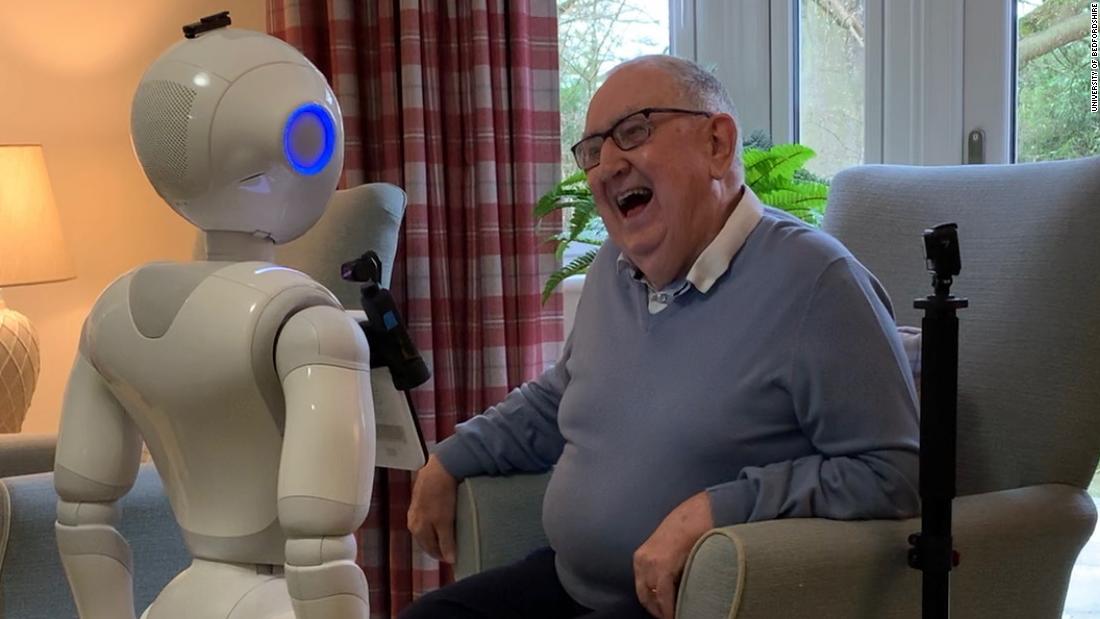 Pepper, a “culturally competent robot,” was tested on care home residents in Britain and Japan — those who interacted with it for up to 18 hours over the course of two weeks “saw a significant improvement in their mental health,” researchers found.
Pepper was part of a large global study known as CARESSES, jointly funded by the European Union and the Japanese government, which investigated the use of artificial intelligence (AI) in caring for the elderly.

The scientists behind the study also found that “after two weeks of using the system there was a small but positive impact on loneliness severity among users.”

Pepper is fully autonomous, meaning that it is not controlled by a person. The gadget, which features a tablet computer that can play music and entertainment, does not just ask and answer questions but can actually engage in and sustain conversation.

It has been designed to be “culturally competent,” meaning that it can respond to the culture-specific needs and preferences of older people.

Dr. Chris Papadopoulos, principal lecturer in public health at the UK’s University of Bedfordshire, was the lead author of the evaluation of the three-year project.

In an online statement, he described the study as “groundbreaking,” adding: “The results show that using the CARESSES artificial intelligence in robots such as Pepper has real potential benefit to a world that is witnessing more people living longer with fewer people to look after them.

“Poor mental health and loneliness are significant health concerns and we have demonstrated that robots can help alleviate these.”

The University of Bedfordshire, Middlesex University and Advinia Health Care are the UK partners of the study, coordinated by University of Genova in Italy, which developed the robot’s AI. Global researchers collaborated on the project with the robotics company SoftBank Robotics.

When they first embarked on the study in 2016, the team could not have foreseen the coronavirus pandemic, which has had a huge impact on elderly people in care homes worldwide.

“When we kicked off the project it was clear that loneliness in older adults was a really big problem that is increasing all the time and one that we were keen to tackle,” Papadopoulos told CNN. “Social care is incredibly stretched and we have an ageing society.”

“Of course we could never have predicted how relevant this issue has become today, where we have enforced isolation in many care homes and selective isolation for many others which has resulted in feelings of loneliness,” he said. “Our system really couldn’t have come at a better time to try and reduce some of those issues.”

So, could Pepper offer real help to the many millions of older people still unable to see their friends and family for fear of contagion?

“The project we developed has now rigorously demonstrated that the system we developed could and did improve mental health and wellbeing and reduce loneliness,” Papadopoulos said. “However it is just at a prototype level and there were many technical limitations.”

He estimated it would take a further two to three years of research, commercial development and funding before robots such as Pepper could actually be introduced to care homes.

“We really believe that this isn’t about replacing care — a robot can’t do what a human can do. But they can be a useful supplementary tool to help stimulate people’s mental health,” he said.

Dr Sanjeev Kanoria, surgeon, founder and chairman of Advinia Health Care — one of the largest providers of dementia care in the UK — said in a statement to CNN: “The robot was tested in Advinia’s care homes in the UK. Now we are working towards bringing the robot into routine care, so it can be of real help to older adults and their families.”

Vic Rayner, executive director at Britain’s National Care Forum, told CNN: “Whenever we think about technology in care, we need to be absolutely clear that what it does is enhance the care that is available and that it is understood and welcomed by those receiving care. This study gives us insight that robots can and do fulfil those criteria. It does, of course, challenge our understanding of care as a purely human to human interaction.”

“However, over recent years we have all had multiple challenges as citizens as to what role technology can play, and it is absolutely right that we are looking at all aspects of technological development and understanding when it is appropriate for them to be used in care,” Rayner added. “We need to ensure that care, and people who use care, are at the forefront of tech developers minds and, wherever possible, those receiving care are actively engaged in shaping that technological future.”