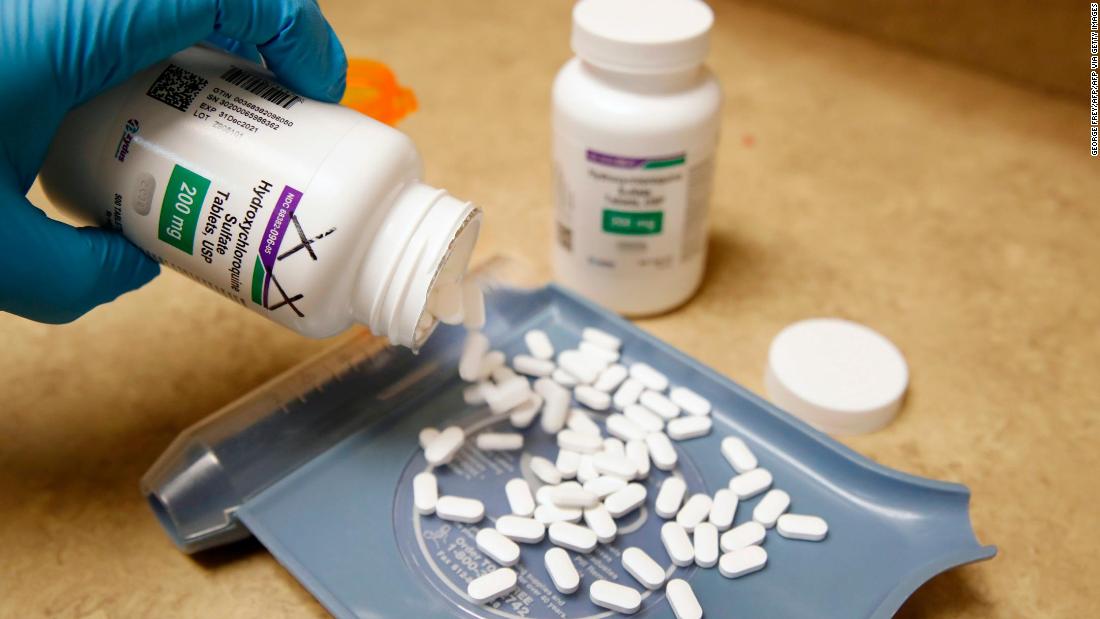 A team at Henry Ford Health System in Southeast Michigan said Thursday its study of 2,541 hospitalized patients found that those given hydroxychloroquine were much less likely to die.

Dr. Marcus Zervos, division head of infectious disease for Henry Ford Health System, said 26% of those not given hydroxychloroquine died, compared to 13% of those who got the drug. The team looked back at everyone treated in the hospital system since the first patient in March.

It’s a surprising finding because several other studies have found no benefit from hydroxychloroquine, a drug originally developed to treat and prevent malaria. President Donald Trump touted the drug heavily, but later studies found not only did patients not do better if they got the drug, they were more likely to suffer cardiac side effects.

The US Food and Drug Administration withdrew its emergency use authorization for the drug earlier this month and trials around the world, including trials sponsored by the World Health Organization and the National Institutes of Health, were halted.

“Our results do differ from some other studies,” Zervos told a news conference. “What we think was important in ours … is that patients were treated early. For hydroxychloroquine to have a benefit, it needs to begin before the patients begin to suffer some of the severe immune reactions that patients can have with Covid,” he added.

“The combination of hydroxychloroquine plus azithromycin was reserved for selected patients with severe COVID-19 and with minimal cardiac risk factors,” the team wrote.

The Henry Ford team said they believe their findings show hydroxychloroquine could be potentially useful as a treatment for coronavirus.

“It’s important to note that in the right settings, this potentially could be a lifesaver for patients,” Dr. Steven Kalkanis, CEO of the Henry Ford Medical Group, said at the news conference.

Kalkanis said that their findings do not necessarily contradict those of earlier studies. “We also want to make the point that just because our results differ from some others that may have been published, it doesn’t make those studies wrong or definitely a conflict. What it simply means is that by looking at the nuanced data of which patients actually benefited and when, we might be able to further unlock the code of how this disease works,” he said.

“Much more work needs to be done to elucidate what the final treatment plan should be for Covid-19,” Kalkanis added. “But we feel … that these are critically important results to add to the mix of how we move forward if there’s a second surge, and in relevant other parts of the world. Now we can help people combat this disease and to reduce the mortality rate.”

Researchers not involved with the study were critical. They noted that the Henry Ford team did not randomly treat patients but selected them for various treatments based on certain criteria.

“As the Henry Ford Health System became more experienced in treating patients with COVID-19, survival may have improved, regardless of the use of specific therapies,” Dr. Todd Lee of the Royal Victoria Hospital in Montreal, Canada, and colleagues wrote in a commentary in the same journal.
“Finally, concomitant steroid use in patients receiving hydroxychloroquine was more than double the non-treated group. This is relevant considering the recent RECOVERY trial that showed a mortality benefit with dexamethasone.” The steroid dexamethasone can reduce inflammation in seriously ill patients.

They wrote that in comparison, a study of patients at 25 New York hospitals started taking the drug “at any time during their hospitalization.”

But patients in that New York study, published in May in the Journal of the American Medical Association, started taking hydroxychloroquine on average one day after being hospitalized.

“Maybe there’s a little bit of a difference, but it’s not like patients in New York were being started on day seven. That’s not what happened,” said Eli Rosenberg, lead author of the New York study and an associate professor of epidemiology at the University at Albany School of Public Health.

Rosenberg also pointed out that the Detroit paper excluded 267 patients — nearly 10% of the study population — who had not yet been discharged from the hospital.

“There’s a little bit of loosey-goosiness here in all this,” he told CNN.

Both the Detroit and New York studies were observational: they looked back at how patients did when doctors prescribed hydroxychloroquine.

While helpful, observational studies are not as valuable as controlled clinical trials. Considered the gold standard in medicine, patients in a clinical trial are randomly assigned to take either the drug or a placebo, which is a treatment that does nothing. Doctors then follow the patients to see how they fare.

The US trial, run by the National Institutes of Health, enrolled more than 470 patients.

The UK trial, run by the University of Oxford, enrolled more than 11,000 patients.

“We have concluded that there is no beneficial effect of hydroxychloroquine in patients hospitalized with COVID-19,” the Oxford doctors concluded.

“This is a big deal,” he told CNN. “This medicine can literally save tens of thousands, perhaps hundreds of thousands of American lives and maybe millions of people worldwide.”