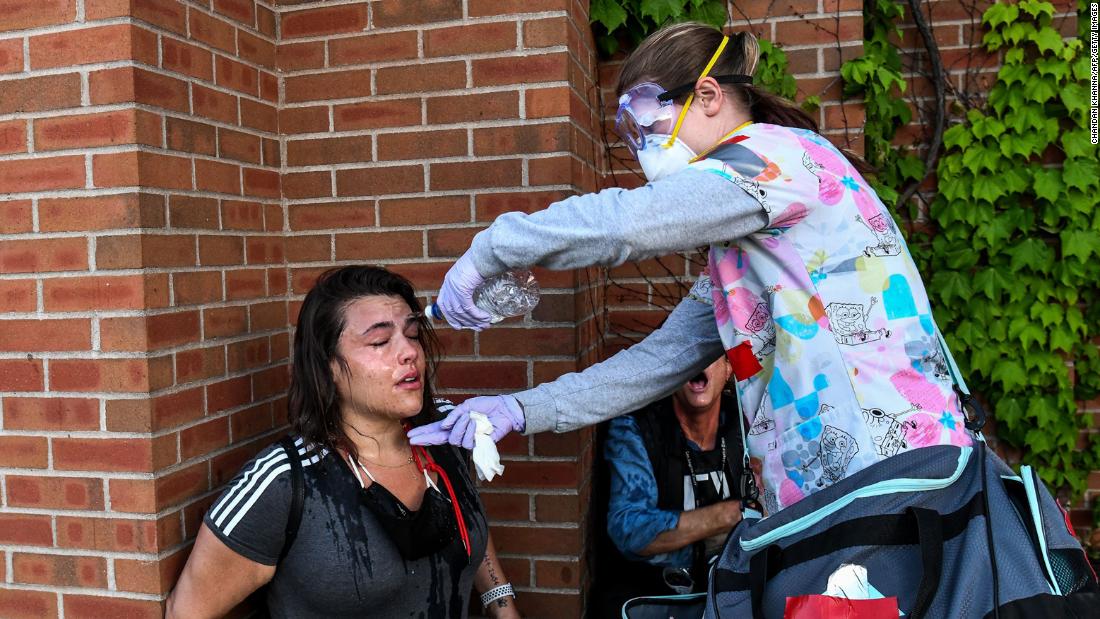 The 25-year-old political organizer has provided first aid and health support at dozens of rallies over the past seven years. But this weekend was the first time he’s ever had to hand out more than a Band-Aid strip.

The majority of his work over the past five days has been flushing out tear gas from people’s eyes.

Though he was stationed in his usual location at Centennial Olympic Park more than 500 feet away from the main protest activity, Gates’ medical cart was hit with a rubber bullet shortly after the city’s curfew came into effect.

Soon he saw a man with blood pouring down the side of his face, stemming from a deep cut just above his forehead.

“You could see he’d been hit really hard by a projectile,” Gates said. The man’s blood soaked through multiple gauze sponges, and Gates was attempting to place a bandage on the wound. But the police were closing in.

They had to run.

Like field medics in a war zone, protest medics in the United States support demonstrators exercising their First Amendment rights. But their work can be so perilous that many won’t talk about it at all.

One example of this type of targeting occurred at a protest Tuesday night in Asheville, North Carolina, when a SWAT team cracked down on a medic station, despite what medics described as a verbal agreement with police that they could remain after curfew to attend to the wounded.

Police forced the dozen or so medics to leave, and a video by Asheville’s Citizen-Times shows police slicing through bottles of water.
The city’s police chief, David Zack, apologized in a statement for destroying rather than confiscating the medical supplies. He defended the action, stating that officers were trying to “eliminate objects that can be thrown at protesters and law enforcement” and that the medic station was on private property.

Five street medics that CNN reached out to for this story said they were unwilling to be quoted using their full legal names, citing fears of being targeted by police for providing medical assistance at previous demonstrations.

An underground network of medics

“We try really hard to not interact with the media to maintain privacy for our patients,” said one medic, using the pseudonym Emma. “They have been hurt by law enforcement.”

She shared her story under condition of anonymity, in order to protect her identity and that of patients she has treated who she said have been wounded by police. For that same reason, she wouldn’t name the city where she’s been working over the past week.

Emma is part of a street medic collective devoted to providing medical support at protests. For the collective to safely function, she said it’s best for them to be as discreet as possible.

“We don’t want law enforcement to target street medics any more than they already do,” she said. “They think that we’re in a leadership role.”

While some medics identify as health workers during protests, she explained, many do not because they also fear being targeted by police.

Many patients Emma and her colleagues treated this week have required eye flushes due to tear gas exposure. Some have suffered asthma attacks after breathing in the riot control agent.

“Police are constantly unleashing weapons that make people cough during a pandemic,” she said. “That’s unconscionable.”

Nearly 1,300 public health and medical officials on Tuesday signed an open letter calling for law enforcement to stop using “tear gas, smoke, or other respiratory irritants, which could increase risk for Covid-19 by making the respiratory tract more susceptible to infection, exacerbating existing inflammation, and inducing coughing.”
Tear gas is banned by the Geneva Convention for use in warfare between nations, but is commonly used to disrupt large-scale riots in cities around the world. Its use is legal in the US.

In the past few days, Emma and fellow medics have treated broken bones, head injuries and projectile wounds from rubber bullets that had resulted in some patients losing their vision.

Emma began serving as a street medic in 2011 during the Occupy Wall Street movement. Since then, she’s treated injuries at demonstrations and protests in about a dozen cities, for causes including Black Lives Matter, immigrant justice, climate change and LGBTQ rights.

In that time, she has directly trained more than 100 people in street medic procedures and instructed hundreds more activists on how to stay healthy while demonstrating.

Following the recent death of George Floyd at the hands of police, protests in cities nationwide are receiving a different response from authorities than what she’s used to seeing at left-wing rallies.

“Police are much more violent when protesters are specifically calling out police brutality,” she said. “Police are not just there as law enforcement. They are there as counter-protesters.”

Know the risks if you attend protests

Given the increased use of tear gas and rubber bullets to quell lawful protesters, Emma felt it was important to step forward.

One of the best resources is “Riot Medicine,” an online book recently published for free, she said.

She ticked off tips that battle-hardened protesters have learned the hard way.

“Don’t wear contact lenses to a protest,” she said.

The chemical can get caught in contacts, making the burning much more difficult to address, she said. If you’re anticipating tear gas, it’s better to use goggles with rubber around the edges rather than foam. The toxic fumes can penetrate foam.

And if you’re wearing a bike helmet to protect yourself from police closing in, choose the smooth-topped variety over one with vents, as they’re harder for someone to grab hold of.

Despite the risks, street medic collectives are recruiting. “We want people to know they can get trained as a medic to go out and do this kind of work,” she said.

She urged the brave and the willing to seek out a street medic organization in their local area in order to get hooked up with training opportunities.

A pastor shoulders the burden

“The use of tear gas is technically unprecedented but not surprising,” said Rev. Elizabeth Mount, a pastor at First Unitarian Universalist Church in Indiana, Pennsylvania. “With military style training more institutionalized, police treat protests as a military engagement.”

Mount received a 20-hour street medic training in 2006, and started training other street medics in 2011. The pastor has provided health support at more than 50 protests in various states. Usually that’s looking out for sunburn, dehydration and foot or ankle injuries.

If tear gas is in play, medics have run quick trainings prior to protests explaining to demonstrators how to safely remove the chemical agent. Mount recommended placing a thumb on the patient’s eyelid, tilting the head back and using a squirt-top bottle to spray water from the bridge of the nose toward the edge of the eye. It’s important to keep the patient’s head tilted back so that the water doesn’t accidentally rinse the tear gas back into the patient’s nose, causing more burning.

Street medic training teaches lay people and credentialed health professionals the situational awareness needed to provide in a chaotic environment, which is in stark contrast to the calm and staid doctor’s office, Mount said.

For instance, it’s important to seek ongoing, continuing consent while treating a patient during a protest, and to understand how to care for an injured person while walking — or running.

If the police are approaching, medics must respect a patient’s wishes if he says, “‘I gotta bounce,'” Mount explained.

Because marginalized communities such as the LGBTQ community frequent protests, Mount — who uses they pronouns — noted that medics should ask patients which pronouns to use.

That training also focuses on how to avoid unwanted attention. “We’re encouraging medics to think intentionally about carrying markings,” they said.

All of this is part of Mount’s calling to live out the biblical message to serve those who are poor, sick and forgotten.

“The Bible, the Old and New Testament, is full of stories of building community while fighting against empire and oppression,” they said. “Our communities have always been more resilient than empire’s ability to oppress. We can imagine a community that’s more generous and more loving than this.”