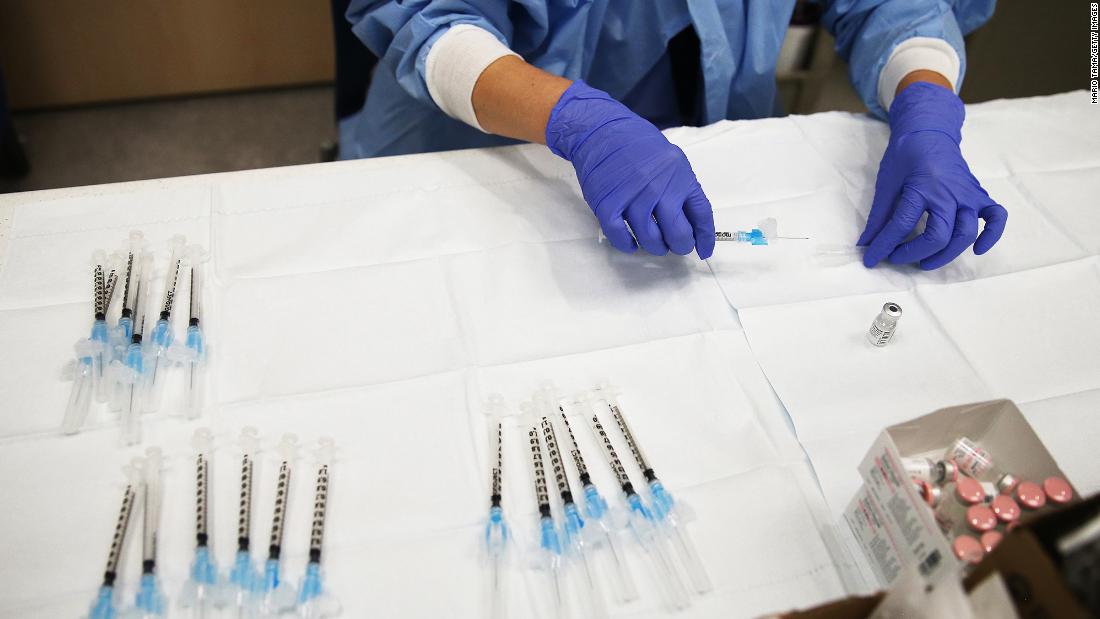 Lynn and Morales are among some of the people in the United States who have faced challenges with scheduling appointments for second doses of Covid-19 vaccine.

“There is some confusion out there,” Lynn said. “I’m just telling my friends and people I know to stay focused and read what you can and empower yourself.”

When Lynn learned in January that the Publix supermarket chain was beginning to offer Covid-19 vaccinations in some of its stores in Florida, she immediately booked an appointment online for herself and her husband Mark Young.

They are in the prioritized age group of 65 and older in the state of Florida, and Lynn said that she was “ecstatic” they were going to get vaccinated. However, getting to their appointments was a challenge.

At the time, Publix was rolling out the vaccinations in three counties in Florida as a test, Lynn said, adding that her husband and she don’t live near those counties.

“So, it did require a lot — a long car ride and a hotel stay,” Lynn told CNN on Monday.

“The city that this was taking place in — Spring Hill, Florida — is over three hours away. I think my appointment was for 9:30 in the morning, and I didn’t want to risk it with a three-hour-plus ride that day. So we decided, we’re going to sleep overnight,” Lynn said. “We even did a test run that night to see where our hotel was in relationship to the supermarket. That’s how careful we were.”

Lynn said that on the morning of their appointments, she thought the vaccinations were “very organized.” She said that she received a first dose of the Moderna Covid-19 vaccine and was told she could visit any Publix location to get her second dose. The Moderna vaccine is administered as two shots, 28 days apart.

“This is when everybody was being very optimistic, thinking that there was just a ton of doses that are going to be coming through the pipeline,” Lynn said.

Once 28 days passed, Lynn said that she made a reservation at a Publix location near her home to receive her second dose.

“I was so happy,” Lynn said. “And then about an hour later, we got a phone call from the pharmacist from that Publix saying you can’t have that appointment. How come? ‘Because we have you down for going to Spring Hill, Florida. There’s a dosage, with your name on it. And that’s the one that you’re supposed to get.'”

Lynn said that her husband and she drove three hours again to make their early morning appointments last Saturday. They stayed overnight in the same hotel.

“It was like deja vu, making the same ride, going up to the hotel. This time we didn’t have to do a test run because we knew where the supermarket was,” Lynn said.

Lynn said that her husband and she successfully received their second doses. She described the whole experience of getting those second-dose appointments as “topsy-turvy,” but worth the hassle.

“This is life and death — and I just want to give myself all the advantages that I can, and I just hope other people feel that way too. And hopefully a story like this will empower people that you just can’t wait,” she said.

Morales, based in New York, said that she felt strongly that her grandparents, who live in Florida, should get their Covid-19 vaccines.

Her mother’s father, 87, and her mother’s mother, 85, were diagnosed with Covid-19 over the summer, she said, and her family does not want to go through that again.

“His case was much more severe than my grandmother’s. It was a very scary time,” Morales said. “Thankfully, they both recovered.”

As soon as vaccines became available in Florida, Morales said that her mother, Dellonilda Padrón, who lives near the grandparents, worked on getting their vaccinations scheduled.

Dellonilda told CNN on Monday that her father still has not received the vaccine but she was able to make an appointment for her mother to get a first dose at Leon Medical Center-West Chester in Miami.

Her mother, Rosario Estela Padrón, received a dose of the Pfizer/BioNTech vaccine and was scheduled to return to the medical center in 21 days to receive her second dose.

“She was supposed to get the second one on the third of February,” Dellonilda told CNN on Tuesday. But Dellonilda said that when she called the medical center to confirm the time of her mother’s second-dose appointment, she was told that there were no vaccine doses available.

“They don’t have the second one and I called almost every day,” Dellonilda said. “They told me that they will call me when they get the second batch.”

Dellonilda said that, while trying to schedule her parents’ vaccination appointments, she was told some misinformation about the vaccine — including staff at the medical center telling her that her parents “probably don’t need it anyways” because they already had Covid-19, she said.

Dellonilda’s daughter Morales told CNN on Tuesday that she is “very concerned” that this type of misinformation about the Covid-19 vaccine came from a health care provider.

Health officials currently urge people who have recovered from Covid-19 to be immunized. CNN contacted Leon Medical Centers on Tuesday to confirm its policy and was told “we recommend that patients who had Covid-19 before still get vaccinated.”

Leon Medical Centers told CNN in an emailed statement that any patient in its health system who has received a first dose is automatically scheduled for a second dose and second doses are currently in stock and on site.

“To be clear, no one who is scheduled for a second dose, and has been clinically cleared, has been denied a second dose because of lack of vaccine,” the statement said. The center has confirmed with CNN that it will “clear up any confusion” over Dellonilda’s mother Rosario’s second dose.

Dellonilda confirmed on Tuesday that Leon Medical Centers contacted her in response to CNN’s reporting, and she plans to take her mother to get the second dose of vaccine on Wednesday.

The center added in its statement that the vaccination process has been “smooth” so far and “we are honored to be playing a small role in this effort.”

In response to Leon Medical Centers’ statement, Dellonilda’s daughter Morales told CNN on Tuesday that she does not believe the challenges with scheduling her grandparents’ vaccine appointments were due to “clerical error.”

Lori Tremmel Freeman, chief executive officer of the National Association of County and City Health Officials (NACCHO), told CNN on Monday that she has heard anecdotal reports of some vaccination sites canceling appointments for second doses, but it remains unclear why cancellations are happening since second doses are automatically reserved when initial vaccine doses get shipped.

“You get vaccine A at the same time that vaccine B is being held in reserve and so I don’t know what could be causing the second vaccine dose not to be there, because the way the system is set up, the shipment automatically occurs at the prescribed interval after the first vaccine is given,” Freeman said.

“If vaccinators are somehow using that second dose shipment to do first vaccinations for priority groups, then that could skew the whole process,” she said. “I don’t know why or when that would occur, but I am concerned about hearing these things.”

CNN has contacted the state of Florida — where Morales’s grandparents and Lynn currently live — for comment. But in some states, second-dose appointments may fall outside of normal schedules.

For instance, Chad Wasdin, a spokesperson for Gwinnett, Newton and Rockdale County Health Departments in Georgia, told CNN that some of their second-dose vaccination appointments fall outside of the normal three to four weeks for Pfizer/BioNTech’s and Moderna’s vaccines, respectively. But all of the second doses are administered within the maximum six weeks recommended by the US Centers for Disease Control and Prevention.

“Now that we have larger sites, we are working to move as many second doses closer to their recommended date as we can,” Wasdin said. “We have not canceled any second doses.”

In South Carolina, due to concerns around second-dose appointments, the Department of Health and Environmental Control confirmed with CNN on Monday that the state encourages people not to leave their first vaccination appointment without having their second appointment scheduled, in order to avoid any issues.

Washington State Department of Health spokesperson Shelby Anderson also confirmed with CNN that in the state of Washington the department has asked that providers “schedule second dose appointments while patients are getting their first dose.”

In California, Darrel Ng, a spokesperson for the state’s Covid-19 Vaccine Task Force, told CNN in an email on Monday that there has been “extremely constrained supply” of vaccine availability.

With “relatively flat” supply, limited quantities of vaccine devoted to large community clinics three weeks ago will now need to go to provide second vaccine doses, Ng said. “We are working with our federal partners to increase overall supply to the state,” he said.

The Biden administration announced Tuesday that it is increasing the number of weekly vaccine doses going to states, tribes and territories by 28%.

Jeff Zients, White House Covid-19 response coordinator, said at a White House Covid-19 briefing that when the Biden administration came into office, the US government’s weekly delivery of vaccines to the states was 8.6 million doses. It’s upping that to 11 million Zients said.

“I know Americans are eager to get vaccinated,” Zients said. “We’re working with manufacturers to increase the supply of vaccines as quickly as possible.”

Zients attributed the increase to support for manufacturing, including the use of the Defense Production Act to help get more equipment to Pfizer, and a distribution system that allows a rolling inventory of first and second doses to ship to states.

“The increase is 5% this week over last week, but it’s 28% across the last three weeks,” Zients said. “I think it’s the manufacturers doing a good job and the President and the team doing all we can to support that manufacturing process.”

The administration announced Friday it would use the DPA to expand priority ratings for Pfizer, including the filling pumps and other components needed to manufacture the Covid-19 vaccines, which would eliminate an existing bottleneck in production.