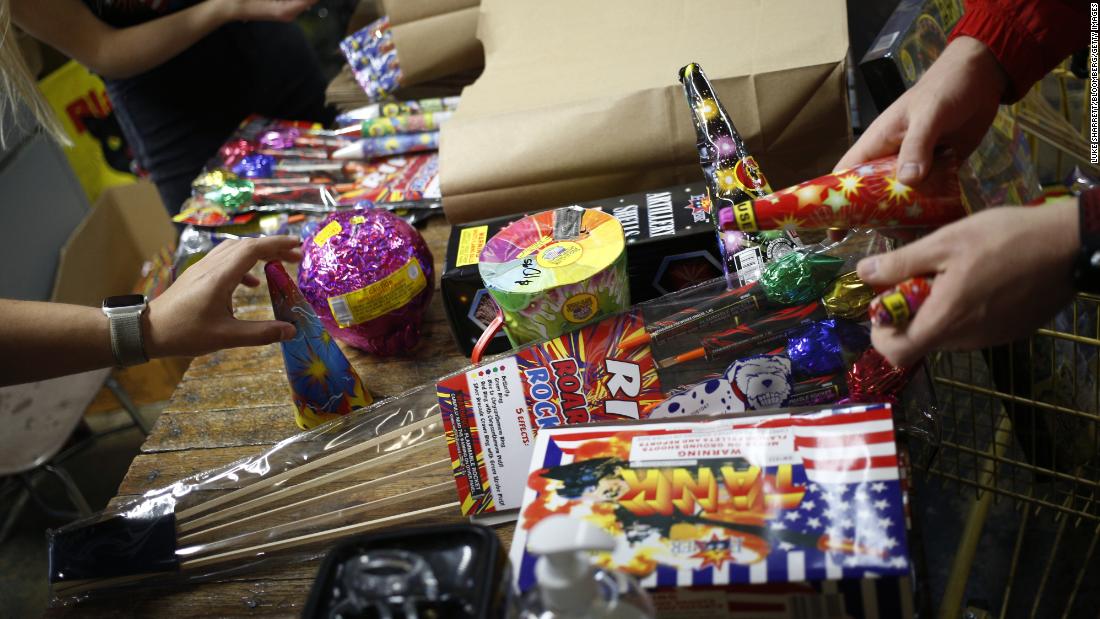 The study analyzed 12 different retail fireworks and found that once set off, five of them released particle emissions that could damage human cells and animal lungs.

Consumers tend to forget about the toxins that are released, said Terry Gordon, study author and professor in the department of environmental medicine at New York University’s Grossman School of Medicine.

“You or your family is setting off a ton of fireworks, and you’re doing it safely as far as physical injury is concerned, but people ignore that they’re inhaling high levels of toxic metals,” Gordon said.

The toxins come from the different metals in the fireworks that make them turn different colors, according to the study. For example, the study said that blue fireworks can be made of copper and red fireworks can contain strontium.

Gordon said that his study did not analyze if certain colors released more toxic metals than others. However, certain types of firecrackers had lower toxicity levels. “The firecrackers had very very high levels of aluminum,” Gordon said. “As far as toxicity, they were very low.”

His experiment consisted of setting off consumer fireworks in a stainless-steel chamber, filtering the particles with a pump, then exposing human cells and mice to the particles.

During his research, Gordon said he found that two of the fireworks emitted lead particles. One of them was 10 times more damaging compared to the control in the experiment, according to the study.

Gordon said that the firework emitted lead particles at 40,000 parts per million, which is exceedingly high. Normally, lead should not be emitted at all, he said.

The American Fireworks Standards Laboratory is an independent, nonprofit organization that sets voluntary standards for American fireworks. While it tests the fireworks to ensure they are safe, the laboratory doesn’t catch everything, Gordon said.

“Even though this laboratory has requirements for importing and the safety of fireworks testing, it’s not broad enough to capture all the fireworks that should be made illegal,” Gordon said.

John Rogers, executive director of AFSL, said that his organization randomly samples crates of fireworks because the group does not have the capacity to test every crate. His team works in Chinese factories to ensure that the fireworks not only meet federal standards, but also AFSL’s own voluntary standards.

For example, federal regulations require that the ball of the shell effect cannot exceed 1.75 inches in diameter, but AFSL mandated additional safety requirements, according to Rogers.

“We talk about how high they have to go into the air, what the maximum burst radius is, and things of that nature,” Rogers said.

According to Rogers, AFSL oversees about 85% to 90% of the fireworks that are shipped from China to the United States. In testing, Rogers said that his team does not typically find the presence of lead in samples.

Gordon said that his study did not research the effects that these toxins such as lead have on the body, but he said that they could lead to respiratory issues.

“I could hypothesize that people could have, especially susceptible people like asthmatics, increased episodes,” Gordon said.

The particles can also have a negative effect on children’s respiratory systems, according to Dr. Kristin Van Hook, chair of the American Academy of Pediatrics section on pediatric pulmonology and sleep medicine. She suggested that children avoid standing where the firework smoke is blowing.

“Allow the adults to be the ones to set off the fireworks and stay upwind from it so that the smoke is blowing in the breeze,” Van Hook said.

She said she has seen cases with children who have asthma who, after breathing in fumes from fireworks displays, had to go to the emergency room. Van Hook recommended limiting the amount of time children are exposed to firework fumes and watch carefully for any signs of trouble breathing.

Gordon said that he would like to conduct experiments using humans at a fireworks show to see the real-time effects of the particles on the body, but that in the past he has faced challenges that make it difficult to test. Specifically, the changing wind direction makes it hard to know where to stand, Gordon said.

“The wind was blowing a certain way, so I put my sampler downwind,” Gordon said. “When it came time, it was the wrong direction.”

For families, Gordon recommended that they be aware of what their children are being exposed to and that everyone should try to stay downwind while around fireworks. The fireworks industry needs to have more safety regulations, he added.

“Given what we’ve found, I propose that … they make sure they are importing safer fireworks and that that’s what the consumers use,” Gordon said.