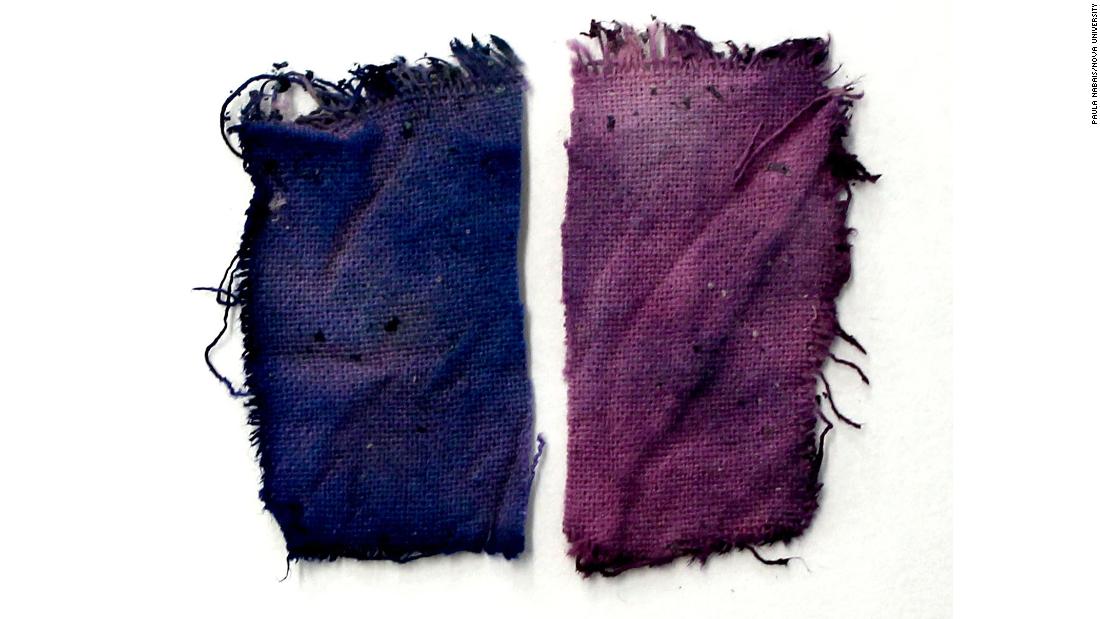 Researchers have recreated a vivid, purplish blue watercolor that can be found illustrating the pages of decorated medieval illuminated manuscripts, according to a new study.

But it took a diverse team of researchers, old recipes and a journey to a medieval walled village in Portugal to determine the source of the elusive color.

The color is called folium, and it was used as early as a thousand years ago. It fell out of favor by the 19th century, and scientists tried recreating it and discovered its source in the century that followed.

Understanding the source and composition of the dye is key to preserving medieval illuminated manuscripts.

“Illuminated manuscripts are the most abundant and well-preserved medieval cultural artifacts,” said Maria João Melo in an email to CNN, study author and professor in the department of conservation and restoration at the New University of Lisbon in Portugal.

“Color is a fundamental attribute of these precious works of art, and we particularly care for the most ‘endangered colors,’ the organic-based pigments and dyes,” she said. “To preserve manuscript illuminations for future generations, we are combining methods from the humanities and the natural sciences.”

A team comprised of chemists, conservation scientists and a biologist specializing in botany came together as a kind of detective squad.

“This interdisciplinary team was able to tackle all angles necessary for solving this 1,000-years-old mystery,” Melo said.

They looked to medieval sources that credited the plant, Chrozophora tinctoria, as a natural source of color that created blue and purple dyes. They were stored on cloth and dried as watercolors. When it was time to use them as paint, a piece of cloth was cut and the paint was extracted with water or another element to bind it to the page.

Books from the 12th, 14th and 15th centuries described the plant, when it should be collected and the delicate way to process it.

The plant is a small, unassuming herb found in the Mediterranean, North Africa and central and southwestern Asia, according to the study. It’s usually spotted in dry areas and along the edges of agricultural fields.

The team collected the distinctive fruits, ripe and unripe, from the small plants in southern Portugal during July, August and September of 2016, 2017 and 2018.

“We found it, guided by biologist Adelaide Clemente, in a very beautiful territory in Portugal [called] Granja, near a very beautiful small town Monsaraz — a magical place, still preserved in time,” Melo said.

“Nobody in the small village of Granja knew [anything] about this little plant,” she added. “It may look like a weed, yet it is so elegant with its silvery stellate hairs that combine so well with the greyish green, and what a story there is behind it.”

The medieval recipes told them in detail not to break the fruit open and release the seeds. They were able to extract the compound responsible for the blue pigment from the fruits, isolate and purify it to successfully reproduce the color.

They used a combination of analytical methods to isolate its chemical structure.

The researchers learned that folium isn’t a dye similar to those extracted from other blue flowers and fruits. And it’s not like indigo dye. Instead, folium is an entirely new class of dyes.

The color comes from the fruits of the herb. Credit: Paula Nabais/NOVA University

They named the newly discovered molecule, derived from a hermidin alkaloid, chrozophoridin. Given that the plant also had its uses as a medicinal herb, the alkaloids responsible for this color can be found in other medicinal plants such as dog’s mercury.

The study published Friday in the journal Science Advances.

The researchers credit their team, with varied expertise, and the unique combination of medieval knowledge with 21st-century advances, to making the discovery.

“This power of bringing to the 21st [century] a lost knowledge is a powerful motivation,” Melo said. “[It’s] a ‘science of use’ that allowed our ancestors to produce magnificent colors — some of which still shine brightly more than a thousand years later. Will we be able to compete with them? Have we created synthetic colors that will last for centuries?”

Now, the researchers can study the stability of the dye, as well as how it responds to factors that may wear and break it down over time.

“This is essential if we desire to make these colors last forever — or at least as long as possible,” Melo said.