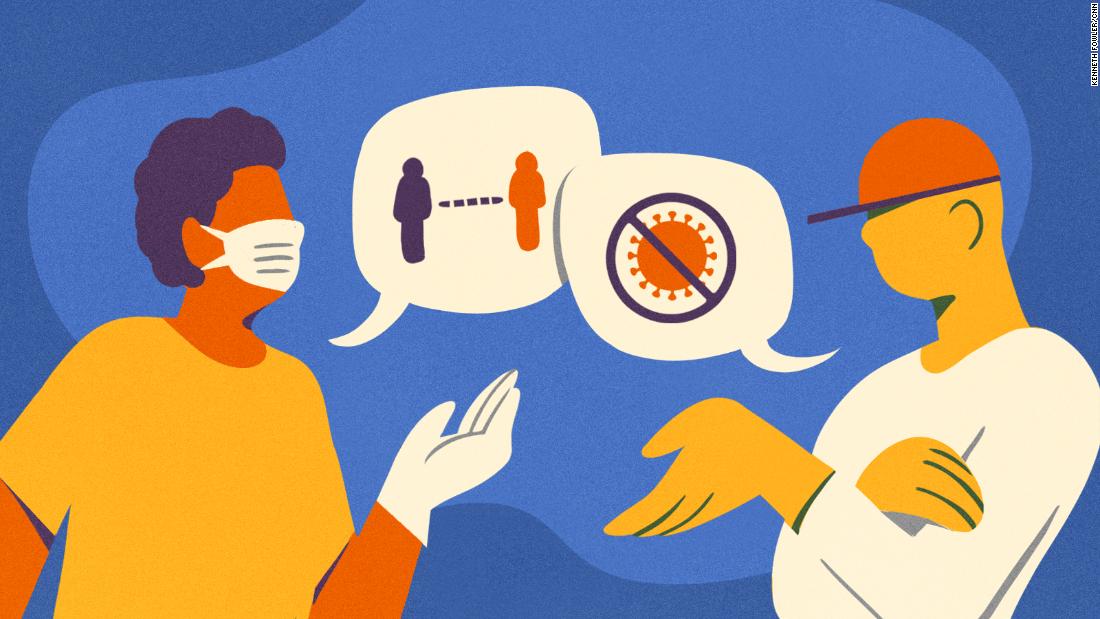 It was also the week when the tone of conversations with his family shifted.

“You’re not just calling to check in and see how everyone is. You’re calling to go into the arena.”

He hesitates to ask what his parents in Georgia are up to now, afraid they’ll share stories of frequent shopping trips or other outings, sparking another debate on the importance of taking precautions during a pandemic.

“It’s been this role reversal of the kid sneaking out at night,” Andrew, who is in his early 30s, said. “Now it’s the septuagenarian sneaking out to the golf course … and trying to hide it from the child.”

The coronavirus isn’t just threatening our health, it’s threatening our relationships as we try to navigate how a socially distanced world should look — something never done before. And now that states have replaced stay-at-home orders with various guidelines on reopening, there’s more room for differing views on social distancing.

These conflicts can be an opportunity for growth if we try to understand each other’s mindset, according to psychologist Holly Parker, but that depends on both parties’ willingness to embrace vulnerability.

“We can funnel some emotions into others,” Parker said, who lectures on close relationships at Harvard University. “So we can take an emotion like fear, sadness or anxiety and actually funnel that into something that is less vulnerable like anger, annoyance, frustration.”

CNN spoke to those experiencing these strains and has agreed to use only first names to protect their privacy.

The reality of the pandemic hit Andrew when discussions with his wife about each other’s work day changed. She left for her shift at the hospital while Andrew worked from home and watched their 9-month-old daughter.

“My wife’s experience of maybe having to hear about one death a week shifts to hearing about one death a day,” he said. His wife started coming home and showering immediately without touching anything, “a weird new feature of her commute,” he added.

Andrew began sharing these stories with his parents, who he said were less concerned about the virus.

“It was an hour of me just begging at times for that lifestyle adjustment to be made.”

Family phone calls, text threads and FaceTime discussions shifted away from questions like “what’s new with you” to lengthy conversations that veered into political and sociological beliefs.

Andrew would send economic studies of the 1918 flu or other outbreaks in Europe for his parents to review before their next conversation, during which he would plead with them to follow social distancing guidelines.

“It’s been really trying emotionally,” he said, “and then it all comes back around to, ‘hey, but for real, just please don’t go anywhere right now.'”

The resistance to altering our lives amid a pandemic may be connected with the brain’s bias toward believing in its own self-preservation, according to Parker.

This bias toward our own ability to survive can actually threaten our chances at survival, if recommended social distancing guidelines are dismissed. It’s a stark reality that Andrew tries to remind his parents of regularly, with his dad returning to the office now and their friends resuming routines reminiscent of 2019.

“With reopening, they’re being careful … it’s not as much as I would want, but I had to just accept I communicated everything I could,” Andrew said.

“Never in my life have I worked so hard to love my parents.”

‘In times of need and danger, you start to see who that person is’

Robert still remembers being at his girlfriend’s apartment when the reality of the pandemic sunk in.

As confirmed cases climbed into the thousands, they began limiting their outings to bare essentials, like grocery shopping and walking her dog. Then their state shut down.

“We were actually looking to move in together, and all of this happened,” Robert, who is in his early 20s, said.

When Georgia began re-opening, their attitudes toward social distancing diverged. Robert moved back in with his parents in Atlanta, which he said was an added motivation for him to remain cautious.

“If I go and hang out with my friends, or if I’m not taking these precautions, my parents are basically in danger.”

But his girlfriend didn’t share the same sense of risk, he said.

“It was like, ‘oh so we’re reopened, things are basically going to get better. If I get infected, I get infected. But we’ll be fine, I’m not in that (older age) bracket,'” Robert said of her outlook.

“She stopped following social distancing guidelines because I wasn’t there … which I totally understand, but at the same time I can’t come back and see you because you’ve exposed yourself and I’m stuck at home.”

Our ability to influence social distancing behavior is similar to our impact on health- related behavior, Parker said, and it happens most in romantic relationships. Like how couples can encourage each other to eat better, exercise more or go to the doctor.

But there’s another pull — an inherent desire to feel a sense of control over our lives.

“If somebody with infinite knowledge could tell us (when) this is going to be over if you just hunker down and you socially distance … if people knew, they would have a greater ability to hold on,” Parker said.

This uncertainty can make a pandemic hard for us to comprehend, “so people can feel like they want to instill a sense of predictability, they want to go back to what they know, they want to be able to control the outcome.”

For Robert, the blend of uncertainty and their loss of routine brought “an eye-opening experience in understanding each other a little bit better,” out of which came a breakup after about a year together.

“Which is OK and I totally understand from both of our standpoints,” Robert said. “But it just sucks when you think you know a person, and then you start to see especially in times of need and danger … who that person is and what their morals and objectives are.”