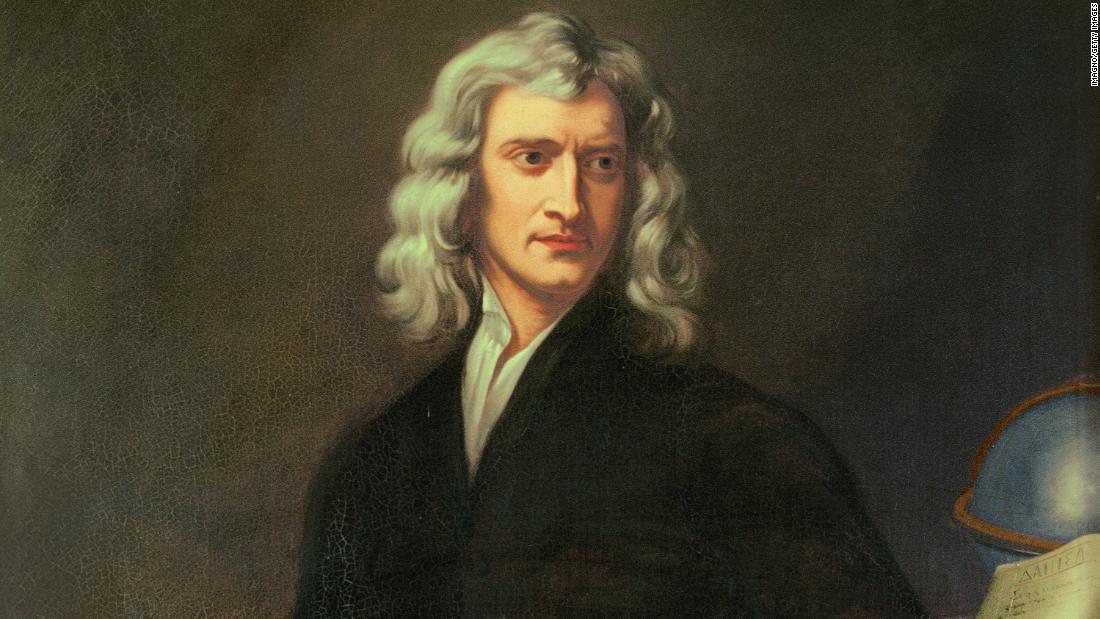 In a previously unpublished two-page manuscript dating to 1667, Newton wrote that to cure the plague, “the best is a toad suspended by the legs in a chimney for three days, which at last vomited up earth with various insects in it, onto a dish of yellow wax, and shortly after died.”

“Combining powdered toad with the excretions and serum made into lozenges and worn about the affected area, drove away the contagion and drew out the poison,” Newton noted in the document.

“I think certainly that the current medical situation has an impact on people’s interest in reading about the history of it,” Darren Sutherland, a senior specialist in books and manuscripts at Bonhams, told CNN.

The writing also references using stones like sapphire and amber as “zenexton,” or amulets, against the disease, among more mundane observations such as “places infected with the Plague are to be avoided.”

Newton took these notes while studying the work of Jan Baptiste Van Helmont, a renowned chemist in the 17th century and a prominent practicing medical scientist at the time. Van Helmont died in 1644. Among his most important contributions are that he first identified the existence of gases such as carbon dioxide, and he coined the term “gas.”

Although Newton was mostly interested in learning about chemistry from Van Helmont, he also focused his attention on a book Van Helmont wrote about the plague, the “Tumulus Pestis” (“The Tomb of the Plague”), based on his experience curing patients in Antwerp in 1605, according to Bonhams research.

It’s no coincidence that in 1667, Newton developed an interest in learning about the plague.

An estimated 100,000 people died of the disease in London between 1665 and 1666, according to the British National Archives. Newton himself famously spent two years in quarantine at Woolsthorpe Manor, his family’s estate in Lincolnshire, after he had to leave his college studies in Cambridge. Newton’s notes about the plague were likely written shortly after he was able to return to Cambridge.

“There had to be some kind of spark of interest in that moment, just for his intellect. While medicine was never a focus of his, I think there was a personal attraction to this particular subject at the time,” Sutherland said.

Using toad vomit or gemstones to cure the plague sure does sound kooky today, but Newton “wasn’t an outlier in the context of the 17th century,” Sutherland said.

Newton’s mention of toad and gemstone amulets as a possible cure for the plague does not surprise Elisabeth Brander, a rare book librarian at Becker Medical Library, she told CNN.

“We usually associate him with what we think of as very modern, forward-looking science, but when he was alive, the lines between what we would now consider science and superstition are much, much blurrier.”

According to Brander, Van Helmont’s toad cure is derived from the teachings of Paracelsus, a Swiss physician who lived in the 16th century.

Paracelsus “believed that the plague was caused by celestial disturbances on the body and that wearing a specific amulet could help disrupt the detrimental connection between the body and the stars,” Brander told CNN.

“We’ve since moved away from this idea of sympathetic forces creating certain disturbances in the physical body, but it made sense in the early modern period. Newton was in the middle of this transitional time period where the body of scientific knowledge was still in flux, which was very exciting,” she added.

Differentiating between Newton’s scientific accomplishments and his musings on toads and gemstones is only possible to us as contemporary observers, with the benefit of hindsight.

The 17th century was a time when many scientific discoveries we now understand as mainstream were first conceptualized and defined. Even notions like that of gravity, which is fully established today, took years to trickle into the common knowledge after Newton first formulated it, according to Sutherland.

“These momentous moments in our history weren’t momentous in the moment,” Sutherland added.