Seniors are turning to emerging technologies to connect during the pandemic 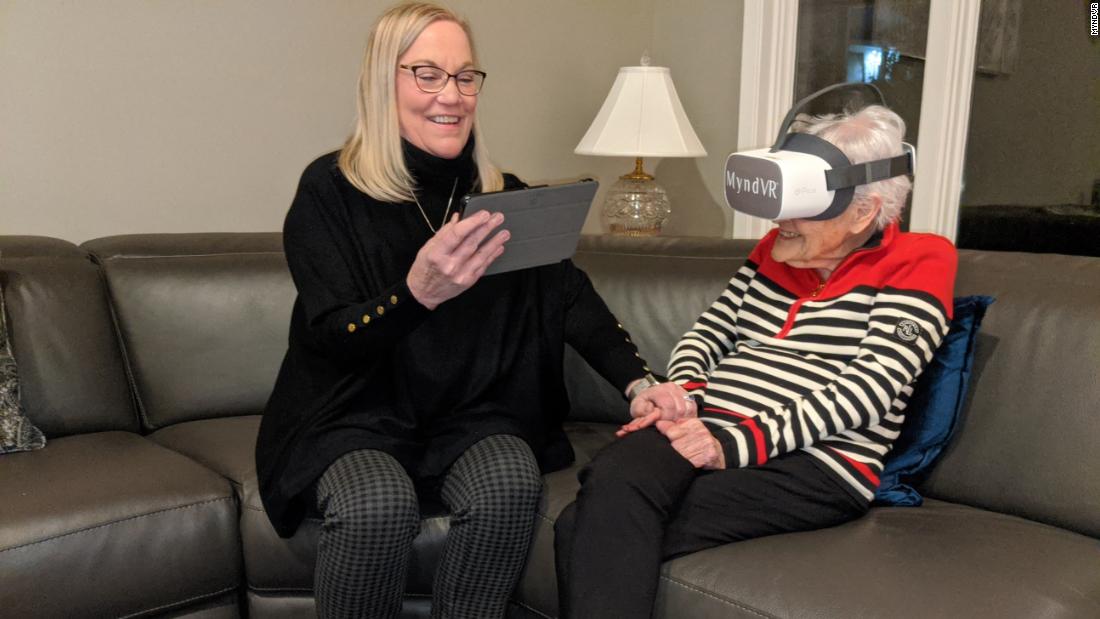 The ground moved quickly beneath him while he soared faster and faster through the sky.

When it came time to land some 10 minutes later, Merrill removed the virtual reality headset from his head, blinked, and he was back in his assisted living facility in Hockessin, Delaware.

Merrill is a resident at The Summit, where he can spend some of his time reliving the 1950s when he was a pilot in the Air Force, through virtual reality technology.

In the midst of a pandemic, with limits on in-person family visits and strict social distancing guidelines, some residents at assisted living homes are turning to new ways to interact with the world around them.

Through virtual reality and interactive gaming, older Americans are learning to stay connected and thrive during the pandemic.

Virtual reality is making its way into assisted living communities across the county to allow residents to explore the world without leaving their rooms.

Merrill, who had never used virtual reality technology before this year, said he’s enjoyed “flying” during the pandemic. “It’s a wonderful machine for living somewhere else when you know you’re stuck here,” Merrill said.

“When I’m in the machine, I’m in another world, a world in which I’m very familiar with,” Merrill said.

Tuck Wilson, a resident at The Virginian in Fairfax, Virginia, also used the virtual reality program to relive old memories such as traveling across Europe, while visiting new places she never had the chance to see.

“I was like a child with a new toy,” Wilson said. “I was utterly fascinated.”

Some of the virtual reality programs include traveling, attending concerts and more. One of the more unique programs that’s offered is simply being surrounded by a litter of puppies.

“One dog started toward my legs, and I just automatically drew back, so that shows you how into virtual reality I was,” Wilson said.

Both Merrill and Wilson used virtual programs sold by MyndVR, a virtual reality company that caters specifically to older adults with the goal of making them feel less isolated.

In addition to using VR to escape the world around them, MyndVR technology also motivates older adults to interact more with other residents, according to Wilhelima Saluto, the creative arts specialist at Upper East Side Rehabilitation and Nursing Center in Manhattan.

“After their experience with it, they tend to socialize with the other people because they’re excited and [want to] share it with other people,” Saluto said.

Much of the programming is intentionally designed to create a flood of memories for residents who may have forgotten certain parts of their life, according to MyndVR Co-founder and CEO Chris Brickler.

“They might have a mild cognitive impairment or even later forms of dementia,” Brickler said. “That becomes a really special exercise and people come out talking, expressing opinions.”

Some older Americans are also turning to interactive gaming programs like Restore Skills to stay connected. The program allows seniors to play games such as bingo and slot machines while improving their physical, cognitive and social skills.

Steven Landsman, a resident at The Jewish Home in Freehold, New Jersey, uses the program about once a week. One of his favorite games is the slot machine, where he practices moving his arms up and down to virtually play the game.

“It helps me relax myself and get really strong,” Landsman said.

A unique feature of the program is built-in video calling so families can see their loved ones playing games. Landsman said he recently played the slot machine game while using the video calling feature to connect with family.

“I just saw my sister on there,” Landsman said “She’s home with the kids. She cheered me on.”

Landsman’s sister, Linda Landsman, said that she enjoys watching him play and that it helps her stay connected with her brother, especially during the pandemic.

“He was winning the slot machines, and I was cheering him on that he won,” Landsman said. “I thought it was great exercise on top of everything.”

Currently, family members can use the video call feature to talk and watch the resident play, but they cannot play themselves.

Eran Arden, CEO of Restore Skills, said that by the end of July, the company will be launching the ability for families to play along. He also said the video calling feature was new as of May in response to the pandemic.

“When we realized that’s a need that we have to answer, we switched our development plan … and just focused on adding the video conference ability to the platform,” Arden said. “We understand how important it is and how patients and their loved ones need to have the ability to see each other.”