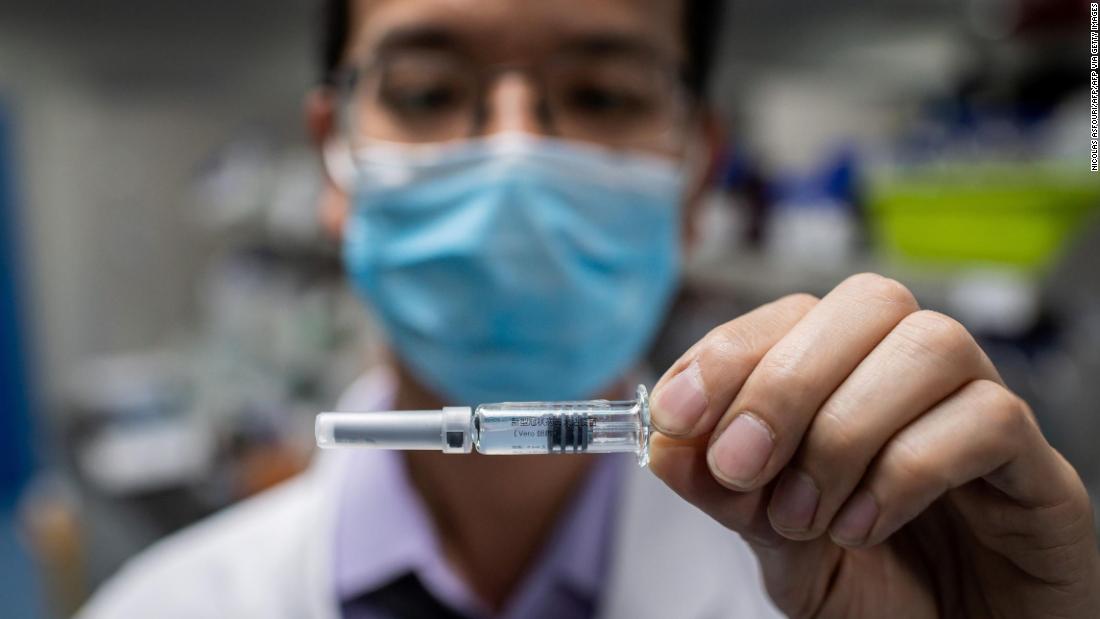 The Trump administration is not funding vaccine approaches that have been used for more than 50 years, including for current vaccines against hepatitis, flu, polio, and rabies.

Instead, the United States is investing up to more than $2 billion in newer approaches that are promising, but for the most part, have not resulted in approved vaccines, much less vaccines with long track records.

“New technologies are good, and they could perform well, but we should really be hedging our bets,” said Omer, who has helped develop several vaccines.

Dr. Paul Offit, a University of Pennsylvania professor who developed a vaccine against rotavirus, agrees.

C
hina has taken a very different approach than the US, with four of its five vaccines in clinical trials using the older approach.

But the director of the US National Institutes of Health says there’s a “need for speed,” and the older approach takes “considerably longer” to develop.

“We have no time to waste,” Dr. Francis Collins told CNN.

Collins said he also has safety concerns about the older approach favored by the Chinese. That approach takes the entire virus to illicit an immune response from the body, but the virus is first inactivated so it won’t cause harm.

“If you weren’t completely successful in inactivating the virus, you’d have the fear that the vaccine itself could be dangerous,” he said. “There’s always much more concern about safety.”

The newer vaccines use only part of the virus, or even just its genetic material. Collins said these types of vaccines “carry no risk of conveying the actual disease.”

“I think they’re doing the right thing,” Russell said of the US approach.

But some other scientists question if the older technology really takes that much longer, or really is more unsafe.

“The Chinese wouldn’t be doing this if they didn’t have a rational plan for it. They do not mess around,” said John Moore, a professor of microbiology and immunology at Weill Cornell Medical College. “The Chinese are not illogical.”

An announcement this week bears that out.

According to Brazilian health authorities, a Chinese company, Sinovac Biotech, will start Phase 3 clinical trials with an inactivated virus vaccine in the first week in July. Such trials are the last step before a vaccine seeks approval from regulators.

“The proof is in the pudding,” said Dr. Peter Hotez, a vaccine specialist at Baylor College of Medicine who is working on a Covid vaccine that uses a different approach from the Chinese.

But vaccine experts say the older approaches can be done safely, pointing to the vaccines on the market that use inactivated viruses.

They also point out that most of the US government money is being spent on new technology that has been studied experimentally, but has never gotten to market.

So far, the US government has announced it will be funding Phase 3 trials for vaccines made by three teams: Moderna, AstraZeneca and Johnson & Johnson.

Those three teams use approaches that have been studied in clinical trials for other viruses but have never resulted in an approved vaccine.

It’s unclear if funding for Phase 3 studies for other companies will follow.

In addition, the government has funded — at significantly lower levels — pre-Phase 3 research for three other companies that are developing Covid-19 vaccines. Of those, Merck has used the same technology for an approved Ebola vaccine, and Sanofi has used the technology for an approved flu vaccine. Versions of the platform used by the third company, Novavax, have been used on several vaccines.

The bulk of the US funding has come from the Biomedical Advanced Research and Development Authority, or BARDA, a part of the Department of Health and Human Services.

“Given the urgency of making hundreds of millions of doses of at least one safe and effective vaccine available as quickly as possible, the U.S. government is creating a COVID-19 vaccine portfolio that first leverages proven platform technologies,” according to a statement to CNN from BARDA Acting Director Gary Disbrow.

“So far, we have selected vaccine candidates for this flexible portfolio based on a combination of attributes of those platforms, such as the safety and efficacy data of vaccines broadly used or licensed on those platforms for other diseases, the scalability, and the domestic manufacturing capacity. We continue to add to the portfolio as other candidates produce compelling data,” Disbrow added.

That portfolio is still not wide enough for some experts.

They say if one of the US approaches works, then all will be well.

But if the Chinese are right and the US is wrong, it’s unclear when the Chinese would share their vaccine with the rest of the world.

And if the first US vaccine to come on the market is only somewhat effective, or has safety concerns, some fear the American public won’t believe public health authorities if they say to try the next vaccine that comes along.

The scientific community will “lose some credibility if that’s the way it plays out,” said Offit, the University of Pennsylvania vaccine specialist.

That’s why he and others want the US to spread its wings a bit and fund a more diverse field of vaccine candidates, including the older type favored by the Chinese.

“As a scientist, I’m super excited about the new technology,” said Omer, the Yale vaccine expert. “But if you think about this from a policy perspective, it’s good to spread your risk.”