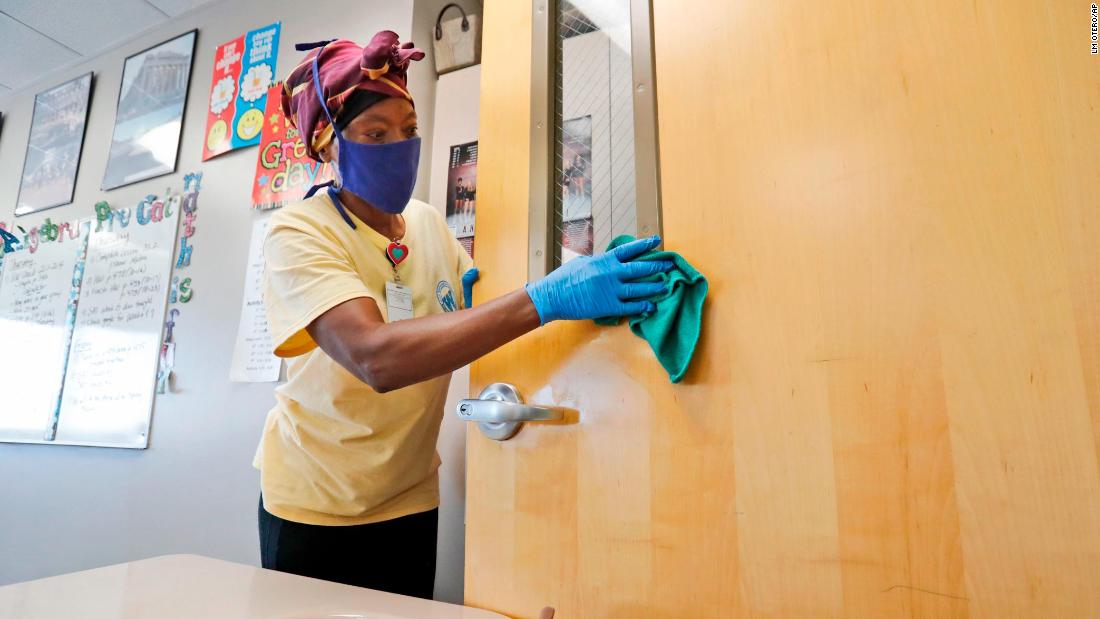 Many officials had hoped to send students back to school this month with coronavirus cases under control. But reopenings are underway as the number of cases in the US is more than 4.7 million and 156,782 people have died, according to data from Johns Hopkins University, leaving school districts to strategize how to safely restart.

Their plans for the best way forward vary wildly.

Chicago Public Schools is expected to begin the year with full remote learning for students, according to local reports. Meanwhile, Iowa Gov. Kim Reynolds pressed to have students back in the classroom by emphasizing that defying the state’s 50% in-person learning mandate is against the law.

Other school leaders fall somewhere in between. In California, Los Angeles County announced that officials will not issue any waivers that would allow elementary schools to open for in-person classes. And in Mississippi, Gov. Tate Reeves ordered a delay in the return-to-classroom date for students in grades 7-12 in eight counties.

But as the infection rates in the country change, so will many districts’ plans, said Wendy Price, president of the National Association of School Psychologists.

“There’s just a litany of things that schools are going to have to consider,” Price said. “And it’s no one size fits all. It really isn’t.”

Outbreaks in schools and camps

Already, there have been outbreaks among students and those caring for them.

Last month, a day camp in Oregon reported 25 people infected — 11 campers and 14 counselors. The camp, Trout Creek Bible Camp, did not require the public to wear masks indoors until July 1, and even then, the mandate was not extended to children.

While preparing for the start of the year, five employees in the Marietta City Schools system in Georgia tested positive for coronavirus, Jen Brock, the system’s executive director of communications, told CNN.

And on the first day of school in Canton, Georgia, a second grader tested positive, sending the teacher and 20 other classmates into a two-week quarantine, the Cherokee County School District told CNN.

Although health experts are still investigating how children contract and spread the virus, outbreaks could complicate an upsurge in a rare but paralyzing condition, the US Centers for Disease Control and Prevention said Tuesday.

Acute flaccid myelitis or AFM could peak in the coming months, and the CDC warned parents to be alert as it is not clear what effect the pandemic and social distancing could have on the number of cases.

States push for measures against the virus

Just as schools are adjusting plans to protect students and staff, state officials are also putting measures in place to manage infections among the public.

Former Ebola czar Ron Klain said Tuesday that people are more likely to die from the virus in the US than almost anywhere else.

Facemasks, distancing, isolation and testing have been emphasized by health experts as key tools in the fight against the virus.

At least 39 states as well was Washington, DC, and Puerto Rico have some type of mask requirement in place as cases rise again. Mississippi also issued a mandate on Tuesday for people diagnosed with the virus to isolate for 14 days, with violations punishable by a fine or up to five years in jail, according to an order issued by State Health Officer Thomas Dobbs.

In an attempt to slow the spread of the virus, Louisiana Gov. John Bel Edwards on Tuesday announced that the state would stay in Phase 2 of its reopening plan for another 21 days — meaning mask mandates, closures of on-site bar service and crowds limited to 50 people will continue.

And while many officials push for measures aimed at reducing the spread, Attorneys General from 34 states wrote a letter Tuesday urging federal officials to increase the supply and availability of the only drug authorized to treat the virus, remdesivir.

According to the letter, the company that produces the drug, Gilead, is unable to guarantee a supply that could properly address the safety needs of the public.

Children from minority and lower socioeconomic backgrounds at greater risk

Rising coronavirus rates are affecting minority children and those from lower socioeconomic backgrounds more than their peers, according to a new study.

The study, published in the journal Pediatrics, examined 1,000 patients tested at a Children’s National Covid-19 testing site in Washington, DC, between March 21 and April 28.

Of that group, just 7.3% of White children tested positive for coronavirus, in contrast to 30% of Black children and 46.4% of Hispanic children. Three times as many Black children reported known exposure to the virus as White children, Dr. Monika Goyal of Children’s National Hospital and colleagues reported Wednesday.

And while about 9.7% of those in the highest income quartile were infected, 37.7% in the lowest quartile tested positive, Goyal’s team found.

“Understanding and addressing the root causes of these disparities are needed to mitigate the spread of infection,” the team wrote.