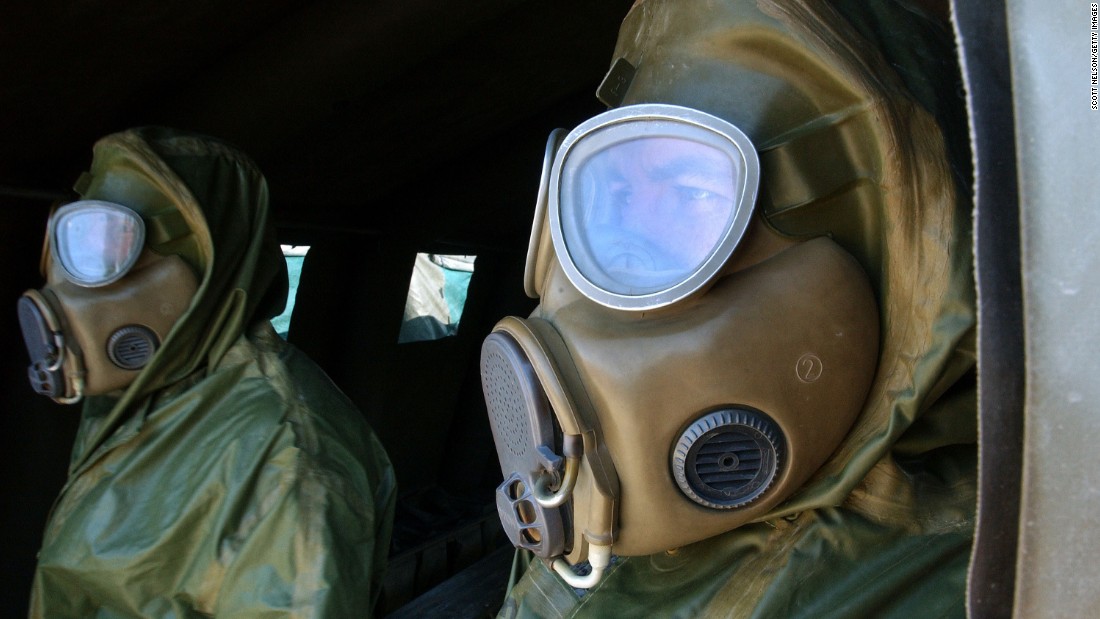 Sarin is an extremely volatile nerve agent because of its ability to change from liquid to gas.

If it evaporates into a gas, it can spread into the environment.

Sarin’s designation by NATO is GB.

People are exposed to sarin through skin contact, eye contact or by breathing it in. Sarin can also be mixed with water or food.

Symptoms of mild to moderate exposure include (from the CDC)

Symptoms of severe exposure include

Leave the area of contamination as quickly as possible. Seek fresh air if exposure occurs indoors. If exposure is outdoors, head to higher ground as sarin is heavier than air and sinks.

If ingested, do not induce vomiting or flush with fluids.

Medical care should be sought immediately. Antidotes are available in many hospitals.

1938 – Sarin is developed in Germany as a pesticide.

April-May 1967 – The US military secretly tests sarin in the Upper Waiakea Forest Reserve on the island of Hawaii. The testers detonate sarin-filled 155mm artillery shells to study how the nerve agent disperses in a tropical jungle. The Pentagon confirms the “Red Oak” program in November 2002.

March 16, 1988 – The Iraqi air force attacks the northern Iraq town of Halabja with poison gases that were thought to include sarin, VX and other deadly compounds. Reports indicate that 5,000 people died in the attack. Countless others suffer eyesight loss, respiratory ailments and cancers.

June 27, 1994 – In Japan, seven people die and more than 500 are hospitalized when the Aum Supreme Truth (or Aum Shinri Kyo) cult releases sarin from a truck by driving slowly around an apartment complex in Matsumoto, Nagano Prefecture. Another victim dies in 2008.

May 17, 2004 – A coalition convoy in Baghdad finds sarin gas in an artillery round that had been rigged as an improvised explosive device. The IED detonates as officials attempt to defuse it. Two members of the explosive ordinance team suffer minor exposure.

June 23, 2006 – The US Army releases a report to Congress stating that allied forces have recovered approximately 500 weapons munitions containing degraded mustard or sarin gas since the start of the Iraq War in 2003. The weapons were produced before the 1991 Gulf War. However, according to October 2014 reporting by the New York Times, even at the time of the report’s publication the information was “outdated” and “understated.”

June 15, 2012 – Katsuya Takahashi, 54, the last fugitive suspect in the 1995 sarin attacks on the Tokyo subway, is captured by Japanese police, ending a 17-year manhunt.

August 21, 2013 – A new alleged chemical weapons attack kills more than 1,000 people in the Syrian countryside outside its capital, Damascus. Hundreds of those killed are children.
September 1, 2013 – US Secretary of State John Kerry announces that samples of blood and hair taken from eastern Damascus have “tested positive for signatures of sarin.”
September 16, 2013 – UN weapons inspectors return “overwhelming and indisputable” evidence of the use of sarin in Syria, UN Secretary-General Ban Ki-moon says.
January 4, 2016 – The UN releases a report that indicates Syrians may have been exposed to a sarin-type gas in 11 instances. The UN based its report on a publication by the Organization for the Prohibition of Chemical Weapons. Source of the gas and those responsible for its use are being investigated.
April 4, 2017 – An airstrike on a rebel-held town in northwestern Syria leaves 89 civilians dead, including children, from a suspected chemical attack, using sarin gas. The US, Turkey and other Western states blame the regime of Syrian President Bashar al-Assad who vehemently denies the accusation. The following week, UK scientists claim to have evidence that sarin gas, or a similar substance, was used based on samples from victims. Investigations continue to confirm the gas used and those responsible.
April 26, 2017 – French Foreign Minister Jean-Marc Ayrault announces that samples taken from the attack on the rebel-held town of Khan Sheikhoun matched those from a previous incident, and that the evidence provides proof that the Syrian regime is responsible for carrying out the attack on April 4.
July 2018 – Cult leader Shoko Asahara and twelve other members of the Aum Shinrikyo cult are executed for their roles in the 1995 Tokyo sarin attack.