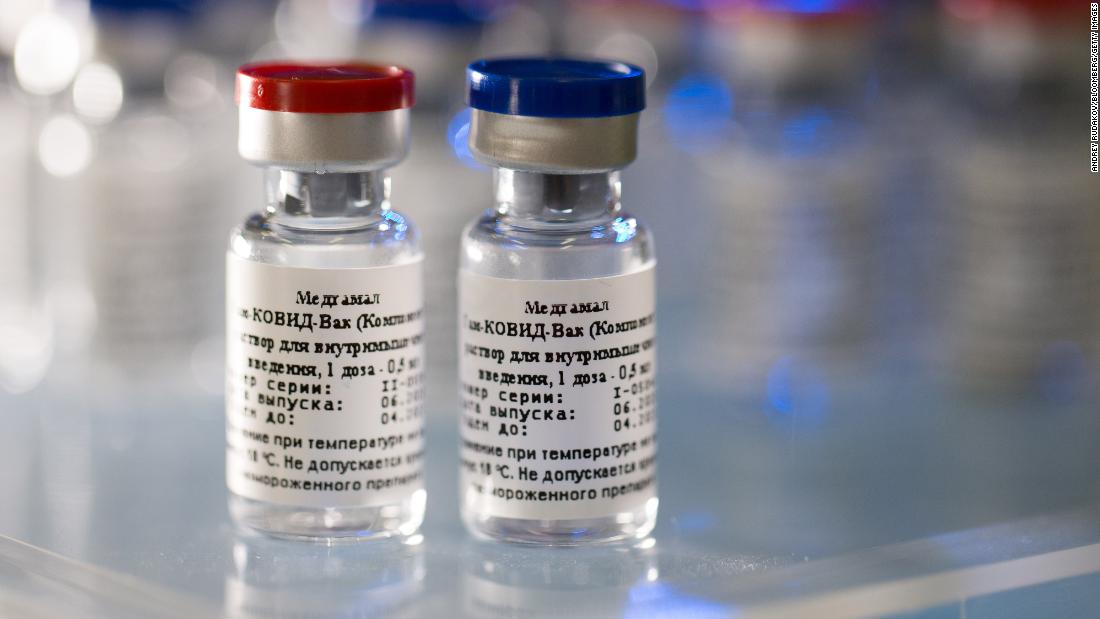 In the Phase 1 and 2 studies of the vaccine, which is named Sputnik V, all 76 study participants developed antibodies to the virus that causes Covid-19, according to Friday’s report in The Lancet.

The levels of neutralizing antibody response were similar to the immune response that people had after naturally recovering from Covid-19, according to the study.

The researchers also looked at responses from T cells, another component of the immune system.

“[Outcomes from] the trial also suggest the vaccines also produce a T cell response within 28 days,” the researchers wrote.

Scientists not involved in the study said that, while the results are a positive sign, only larger, Phase 3 trials can confirm whether the vaccine actually prevents illness with Covid-19.

“The data on the Russian vaccine studies reported in The Lancet are encouraging,” said Brendan Wren, professor of microbial pathogenesis, London School of Hygiene and Tropical Medicine.

In the study, half of the participants developed fevers and 42% developed headaches. In addition, about 28% experienced weakness and 24% had joint pain.

The article did not say how long these side effects lasted but said “most adverse events were mild.”

The vaccine was registered in Russia in August, before it had gone through large-scale trials. The researchers at the Gamaleya National Research Centre for Epidemiology and Microbiology in Russia received approval on August 26 to do a Phase 3 trial, which is expected to have 40,000 volunteers, according to a press release from The Lancet.

The researchers are already distributing the vaccine to high-risk groups, according to Kirill Dmitriev, head of the Russian Direct Investment Fund (RDIF), which is financing Russian vaccine research.

Gamaleya is using adenoviruses in their Covid-19 vaccines; this is the same approach used in the vaccine developed by the University of Oxford and AstraZeneca. The adenovirus delivers genetic material for the spike protein that sits atop the virus that causes Covid-19, and that genetic material is designed to generate an immune response to the virus.

Adenoviruses can cause a variety of symptoms, including the common cold. The researchers manipulate the virus so it will not replicate and cause illness.

The Gamaleya vaccine is given in two doses, and each dose uses a different adenovirus vector.

Naor Bar-Zeev, deputy director of the International Vaccine Access Center at Johns Hopkins University, said in a linked comment that the studies are “encouraging but small,” according to The Lancet. Bar-Zeev was not involved in the Russian study, but peer reviewed it.

Dmitriev, CEO of the RDIF, said that the trial results confirm the “high safety and efficacy” of the vaccine, adding in a statement Friday that the results are “a powerful response to skeptics who unreasonably criticized the Russian vaccine.”

Russia has previously said it plans to begin mass vaccination of citizens in October, and the country’s health ministry has said the country’s frontline medical staff and teachers will be the first vaccinated.

Post-registration trials of the vaccine will begin in Moscow next week, the city’s mayor, Sergey Sobyanin, said Friday.

More than 5,000 people have already signed up to participate in the trials, according to Sobyanin, who spoke during a video conference with Russian President Vladimir Putin.

Sobyanin also announced that he had been vaccinated with the first of the vaccine’s two shots.

The mayor said polls suggest around half of Russian citizens are skeptical about the vaccine.

“According to the polls, around half doubt whether they need to get vaccinated for coronavirus, whether it is developed enough or not. Two months ago, there were almost 90% skeptics,” said Sobyanin.

Without completed Phase 3 trials, Russia has not proven to the world Sputnik V works, though Dmitriev has previously said several countries in Latin America, the Middle East and Asia have expressed interest in procuring the vaccine.

Russia isn’t the only country fast tracking its vaccine — China approved an experimental coronavirus vaccine in June for members of its military, and in August, it emerged the country had been using the vaccine on those in “high risk” professions — such as frontline medical professionals and border inspectors — since July.

CNN’s Zamira Rahim and Amy Woodyatt contributed to this report.