Rosh Hashanah 2020: Here’s how to celebrate the Jewish New Year this week 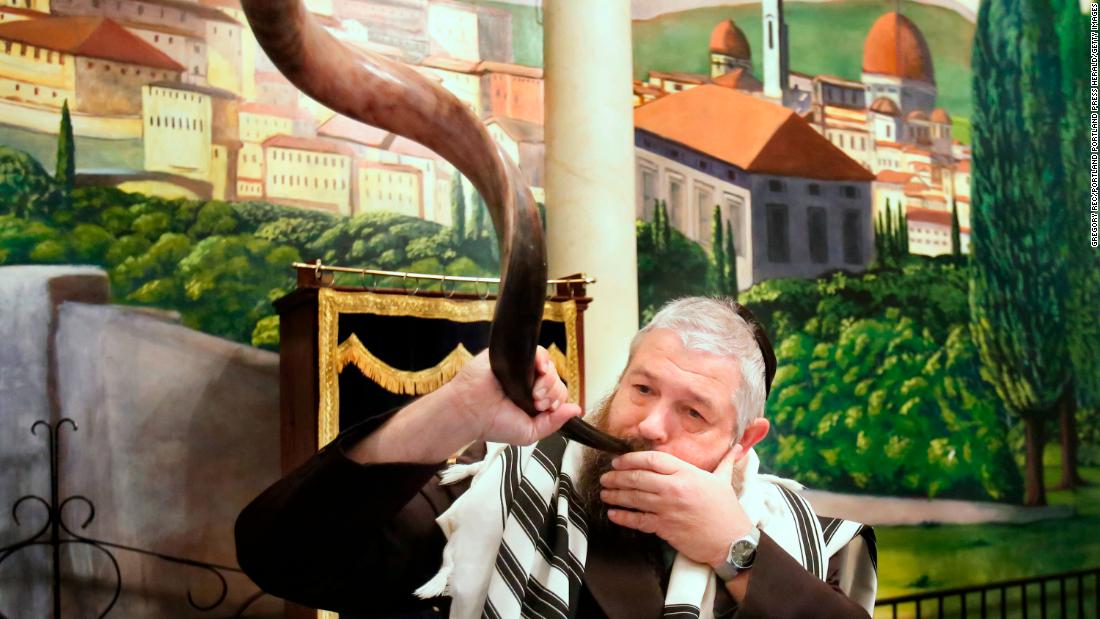 Rosh Hashanah, which marks the Jewish New Year, begins Friday, September 18. Even if you’re not Jewish, it’s a way to immerse yourself in parts of these rituals of renewal. Maybe God knows we all need a little renewal now.

“It’s about how you want to clear your soul for the New Year,” said Archie Gottesman, who co-founded the organization with Stuart.

“People have been stressed. They’ve been isolated and freaking out,” said Rabbi Amichai Lau-Lavie, founding spiritual leader of Lab/Shul NYC, an experimental community for sacred Jewish gatherings, which is organizing its own virtual high holiday programs separate from JewBelong.

JewBelong sums up 2020’s anxieties in its event tagline: “Kinda feel like God owes us an apology this year?”

Bringing in a New Year in September

Rosh Hashanah, which means “head of the year” in Hebrew, is a two-day celebration that marks the beginning of the Jewish High Holy Days each autumn.

The New Year inaugurates 10 days of repentance, also known as Days of Awe. They lead into Yom Kippur, the Day of Atonement, which this year is on Sunday, September 27. That’s followed by Sukkot, of the Feast of Tabernacles, commemorating how God protected the Israelites as they wandered the desert in search of the Promised Land.

Rosh Hashanah begins Friday at sundown, customarily with the blowing of the shofar, the ram’s horn, a sound traditionally meant to wake up people from their slumber, or perhaps in this year’s case, quarantine.

“We are trying to find ways to replace the communal feeling (congregants) are missing by not gathering in person,” said Rabbi Joshua Lesser, who leads Congregation Bet Haverim in Atlanta.

He created a Facebook group called “Dreaming Up High Holy Days 2020,” which has gathered more than 2,700 rabbis, cantors and lay people in a conversation about how to adapt Jewish traditions to the present pandemic. That group has become a vibrant ground for creative ideas.

One way Lesser’s congregation is specifically adapting is by creating high-holiday boxes for congregants that include holiday candles, apple snacks, honey and notebooks for people to jot down reflections as they mark the high holidays wherever they are.

And they have created DIY high-holiday guides, which explain how to create a sacred space within the home that includes a makeshift altar and personal pictures or totems of significance.

“I can’t imagine I would have thought this way had services been as usual,” Lesser said.

A holiday of reflection

Traditionally, Rosh Hashanah is about acknowledging where we might have fallen short in the previous year and how to repair ourselves and the world in the coming year.

“You are invited to be publicly private, to be publicly present and say ‘I’m here to work on my personal stuff,'” Lau-Lavie said. “It’s true every year, but it’s especially true this year given the pandemic and the political moment.”

During the high-holiday season, he has enrolled hundreds in various challenges related to spiritual readings and personal commitments on topics including racial justice and immigration reform.

“These are the questions that you ask in therapy or with a coach or when you sweat your ass off in yoga,” Lau-Lavie said. “Who am I? Who do I want to be?”

JewBelong is offering online tools to help guide people through their own personal reflections.

Whether or not you’re Jewish, he explained, there’s value in the spiritual and emotional exercise of honestly contemplating your actions this year, and what you want most out of your life.

An opportunity to apologize

Maybe you’ve been fighting with someone, neglecting them or been dishonest to others, yourself or to the universe.

JewBelong’s tool enables you to write out exactly where you feel you may have missed the mark. Then you have the option to send that in an email, perhaps to yourself or to the person you want to apologize to.

Cast off those sins

One major theme of Rosh Hashanah is the tradition of tashlich in which people symbolically cast off their sins, often by throwing morsels of bread into a flowing body of water.

“Kids remember throwing sins into the river, or they may not remember anything else but they go to do tashlich — which is casting their sins — they remember that,” Stuart said. “Physical rituals really last.”

If finding a body of water nearby is too hard, you could just use your bathtub or sink, Gottesman added.

Or you can use JewBelong’s virtual tool, which allows you to input aspects of your life to improve. Examples might include faults such as jealousy or gossip, or more generally being afraid to try new things or finding fault in your partner’s body.

The English word “sin” isn’t necessarily the best translation of the concept, Lau-Lavie explained. A better way of thinking of it might be to examine where we are hitting the mark in our lives, and where we are falling short of the best version of ourselves.

It includes a prayer from the Rabbi Rachel Barenblat:

“I’m ready to let go of my mistakes. Help me release myself from the ways I’ve missed the mark, lift my troubles off my shoulders. Help me to know that last year is over, washed away like crumbs in a current. Open my heart to blessing and gratitude. Renew my soul as the dew renews the grasses.”

Finally, the New Year reflection gives us a chance to envision our future. JewBelong created a tombstone tool, asking people to type in what they might like to have written on their tombstone, encapsulating the meaning of their life.

It could be as simple as “He pet every puppy” or “She always took time to listen.”

Then you have a chance to add what you can do right now to start enacting that reality.

“It’s about ‘How do you want to be spending your life?'” Stuart said. “This is not a dress rehearsal.”

Another way of understanding the spirit of Rosh Hashanah, for believers and nonbelievers, is to think of it as a rigorous self-analysis of your past, present and future.

Lau-Lavie recommended making a list of habits from your past that are no longer serving you, figuring out what you can do in the present to course-correct and then making a commitment to live better going forward.