Regeneron: Covid-19 antibody treatments work, but they’re ‘not the path out of this pandemic’ 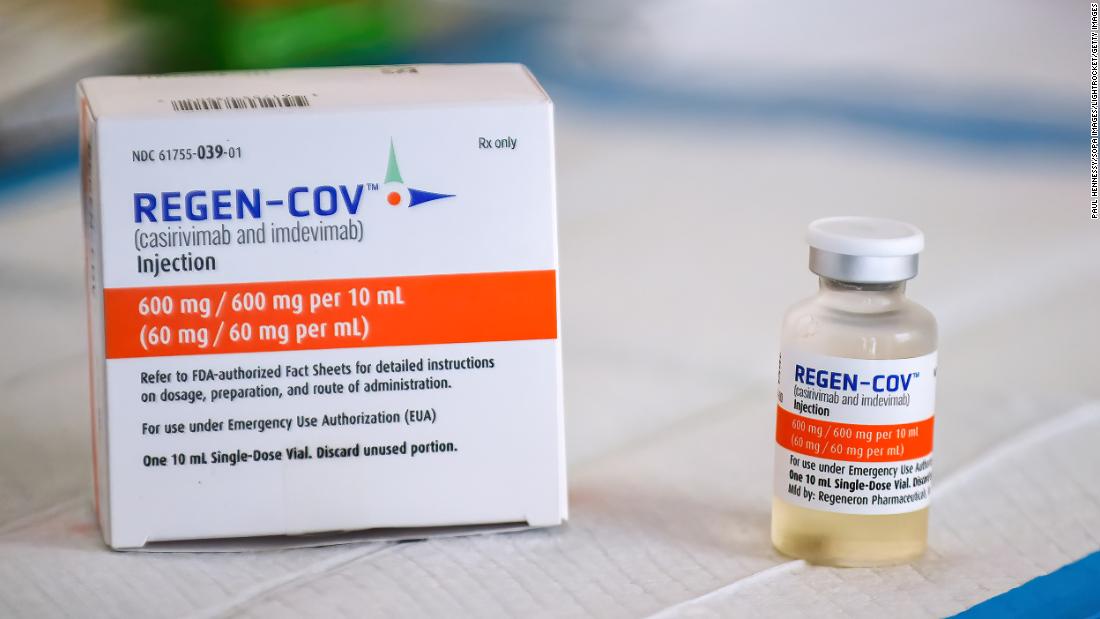 Monoclonal antibodies such as those made by Regeneron and GlaxoSmithKline won’t work for every Covid-19 patient; mAbs, as they are known, are only available for people age 12 and older and who aren’t hospitalized or severely ill.

Regeneron’s therapy can also be used for some people who know they were exposed to the virus, but don’t yet have a positive test. That protection doesn’t last long, though, and it’s not a replacement for the vaccine.

“These monoclonal antibodies, Regeneron and others, have proven to radically reduce the chance that somebody ends up being hospitalized and at the end of the day, reducing hospital admissions is got to be a top priority and if you reduce those admissions, people don’t go to the hospital to begin with, you know they’re going to recover and so that’s a really important thing,” said DeSantis, a Republican.

The treatments are effective at reducing severe disease; however, some scientists have been critical of the push for these treatments over other, easier prevention methods.

“We know what works to prevent people from contracting this disease in the first place, masking and vaccination. We should be focusing on these preventive measures,” said Dr. Leana Wen, an emergency physician and visiting professor of health policy and management at the George Washington University Milken Institute School of Public Health. “It’s totally backwards to say that we should be focused on treatment instead of emphasizing prevention, and the steps that we know work to stop Covid-19 in the first place.”

Here’s what you should know about monoclonal antibodies for Covid-19.

What is a monoclonal antibody?

Monoclonal antibodies are lab-made proteins, that can mimic the immune system’s ability to fight off threats like the coronavirus.

When a patient is infected it takes a little while for their body to produce antibodies that can help them fight the infection. These treatments, also known as mAbs, can speed up the body’s ability to fight infection.

Two mAbs made specifically to fight the coronavirus are in use in the United States right now.

The US Food and Drug Administration gave an emergency use authorization to a treatment made by Regeneron called casirivimab and imdevimab, and another made by GlaxoSmithKline called sotrovimab. So far, none have received full FDA approval.
In April, the FDA revoked its emergency use authorization and put a pause on the distribution of Eli Lilly’s antibody treatment bamlanivimab since it wasn’t as effective against variants in circulation in the US. In June, HHS announced a pause in the distribution of Lilly’s other treatment etesevimab, as well as its combination of the two monoclonals, as neither worked as well against the Gamma and Beta coronavirus variants.

Can they prevent Covid-19?

The antibody therapy made by Regneron is also authorized to be used as a preventative treatment, or what’s known as a post-exposure prophylaxis.

As prevention, the mAbs are meant to be used in patients who are not fully vaccinated, or in people who are not expected to mount an adequate immune response to a vaccine — like people who have had an organ transplant and are immunocompromised.

Who can get monoclonal antibody treatments for Covid-19?

The treatments for people infected with Covid-19 are for non-hospitalized adults and pediatric patients 12 years of age and older who have a risk of getting severe Covid-19.

Monoclonal antibodies are meant to be used early in the course of the disease to keep it from progressing. A patient who is sick should get the treatment as soon as possible after diagnosis and within 10 days of symptom onset.
Studies show monoclonals don’t seem to work when people are sicker and already in the hospital or on oxygen.

The drugs don’t come in a simple pill, so they wouldn’t typically be available at the average doctor’s office, but a doctor can prescribe them.

The infusion itself can take about an hour and then patients need to wait for an observation period to make sure there are no side effects.

How effective are the treatments?

In March, Regeneron announced patients who got its treatment within 10 days had a 70% reduced risk of hospitalization and death.

GlaxoSmithKline’s resulted in an 85% reduction in risk of hospitalization or death in high-risk patients compared to placebo.
As a prevention tool, a Regeneron study showed 72% protection against symptomatic infection in the first week, and 93% protection in subsequent weeks. Among the people who did have symptoms, those on the treatment cleared the virus faster and had a shorter time being sick.

Are there side effects?

Allergic reactions are unlikely, but possible. Worsening symptoms after treatment can also happen, according to the FDA.

How much do the treatments cost?

The US has spent more than $2 billion on monoclonal antibody treatment doses. But as of now, the treatment is free to patients, although there may be an administration fee.

Are the treatments hard to get?

For months, the government has tried to promote the use of mAbs, yet the US Department of Health and Human Services said as of August 6, the latest date it has figures for,that only about half of the distributed supply has been used.

“At this time, there is plenty of product available for existing and new sites,” a spokesperson for HHS told CNN last week.

As coronavirus cases have surged recently, the US has seen a 1,200% increase in orders for monoclonal antibody treatments in the past month, according to HHS. About 75% of the orders are coming from regions of the US that have low vaccination rates.

HHS also said it has seen a recent increase in the number of doctors using the treatments. Earlier in the year, the federal government had sent thousands of doses to states, but many sat on the shelf due to the complicated logistics of administering the treatments.

During the pandemic, health officials have acknowledged that doctors don’t always know as much about these treatments, and patients have had to push to get them, or drive long distances to find a center that will administer them.

What’s the difference between mAbs and a vaccine?

The protection from an antibody treatments doesn’t last as long as a vaccine though. Typically the treatment would only provide protection for about a month.

A vaccine takes a couple of weeks for the immune system to start providing protection, but monoclonal antibodies work right away.

If there’s treatment for Covid-19, why do we need vaccines or other prevention methods?

The treatments aren’t a cure, and they aren’t an option for every Covid-19 patient.

“The antibodies are an important complement to treatment options, but it is not the path out of this pandemic,” Wen says. “There’s only a small subset of patients who would qualify for monoclonal antibody treatment. Also, it is resource intensive, time intensive to administer.

“The way out of this pandemic is through vaccination and preventive measures to stop you from getting Covid in the first place.”