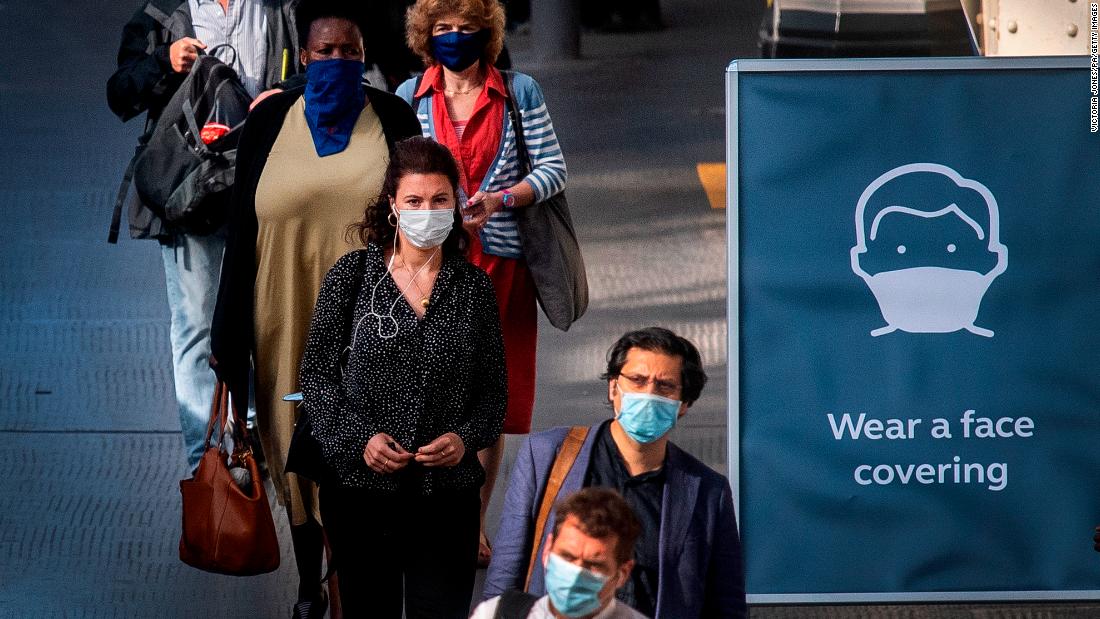 “The public have taken to handwashing and distancing but remain skeptical about face coverings,” Ramakrishnan said in a statement.

“You only need to go on public transport, where they are supposed to be mandatory, to see how many people are ignoring this new rule based on the growing body of evidence that wearing a mask will help protect others — and might even protect you.”

As per UK government advice for England, face coverings are required on public transport or when visiting hospitals.

“It used to be quite normal to have quite a few drinks and drive home, and it also used to be normal to drive without seatbelts. Today both of those would be considered antisocial, and not wearing face coverings in public should be regarded in the same way,” he added.

Ramakrishnan’s comments come as new evidence from the Royal Society points to the benefits of face coverings.

The first report — an updated report from the Royal Society’s Data Evaluation and Learning for Viral Epidemics Initiative (DELVE) — found that universal use of masks could prevent virus transmission, and also pointed to new evidence that suggested that face coverings could provide protection to the wearer.
The second report by the Royal Society’s SET-C (Science in Emergencies Tasking — COVID-19) group examined the effectiveness of different face mask types and coverings, and studied behavioral factors that limit adherence to mask wearing, including public understanding of virus spread, risk perception, effectiveness of public messaging, trust and barriers to mask wearing.

Researchers found that the UK was “trailing behind” other countries in terms of policy implementation and wearing face coverings, with mask wearing in the UK at around 25% in April, compared to 83.4% in Italy, 65.8% in the United States and 63.8% in Spain.

Researchers noted that while other countries, similar to the UK, did not have an “established culture of face mask wearing,” they had clear policies on face coverings.

“People may rightly ask why you have to wear a mask on a train but not in a shop. If guidance is inconsistent people will follow their own preferences,” Ramakrishnan said.

“The message has not been clear enough so perhaps people do not really understand the benefits or are not convinced of them,” he added.

Many health officials around the world are saying we must wear masks if we want to keep the economy open and save tens of thousands of lives.

In June, the World Health Organization updated its recommendations, calling for nations to encourage the general public to wear fabric masks in areas where there continues to be intense spread of the novel coronavirus — and for all health workers and caregivers to wear medical masks throughout their shift while in clinical areas.
The US Centers for Disease Control and Prevention now says everyone “should wear a cloth face cover when they have to go out in public, for example to the grocery store or to pick up other necessities,” and in June, the University of Washington’s Institute for Health Metrics and Evaluation said that if 95% of Americans wore face masks in public, it could prevent 33,000 deaths by October 1.

CNN’s Holly Yan and Jacqueline Howard contributed to this report.