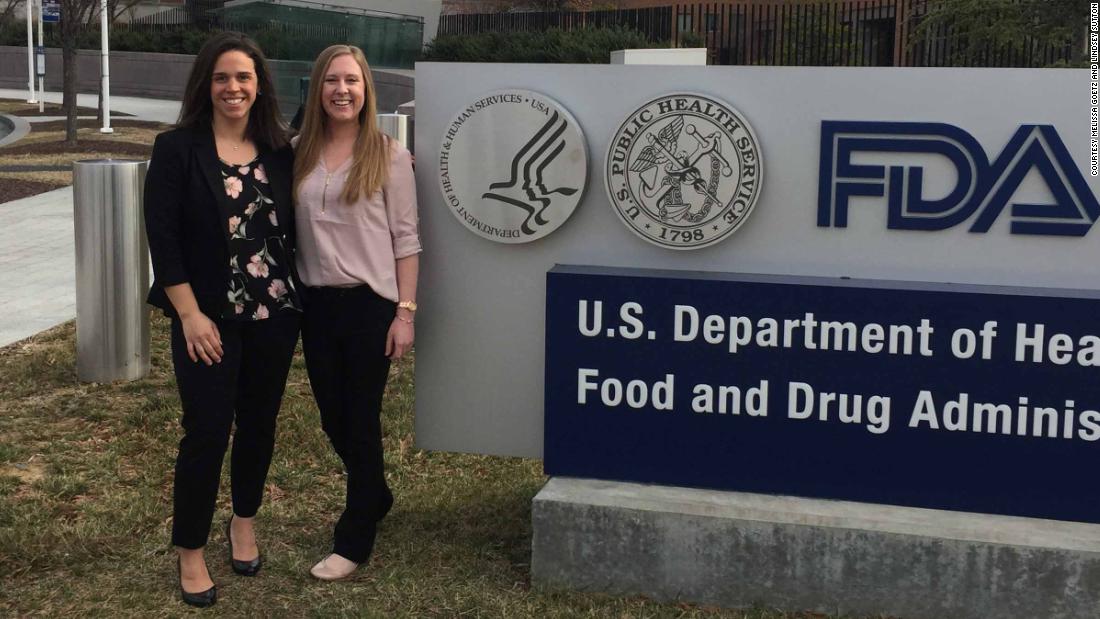 At 5 weeks old, she was diagnosed with a rare genetic disease called familial chylomicronemia syndrome, or FCS — a disorder that would lead to lifelong bouts of severe abdominal pain, liver problems and pancreas inflammation.

Years later in New York, Melissa Goetz found out her weeks-old daughter also had the disease, which causes a buildup of fats in the blood and can cause potentially fatal problems with the pancreas. Goetz’s baby would soon be hospitalized with pancreatitis, a liver infection and a kidney infection.

“She was vomiting, they drew her blood, and it was that strawberry milkshake-colored pink,” Goetz told CNN. “It was a very difficult time emotionally for me being postpartum and having her diagnosed with a rare disease.”

The FCS community is relatively small — only about one in 1 million people have the rare disease — so although they live on opposite sides of the country, Sutton and Goetz eventually teamed up to fight the disease.

No approved drug for their disease

Sutton and Goetz eventually met as members of a U.S. Food and Drug Administration advisory committee trying to find a treatment for FCS. (Apart from sticking to a strict low-fat diet, there are currently no FDA-approved therapies for FCS.)

During the clinical trial process, they noticed something strange — none of the medical experts on the committee had ever treated FCS patients or had much experience with the disease.

That realization prompted the two women to embark on a mission to change the process for reviewing drugs for rare diseases.

“It began with our frustrations of FCS, but as we were talking with other rare disease groups and sharing our frustrations and concerns with them, we realized that this was not only an FCS-specific issue,” said Goetz, who is co-president of The FCS Foundation along with Sutton.

“A lot of other rare disease groups were struggling to get treatments for their community as well.”

Despite having no prior government experience, Sutton and Goetz decided to work together over the course of three years to help draft a congressional bill that aims to ensure that rare disease experts and patients are more involved in the US drug review process.

That’s because some drugs, including treatment for FCS, are approved in the EU but not in the United States.

Finally, the HEART Act would require FDA rare disease program staff to participate in reviews for drugs to treat rare diseases. Those experts’ participation would be especially helpful when dealing with clinical trials that have small sample sizes, as many rare disease trials do.

The FDA’s advancement on rare diseases

There are more than 7,000 rare diseases, impacting an estimated 30 million people in the United States, according to the FDA.

The agency already has a department that works on rare disease issues, called the Office of Orphan Products Development. It works with the medical community, professional organizations, academia, industry and patient groups to “identify and designate products as promising for rare diseases and to further advance scientific development of such promising medical products.”

That office has developed more than 600 drugs and treatment products for rare diseases since the Orphan Drug Act was passed in 1983, according to the FDA. Meanwhile, the agency’s annual new drug report already includes a section on drugs for rare diseases.

But advocacy groups for rare diseases have argued that more could be done.

“In our mission to expand treatment access and reimbursement for patients living with rare and especially ultra-rare diseases, the first and most important issue is that drugs that can provide benefit are reviewed and approved,” said Haystack Project CEO Jim Caro.

“We applaud the FDA for their many recent efforts to address the unique needs of the rare disease community. The easy-to-implement modifications in The HEART Act represent a major advance in that process.”

The HEART Act remains in consideration by committee, but a spokesman for US Rep. Paul Tonko (D-NY) said his office is optimistic about the bill’s prospects, “especially since it’s starting out with bipartisan support” with co-sponsorship from US Rep. David McKinley (R-WV).

The FDA told CNN it would not comment on pending legislation.

However, the FCS Foundation said it’s aware the agency is already working to meet the needs of patients and families living with rare diseases.

“What we really like about this bill is it’s something that can happen sooner rather than later, and it can be absorbed and included into whatever the FDA is doing to improve, as well,” Goetz said. “Looking ahead to the next near, or next five years, just really continuing the conversation on rare disease.”

The two women behind The HEART Act hope that in the coming weeks on Capitol Hill, conversations about rare diseases and their treatments are anything but rare.