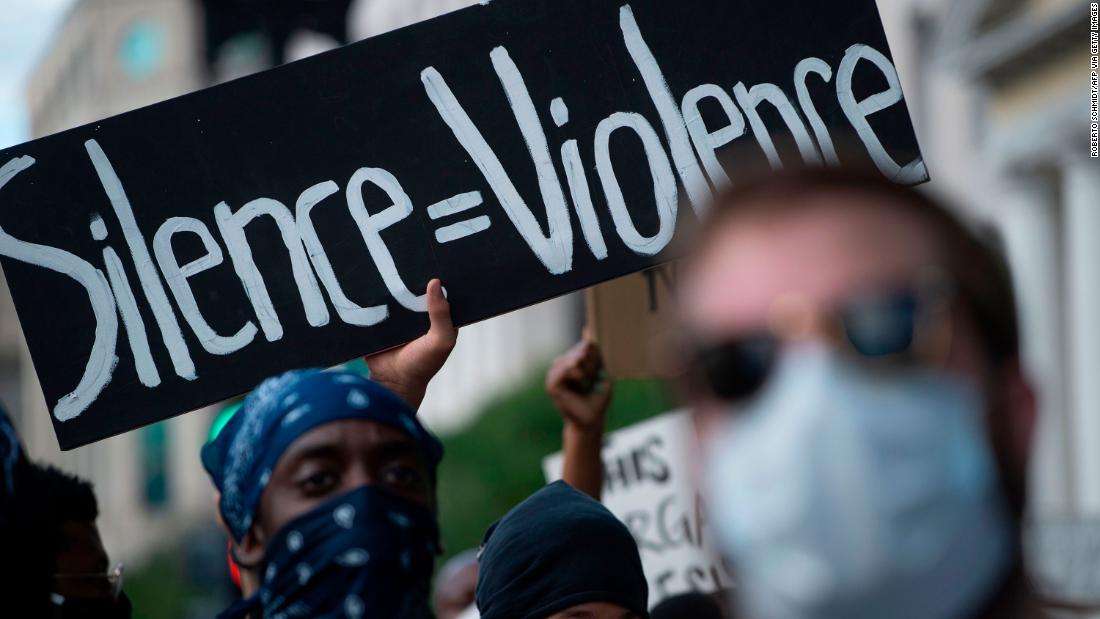 Microaggressions can be intentional or unintentional and sometimes even well-meaning. But they communicate hostile, derogatory or negative racial messages or assumptions to the receiver.

The ability to even notice these instances requires educating yourself about the experiences of black people in America and the significance behind such remarks.

Here’s a list of common microaggressions, the messages they send and what to say when you hear friends, family or colleagues say them.

The art of the comeback

Addressing microaggressions is more an art than a science, and it requires a lot of creativity, said Derald Wing Sue, a psychology and education professor at Columbia University in New York City. He studies the psychology of racism and antiracism.

Make the invisible, visible. “Oftentimes the perpetrator is unaware that they have engaged in demeaning or offensive comments, so you have to make that visible to them,” Sue said.

Educate the perpetrator by “[shifting from] the focus of what the person intended to the impact.

“Often when you turn to a person who engages with a microaggression and you point it out to them, they say, ‘That wasn’t my intention at all. Why are you so sensitive?'”

You lose the argument when you focus on intention because you can’t prove intent. Focusing on the impact as influenced by the significance, Sue explained, gets the perpetrator to understand what happened and how he might have caused pain.

Disarm the microaggression directly by steering the conversation away from a problematic remark or joke to communicate that it’s offensive. You’d be modeling good behavior to other people present, and you can have a later conversation with the person about why his joke was inappropriate.

‘You’re so articulate’ or ‘You don’t sound black.’

Why it’s offensive: This remark seems like a compliment, but it’s offensive to a lot of black people. They usually don’t have to be that articulate for someone to say that to them, Tatum previously told CNN.

What to say: “I know you meant that as a compliment, but unfortunately that connects to a larger history of people being surprised that black people can speak so well,” suggested Rev. Carolyn Helsel, an assistant professor of homiletics (the art of preaching or writing sermons) at Austin Presbyterian Theological Seminary and author of “Preaching about Racism: A Guide for Faith Leaders” and “Anxious to Talk About It.”

“It’s better to make your compliment something more specific about the content of someone’s speech rather than commenting more generally on people being articulate,” she added.

Why it’s offensive: This statement assumes that as the US Civil War concluded, so did racism, when really it has continued in new forms. There are books to read on modern slavery, racism and how white people still benefit from discrimination.

What to say: “I would say, ‘People aren’t asking you to accept blame,'” Helsel suggested. “‘People are asking you to see how all of us are connected in society. And one person’s disadvantage is, on the other side, one person’s advantage unfairly earned. So [it’s important to] understand how the system is disadvantaged and take responsibility for working for a more just society for all.'”

Why it’s offensive: Differences in racial privilege show up at a personal level, too. White privilege also means not having to stress over whether your hairstyle will cost you a job or even an interview. It’s not having to worry whether your skin color was the reason for your mortgage application denial.

What to say: Ask them if they’ve ever had any of these experiences because of the color of their skin, Helsel suggested.

Why it’s offensive: All lives do matter, but in this context it’s black lives that seem to matter less when they’re not being treated with respect.

What to say: Utilize metaphors that have been floating around social media, Helsel suggested: When a house is on fire, the fire truck doesn’t come and hose water on all the houses on the street saying, “All houses matter.” They’ve come to help the fire that’s burning.

Imagine at a funeral that someone is mourning the death of a loved one and you say, “Yeah, but my grandmother died five years ago. All deaths matter.” Both scenarios are insensitive to the pain of the people suffering in this moment.

‘I’m not racist. I have a black friend.’

Why it’s offensive: This statement equates racism with prejudice. Prejudice is an attitude based on stereotypes. Racism entails the policies and practices that uphold ideas of white people as superior and black people as inferior.

You may not be racially prejudiced, but knowing black people doesn’t keep you from engaging in discriminatory behavior or failing to challenge racist practices.

What to say: “Saying I can’t be racist is denying the larger social context in which all of us are living. It’s not about our individual intentions [or biases]. It’s about our collective work,” Helsel said. “So even if we have the best of intentions, as long as we’re supporting racist policies and ideas that undergird those policies, all of us can be racist.”

‘Can I touch your hair?’

Why it’s offensive: Curiosity is normal, but crossing personal boundaries is not. The question may seem innocuous, but it can make a black person feel as if she’s an animal on display — since the perpetrator likely wouldn’t ask that of a person of any other race.

What to say: Inform them that such a question is an invasion of personal space, Helsel said. How would she feel if someone asked that of her? It also taps into a history of black people being treated as curiosities and animals, without full rights to their own bodies. Tell them they can learn about such differences online. They can also compliment the person instead.

With any of these microaggressions, it can be useful to try to get to the root of the matter and have the perpetrator self-reflect by asking them why he felt the need to behave a certain way or ask a specific question.

Why it’s offensive: The intention is inclusive, but people of color are saying their color and identity matter and impact how they experience the world. But the statement is offensive because it could indicate that you aren’t listening to or are dismissing what people of other races are telling you.

Sometimes this remark comes from people who lived during a time when recognizing race meant segregation and discrimination, Helsel said.

What to say: “We need to try different tactics because saying we’re colorblind doesn’t acknowledge the implicit bias that still goes on and the systemic laws and policies that have made life harder for African Americans and other people of color to feel like they’re able to fully survive and thrive. To say, ‘I’m colorblind’ is to dismiss, ignore and make invisible the pain and suffering of people of color.”

Clutching your purse, dodging while passing a black man or unnecessarily calling the police.

Why it’s offensive: These behaviors suggest that black men are menacing. They stem from fear that responds to a stereotype that classifies black men as threats.

What to say: If you’re present during this situation and tensions are high, de-escalate the situation by asking the perpetrator to take deep breaths and explain to you what makes them think the person is a threat to them. Doing so invites them to reconsider and reprogram their gut response before calling anyone.

If authorities do come, stick with the person perceived as a threat through that experience, speak on their behalf regarding what actually happened and act as a witness for what happens during questioning.

Calling a black woman or man ‘sister’ or ‘brother,’ respectively.

Why it’s offensive: If the perpetrator doesn’t give everyone these nicknames, either statement claims kinship that probably isn’t there, suggested Rev. Shannon Craigo-Snell, a professor of theology at the Louisville Presbyterian Theological Seminary in Kentucky and coauthor of “No Innocent Bystanders: Becoming an Ally in the Struggle for Justice.”

“It’s claiming familiarity and intimacy,” she added. “And often when I see this happen, it’s actually in a situation where the white person is trying to gloss over real hierarchy of status or conflict.”

If the person hasn’t really interacted with black people before, she may also be unconsciously overcompensating when trying to make a connection by assuming that’s how black people talk.

What to say: Ask him why he said it and explain the significance. Then, suggest he maybe not call a black person “sister” or “brother” unless that person invited him to do so.

Why your response helps

If a receiver attempts to confront a microaggression, that can place them in jeopardy depending on the power dynamics within schools and workplaces, Sue said. They have to weigh how they’ll respond and the consequences, which is energy-depleting for them, he added.

White allies can help because they may be in an equal status relationship to the perpetrator. Unfortunately, they might be able to help validate what the subject of the microaggression is saying.

Talking about microaggressions is important because words matter, Helsel said.

“If our words are destructive, even unknowingly, we need to be able to change and to learn how to speak new words that can build people up and help people feel strong, included and embraced. … Our words have huge consequences literally in the life and death of our fellow human beings.”

If someone tells you that a remark you made was harmful, be open to criticism, thank them for bringing it up and apologize, Helsel added. Know the person isn’t trying to shame you, but that correction is coming from a place of encouragement to grow. Receive it with gratitude. You can ask what part you got wrong and why, Craigo-Snell said.

In the United States, we sometimes see only innocent versus guilty, she added. But people are more complex; they’re learners and it takes time.

“Our colleagues of color are constantly being taxed by microaggressions and the stress that goes with that,” Helsel said. “So it’s important that white people who are not operating under the same stressful conditions to be able to be bold and speak out, so that we can all be as productive and as fruitful in our work as we can be.”