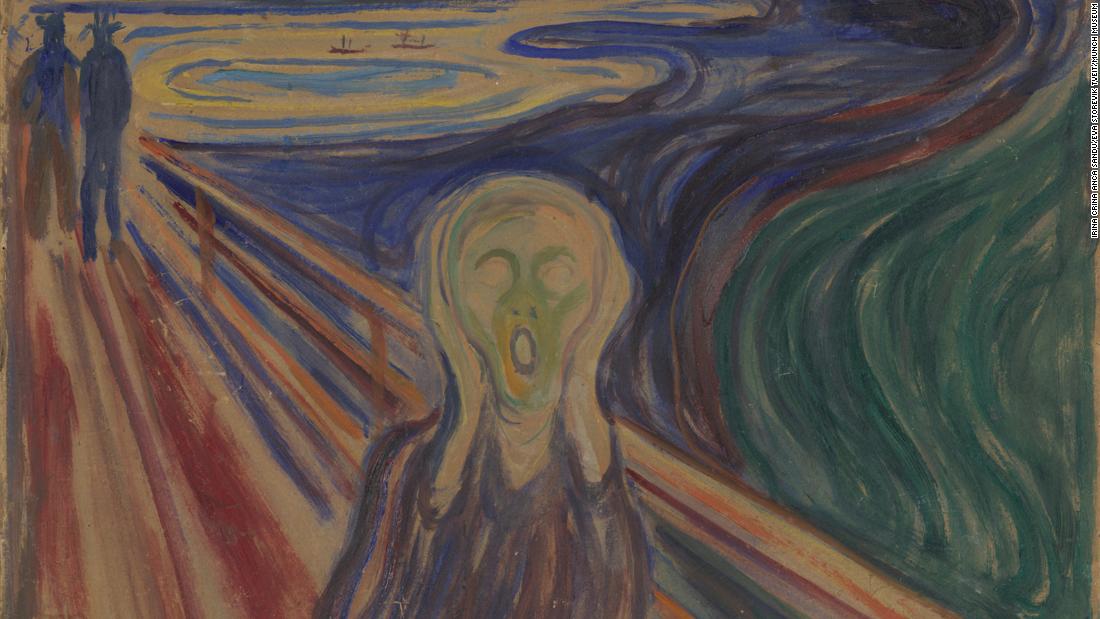 Over the last few decades, an unseen enemy has been degrading The Scream. The famous painting by Edvard Munch represents human anxiety and anguish and feels especially relevant during these uncertain times.

Now, thanks to new noninvasive research, the culprit has been discovered: moisture. And the good news is that this is a threat conservationists at the Munch Museum in Oslo, Norway, can manage.

The study published Friday in the journal Science Advances.

The cadmium yellow pigments Munch used in the painting have been flaking and growing discolored for years. The yellow in the sunset, sky and the figure’s neck have turned off-white, while thick yellow paint in the adjacent lake is flaking. Damage also occurred when the painting was stolen in 2004. The painting was finally recovered in 2006.

Since then, The Scream has rarely been exhibited, and the museum has protected it in storage conditions with controlled lighting, temperature and relative humidity.

In collaboration with the Munch Museum, an international team of scientists led by Italy’s National Research Council studied the painting to determine what was causing the degradation.

They used the European mobile laboratory called MOLAB (short for Mobile LABoratory) to study The Scream noninvasively at the museum. Follow-up research was conducted at the European Synchrotron Radiation Facility in France, which hosts the world’s brightest X-ray source, to study microflakes from the cadmium yellow paint.

This change occurred whether or not there was light present, which means that lighting is a minor issue compared to moisture.

For the researchers, it was a unique opportunity to help preserve a masterpiece and study it in detail.

“Indeed, the experience is unique and priceless, both from the personal and working point of view,” said study authors Letizia Monico and Costanza Miliani in an email to CNN. Monico is a researcher at Italy’s National Research Council and Miliani is the leader of the mobile platform MOLAB and senior researcher at the Institute of Molecular Science and Technologies, National Research Council.

“Usually when you look at a painting exhibited in a gallery, you appreciate its motif as a whole, its frame, its general museum environment, all in a relatively short period of time,” they wrote.

“When you are ‘face to face’ to the painting, you start obsessing about any tiny little detail, like the consistency of each single brushstroke, the different shades of colours used by the painter, the presence of small particles of dusts. You can feel the artist’s intention through the materiality of the artwork.”

This particular painting is a version Munch is thought to have completed around 1910.

The Scream is a motif Munch included in a series of works between 1893 and 1916, including four different versions in paint and pastel, lithographic prints, drawings and sketches. All are unique. But the two paintings, from 1893 (at the National Gallery of Norway) and 1910, are the ones that come to mind when The Scream is mentioned.

“Munch described the basic experience behind the picture as follows: ‘I walked one evening on a road. I was tired and ill — I stood looking out across the fjord — the sun was setting — the clouds were colored red — like blood — I felt as though a scream went through nature — I thought I heard a scream — I painted this picture — painted the clouds like real blood. The colors were screaming,'” according to a citation in the new study.

His use of “bold and brilliant” pigments created a contrast of saturated colors with glossy textures to create the “colors screaming” — but they also posed an issue in preserving the painting.

Based on their analysis, the researchers have advised that the painting can be preserved and displayed if moisture levels are kept at 45% relative humidity or lower and maintaining standard lighting.

Today, the painting and Munch’s other artwork are stored and exhibited at about 50% relative humidity and a temperature of 68 F (20 C).

“The museum is considering to apply the recommendations from this study in the future preservation and exhibition situation for The Scream,” said paintings conservator Eva Storevik Tveit and conservation scientist Irina Sandu, both at the Munch Museum and coauthors of the study, in an email to CNN.

“As this painting is one of the most famous and also highly sensitive/fragile objects of our collection, a good scientific-based strategy for its preservation is fundamental.”

They said as long as the painting is stable and doesn’t degrade further, there is no need to make any repairs or treatments to The Scream.

“This kind of work shows that art and science are intrinsically linked and that science can help preserve pieces of art so that the world can continue admiring them for years to come,” Miliani said in a statement.

The significance of The Scream

Munch was a fan of using these pigments in his other works, and so were his contemporaries like Henri Matisse, James Ensor and Vincent van Gogh. The researchers hope to continue their collaboration with the Munch Museum and strike up collaborations with others.

“We have already applied some of such noninvasive spectroscopic methods and synchrotron radiation X-ray microspectroscopy for the study of other well-known masterpieces, such as the Van Gogh’s Sunflowers version of the Museum Van Gogh in Amsterdam and Alchemy by Jackson Pollock at the Peggy Guggenheim Collection, in Venice,” said Monico and Miliani.

The findings from this study could be used to help preserve other paintings containing cadmium yellow paints by reducing their exposure to high moisture levels and maintaining standard lighting, they said. They acknowledged that the degradation process depends on the composition of the paint and the history of each unique painting and its exposure to various environmental conditions — as well as past restoration treatments.

“We strongly hope that in the future we will have the opportunity to study additional work of art by Munch and other artists contemporary to him, with the aim to add further knowledge to the materials used by the artists and to their corresponding degradation state,” Monico and Miliani said.

The significance of the painting suggests a complexity of emotion, and how others respond to it, that feels especially relevant during the pandemic.

“The Scream is a timeless painting, a symbol of the anguish and melancholy of modern and contemporary people,” Monico and Miliani said. “Especially during these uncertain times, everyone can recognize a little part of him/herself on the screaming figure. You can see your fears, your desire to escape from an uncontrollable and overwhelming situation.

“The figure resembles to a skeleton. However, the character is screaming, has a voice. It is not silent. That liberating scream of anguish and melancholy, if not ignored, can go back to being a feeling of hope and serenity.”

Preserving it for generations to come is something the Munch Museum regards as imperative.

“The Scream is emblematic for human anxiety and despair, but it is also speaking about the qualities and capability of human kind to relate to nature and society needs,” said Storevika Tveit and Sandu.

“Regardless of the situations in the world, the painting is a message that transcends the timelines of history, and its preservation and message are important for future generations. We can see it as a time capsule with a relevant content for humankind and that is why the mission we have here is so important.”